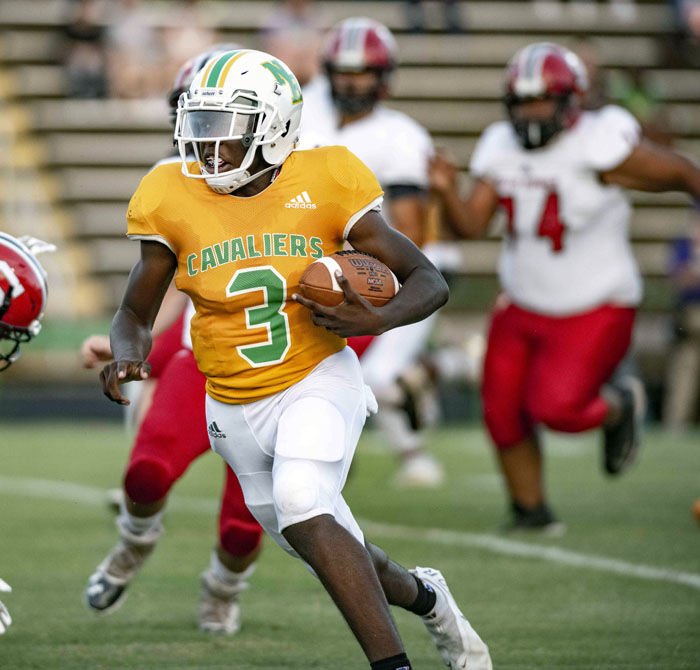 COVID-19 still seems to be lurking behind every goal post, so this won’t be the normal football season everyone was hoping it would be.

Salisbury, West Rowan, North Rowan and East Rowan sat out Week 1. Those teams got on the field in Week 2, but Carson did not.

South Rowan is the only Rowan team that is 2-for-2 as far as playing games. A.L. Brown also has played two, and the Wonders have won two.

As of Wednesday night, all games involving local teams were still on schedule for Friday. The weather forecast is warm, with no threat of rain.

What did we learn from the Week 2 scoreboard?

At the top of the list, defending state champion Salisbury is as good as the hype — and maybe better. Seeking a challenge, the Hornets took a long road trip for an early playoff atmosphere and running-clocked a competent, disciplined Polk County team 44-0.

To score a TD against Salisbury’s first-string defense this season, you’re probably going to need a turnover and a very short field.

Davie County’s offense is still scarier than a haunted house on a gloomy Halloween night. The War Eagles put 56 on West Rowan. Still not a record for the series. Davie beat the Falcons 63-7 in 1965.

The Falcons managed to score 30 themselves, with Peter Williams emerging as the new deep threat for Noah Loeblein, the county’s only returning QB starter.

The South Piedmont Conference looks as wide open right now as any seven-team league possibly could be. There’s no favorite. The Falcons have a lot of work to do in pass protection and points prevention, but they still might climb into the league championship mix.

South Rowan let a two-TD lead get away at North Rowan, but it’s still obvious the Raiders are better than they’ve been in a while. The last time South got on the field with North Rowan it was 51-0, so some things have changed. South has lost 14 straight to Rowan opponents now, but that streak should end at some point in 2021.

As far as North Rowan, the Cavaliers showed some guts by coming back, especially after South housed the second-half  kickoff. It’s almost a whole new team, but the Cavaliers will be OK.

East Rowan’s offense was close to non-existent in the second half in the loss to North Stanly, but new QB Aiden Schenck threw the ball efficiently to multiple receivers on an impressive 95-yard drive in the first half. North Stanly picked up the defensive pressure in the second half and some bouncing snaps put East in bad situations.

East’s defense played tougher than 28-6 sounds. The Comets had quite a few negative plays. North Stanly’s only first-half score was a pick-six. North Stanly hit a long pass play for its second TD, and its third TD came after a 5-yard East punt provided a short field.

Week 3 is another non-conference week for all the local teams. The most notable matchup is Mooresville at West Rowan. That’s because former West head coach Joe Nixon now guides the Blue Devils.

There’s just one county game on the menu, and it will be interesting to see what sort of game plan East attempts to execute against Salisbury. East head coach John Fitz and Salisbury head coach Brian Hinson were on some staffs together at Catawba. Hinson also coached some pretty good East teams a dozen years ago.

The programs meet for the first time since 2016.

You may be surprised to learn that the Mustangs own a five-game winning streak against the Hornets (2012-16), although it’s not expected to reach six.

Salisbury did just about everything right in its opener, with the defense pitching a shutout and new QB Mike Geter accounting for five touchdowns.

East’s defense generally played well last week, but the offense didn’t get much done in the second half.

The Blue Devils got mashed 48-9 by Hough last week, although Hough is going to mash most people.

West got mashed by Davie, but Davie is going to score a lot of points against most people.

Both teams really need this one, and it’s probably a tossup as far as who gets it.

Mooresville has had the better of things in recent meetings. The Blue Devils have won the last three, all season openers.

West’s most recent victory in the long-running series was 12-8 in 2016 when Nixon was piloting the Falcons.

All-time, Mooresville has won 28 of the 50 meetings.

North Stanly takes on another Rowan team this week, with the Cavaliers making the ride to New London to take on a familiar rival.

North Rowan was resilient in rallying to beat South Rowan, with freshman QB Jeremiah Alford throwing two TD passes and running for a TD. Sophomore back Jae’meis Morrow had 157 rushing yards on 11 carries and scored two TDs, including the game-decider in overtime.

The Comets shut out North Rowan 15-0 last spring when the teams were battling for the 1A Yadkin Valley Conference championship.

These athletic programs have traded places, with the Bulldogs moving down from 3A to 2A and South Rowan moving up from 2A to 3A.

Robinson is off to an excellent start with wins over Concord and Central Cabarrus, two teams that are in South Rowan’s conference.

South Rowan also is off to an encouraging start, although it couldn’t quite finish off North Rowan last week.

South has a 6-1 edge in turnovers for the season. The Raiders also made a big offensive jump last week with 330 yards of offense, after getting just 99 in their opener.

Carson anticipates being able to play this week, and it should be a victory if the Cougars can.

South Stanly, a 1A school in Norwood, didn’t scare anyone in lopsided losses to West Stanly and Southwestern Randolph the first two weeks. The Rowdy Rebel Bulls, as they are known, surrendered 100 points in those two games while scoring 12.

Carson lost to Statesville in Week 1.

Carson and South Stanly have never met in football. Carson has only played one game against a Stanly school in its history, losing to North Stanly 34-14 in 2019.

Rocky River provides the opposition for the Wonders in their last tuneup before things get serious. Greater Metro Conference play starts next week against Cox Mill.

The Wonders have played Rocky River twice previously, beating them in 2011 and 2012 in Memorial Stadium. This will be the Wonders’ first trip to Mint Hill to play in the Ravens’ Nest.

North Davidson has been wiped out by Reagan and Northwest Guilford and is allowing 42 points per game, so Davie might top 50 again.