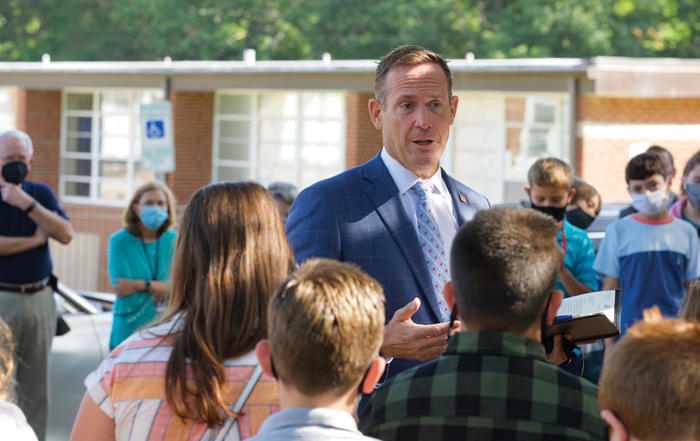 Carl Blankenship/Salisbury Post - U.S. Rep. Ted. Budd speaking to students at Faith Academy Charter School. Budd spoke to students and brought a donation of books from the Library of Congress.

FAITH — Faith Academy added 50 books to its growing library courtesy of the Library of Congress and Rep. Ted Budd.

Budd, a Republican whose 13th Congressional District includes Rowan County, arrived at the school Monday morning with a pair of aides to drop off the books and spoke to fifth-grade students in front of the school. The books are a mix of grade-level appropriate texts, fiction and nonfiction.

After opening its doors to students two weeks ago, the books will add to a collection that Academy Board Chair George Wilhelm says has grown into the thousands because of community donations.

Jennifer Rose Stoner, a fifth-grade teacher at the Academy, said she first reached out the the Library of Congress because she was interested in receiving books. Library staff advised that a representative’s office would have to facilitate the donation. So, she got in touch with Budd’s staff.

Stoner said the library is dear to her heart because it produced the audio tapes of books her brothers, who are legally blind, listened to while they were growing up. The visit was exciting for Stoner as well. She had never met Budd, and teaching about government is one of the standards for fifth-graders.

“It’s not every day you get to meet somebody that’s in Congress,” Stoner said.

Budd also took questions from students during the visit.

The students asked him about getting to Congress and whether he plans to go further.

In fact, Budd is running for U.S. Senate in a bid to take Sen. Richard Burr’s seat after he retires in 2022.

Budd positions himself as a supporter of “school choice” and independent institutions such as charter schools. Charters are public schools and receive tax dollars, but they are not tied to larger school districts and are treated as lab schools by the state.

“We want to support education in general, but we also like to see charter schools, innovations, making the most of taxpayer dollars and also getting really hard for education as well,” Budd said. “People are voting with their feet. These families don’t have to be here in the Faith community. They can choose other schools, but they chose here.”

Budd said he has not visited as many schools as normal during the COVID-19 pandemic, but he is hoping to restart visiting more schools.