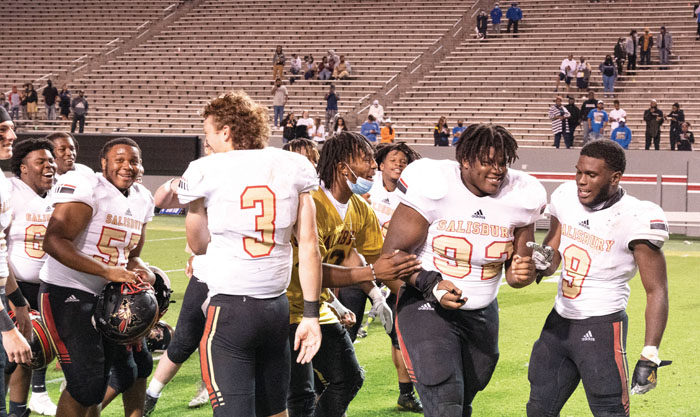 Josh Bergeron / Salisbury Post - At right, Salisbury’s Nicholas Hall, 92, jogs to receive his award for outstanding defensive players as his teammates cheer him on.

Hall is listed on the Hornets’ roster at 6-foot-1, 285 pounds, but the senior is even thicker than that.

“We got him on the scales as a junior, expecting 285, because he looks 285, but it was more like 310,” Salisbury head football coach Brian Hinson said. “He’s tremendously physical and strong and he had 24 reps bench-pressing 225 pounds as a junior. He squats about 500. But big and strong as he is, he’s also pretty darn athletic.”

As if on cue, Hall bounded upward and easily grabbed the rim of a basketball goal at the First Baptist Church gym where the Hornets were practicing on Monday.

Salisbury coaches knew what they had all along, but Hall wasn’t a household name for most fans until the final game of Salisbury’s championship season last spring. He made 10 tackles and was voted defensive MVP of the Hornets’ resounding 42-14 victory against St. Pauls that capped their 2AA title run.

Now, Hall, the nose guard, will be expected to excel every Friday. He leads a mostly new group. Reed Fugle is back, but all-conference defensive linemen Zae Clay, Kevin Hayes and Brandon Broadway graduated.

“We’ve got some new guys in there and we’ve all got stuff to work on, but we did pretty good for our first game,” Hall said.

That first game was Friday, a 44-0 romp on the road against a highly respected Polk County program that returned most of the firepower from a 6-2 squad.

Polk County produced a balanced 235 yards of offense in beating Newton-Conover in its opener.

Polk County managed 17 net rushing yards (there were quite a few sacks) and 79 passing yards while being running-clocked by Salisbury.

Polk County’s best-known player is Angus Weaver, regarded as of the best inside runners in the mountains. He had 39 yards on 10 carries, with Hall and Anthony Dodd stacking things up and allowing linebackers Jalon Walker, Amare Johnson and Jaden Gaither to finish plays off.

“What Polk got, they got early in the game when we lost contain on the outside,” Hall said. “But we tightened things up.”

Hinson said Hall’s most impressive play on Friday was changing direction, sprinting and helping to make the stop after a completed tunnel screen.

“Nick is good,” said Walker, the sensational linebacker who is headed to Georgia. “I’ve known him most of my life, ever since we were playing PeeWee ball. He’s always a great guy to be around, and he and the defensive line took care of business on Friday.”

Wesley Jackson, a firefighter, is Hall’s position coach. He likes the effort Hall plays with as well as the results he’s getting.

“Nick’s energy is always high and he can be unblockable when he chooses to be,” Jackson said. “As good as the seniors we had last year were, Nick can be every bit as good as any of them.”

That’s a strong statement. Clay was a two-time lineman of the year in a rugged, 10-team conference.

Jackson and Hinson both tossed around the “man child” description when asked for an assessment of Hall.

“He’s strong enough to just throw people around,” Hinson said. “He played really well in our first game. He’s still working on being consistent, but that’s true of most high school guys.”