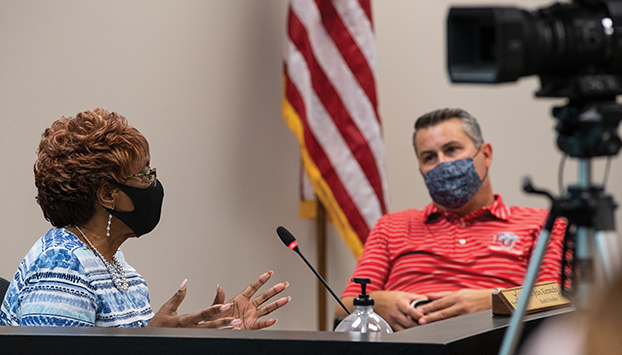 Josh Bergeron / Salisbury Post - RSS Board of Education member Jean Kennedy, left, speaks during Monday’s meeting as board member Dean Hunter looks on as the background.

SALISBURY – The Rowan-Salisbury Schools Board of Education in a split vote on Monday extended its mask mandate for all school facilities until the end of the first quarter, which is Oct. 11.

The mandate requires everyone in RSS buildings to wear a mask, with the exception of athletes playing on courts.

The 4-2 vote was the same as a previous one to institute a two-week mandate that expires Tuesday. Chair Kevin Jones and Vice Chair Alisha Byrd-Clark voted for the extension along with Jean Kennedy and Brian Hightower. Dean Hunter and Travis Allen voted against the motion. Following Susan Cox’s resignation, the school board has six members until a replacement is named.

The vote followed a discussion about the district’s latest COVID-19 statistics and quarantines.

Quarantines and infections have climbed rapidly since the district began classes on Aug. 11. As of Friday, there were 3,192 quarantines and 282 infections in students. There were 149 employees quarantined and 52 infections. RSS’ substitute provider on Monday was only able to fill 43% of the 282 teacher vacancies.

The district anticipates numbers leveling out. Chief Student Services Officer April Kuhn told the board more than 950 students returned from quarantines on Monday, but RSS administrators recommended extending the mandate based on the current numbers and quarantine rules.

Students who test positive and expose other students while not wearing a mask are subject to quarantine. The same is true for students who are exposed to unmasked students and those showing a long list of flu-like symptoms until they are cleared of COVID-19.

During the meeting, quarantines were a major topic of conversation. Allen described his own son being sent home after having stomach aches and being unable to find a clinic to test him for COVID-19 so he could be cleared from quarantine. Hunter criticized the list of symptoms are that can get a student sent home.

Watlington said the district should avoid being overzealous with its policies. He said the nurses are trained professionals doing the best they can, but they will make some mistakes like anyone else.