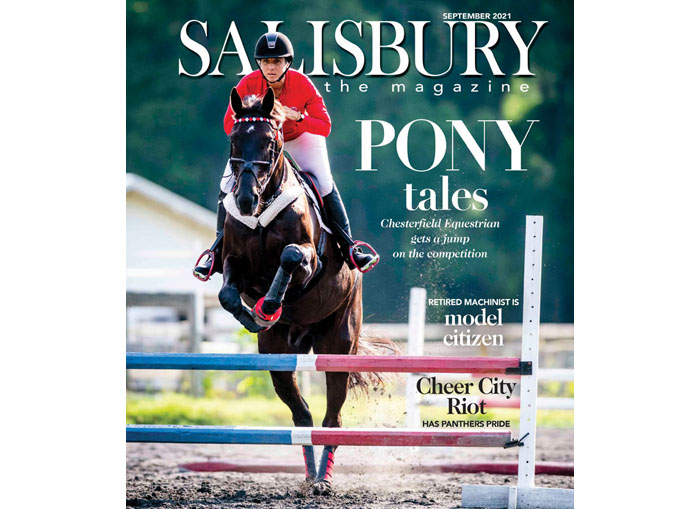 September cover of Salisbury the Magazine

SALISBURY — The September issue of Salisbury the Magazine, a publication of the Salisbury Post, has reached subscribers and is now available at its normal distribution spots elsewhere in Rowan County.

The cover shows Irish gelding Carlingford Castle and rider Katherine Thornton taking a jump during a training session at Chesterfield Equestrian in Salisbury. Inside, find a feature on Katherine and Bob Thornton’s farm, dedicated to horses, riders and the rigors of competing in horse trials up and down the East Coast.

Elsewhere, contributing writer Maggie Blackwell visits with Sam Bannister, a retired Duke Energy engineer and machinist who has dedicated part of his retirement to building miniature replicas of shop machines from the past. His attention to detail will impress you.

As the new National Football League season approaches, consider finding your roar by joining Cheer City Riot, the Salisbury chapter of Roaring Riot, a fan-based organization supporting the Carolina Panthers. This edition looks into how Cheer City Riot started and its partnership with New Sarum Brewing.

In the At Home section, Sherry Beck recounts the extensive restoration she and husband Steve did at their West Square Historic District home on West Fisher Street. Their home will be on this year’s OctoberTour.

Pete Prunkl, writing for Historic Salisbury Foundation, takes readers back to Salisbury’s streetcar era, which lasted from 1905 to 1938.

Most of the September stories feature the photography of Jon Lakey and Sean Meyers.

With Rowan-Salisbury Schools back in session, it was a good time for a quick Q&A with Superintendent Tony Watlington, this edition’s Rowan Original, and in Bookish, Alissa Redmond writes about Wiley Cash’s new novel.

Joel Honeycutt provided the photograph for Through the Lens. Celia Jarrett painted the Cheerwine Festival-inspired artwork for Salisbury’s the Place.

In addition, look for a September events calendar and Scene photos from the Chamber’s Dragon Boat Festival and the Faith Fourth of July Parade.

Salisbury the Magazine publishes nine times a year. Writers, photographers and designers are now putting the finishing touches on the October issue, which should reach subscribers in mid September and be distributed elsewhere in Rowan County toward the end of that month.