South has lost 13 straight games against Rowan opponents and hasn’t beaten North since 2002, but the Raiders played smart enough and tough enough on defense in the 14-0 Week 1 win against Parkland that some people believe South can do it again against a North squad that didn’t get to play in Week 1 and will be inexperienced everywhere except receiver and linebacker.

“It’s a good challenge for us,” South head coach Chris Walsh said. “North was a playoff team last spring and they’ve got a lot of speed.”

If you’re wondering when was the last time the Raiders won two in a row, South smacked West Davidson and stunned Thomasville back-to-back during the 2017 season. Unfortunately, the Raiders won only one other game that season.

While South-North is the only “county game” on the menu, there are plenty of intriguing non-conference affairs on Friday’s schedule.

West Rowan-Davie is often exciting and usually close. It is a traditional rivalry, although Davie handled the Falcons pretty easily in the spring and is favored to beat them again Friday in Mount Ulla.

Salisbury’s trip to Polk County should be entertaining and one of the more challenging regular-season tests for the Hornets. Polk County, which ended North Rowan’s season in the playoffs in 2017 and 2018, is good and made it three straight against the Cavaliers in a spring second-rounder.

Polk County is moving up from 1A to 2A and hammered Newton-Conover on opening night. That should get everyone’s attention.

East Rowan makes its debut at North Stanly, which has a game under its belt. That’s an edge for the Comets and for every other team in that situation.

Carson had a dismal start against Mount Pleasant when the teams met in the spring season and couldn’t climb all the way back. The Cougars get another chance against the Tigers on Friday, but Carson will be the underdog. Mount Pleasant is always sound and solid and shut out Central Cabarrus on opening night.

A.L. Brown takes on Sun Valley for the first time in 13 years, which means the Wonders missed out on UNC hero Sam Howell’s years at Sun Valley.

South will be looking for its first win against a Rowan opponent since it edged Carson 19-16 in 2016.

South produced less than 100 yards of offense, but handled Parkland in its opener thanks to a 4-0 edge in the turnover battle and a bend-don’t-break defense that gave up  8-yard runs but prevented Parkland from making big plays.

North has a talented group of wideouts, led by 6-foot-3 county 100-meter dash champ Amari McArthur, so South will have to get pressure on North’s QB. South got Week 1 sacks from Jacob Ritchie, Jonathan Moore and Aquiles Bernal.

South and North haven’t shared a football field since 2006. The Cavaliers routed the Raiders 51-0 in that one.

Neither team got to play last week, although Davie was able to reschedule Mooresville for Sept. 10.

Davie beat West 35-7 in the spring and still has elite offensive performers in running back Tate Carney (Wake Forest commit), quarterback Alex Summers and receiver Zaharee Maddox. Davie’s issues in the spring were in point prevention. The War Eagles fell short of the playoffs despite a ton of offensive production and a 5-2 record.

West still has QB Noah Loeblein, experienced running backs and a bevy of defensive returners and is expecting to contend for the title in the South Piedmont Conference.

Salisbury, led by Georgia commit Jalon Walker, should be somewhere between tremendous and stupendous on the defensive side of the ball, but there are lot of new faces on offense, especially on the line.

New QB Mike Geter will be hard to contain, and JyMikaah Wells can be one of the state’s best backs if the rebuilt line in front of him comes through.

Polk County doesn’t figure to be a pushover for last spring’s 2AA state champs. Polk County was a regional finalist in 1A in the spring and now makes the move up to 2A.

Polk County head coach Bruce Ollis is in his 17th season at the helm of the Wolverines and coaches hard-nosed, confident teams.

Starting QB Casey Beiler is still around for Polk County, as is 1,000-yard rusher Angus Weaver, a steamroller between the tackles.  Polk County features a solid run/pass mix, and has as good a chance as anyone to test Salisbury’s elite defensive players. 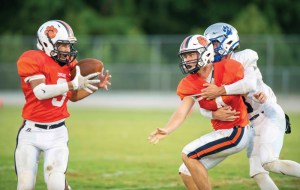 Mount Pleasant’s defense came up with five turnovers in a 24-0 shutout of Central Cabarrus in Week 1.

Mount Pleasant also showed offensive balance against Central, one of Carson’s competitors in the 3A South Piedmont Conference. Keandre Stedford rushed for 134 yard for the Tigers, while Lawson Little only put the ball in the air eight times but had two TD passes.

The offensive line was expected to be a strong point for Carson and the Cougars displayed a strong ground game in the 41-30 loss to Statesville in Week 1.

Carson rushed for 301 yards, netting almost 5 yards per carry. Jordan Galarza rushed for 120 yards, while Carter Dowd had 78 yards and two TDs. New QB Hunter Burris carried 11 times for 63 yards, but Carson only completed one pass in its opener.

Carson is 1-2 all-time vs. Mount Pleasant. The Tigers held off Carson 27-21 in the spring season.

Carson’s victory over the Tigers was 10-3 in the first meeting of the programs in 2013.

East Rowan didn’t get to play North Rowan last week due to a number of Mustangs being in quarantine, so East will be making its season debut at North Stanly.

East is mostly an unknown at this time, with new faces all over the place, including new QB Aiden Schenck and a fresh committee of running backs.

East thumped North Stanly 33-12 in the most recent meeting of the programs in 2019. East has won the last two meetings and leads the all-time series 18-7.

A.L. Brown has a stunning all-time record against a number of opponents.

Sun Valley prevailed in 2006. The programs haven’t squared off since 2008.

Sun Valley lost to Olympic 28-14 in Week 1. The Spartans connected on just 7 of 22 passes for 87 yards. Jaden Goeller ran for 100 yards, while Dakota Arnold was dynamic on kickoff returns.

Electric sophomore Xavier Chambers made most of the plays for the Wonders in a 28-20 win against North Meck. He scored three TDs — on a run, on a bubble screen and by going in motion and then sprinting past the defense for a reception.