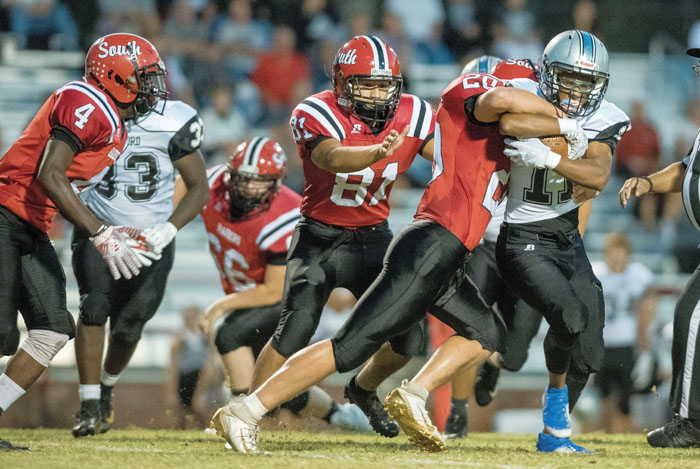 JON C. LAKEY/SALISBURY POST FILE PHOTO South Rowan's Gabe Pozyck (20) has the speed to often be the first defender to get to the ball for the Raiders.

LANDIS — The  track and field season proved South Rowan senior Gabriel Pozyck is one of the county’s most explosive athletes.

Pozyck had a long way to go, but he got to a fumble in the Parkland backfield before anyone else could.

“I saw a hole and I was starting to step toward it,” Pozyck said. “Then I saw the ball pop out. I got there and was able to scoop it, but then I got tripped up.”

He wasn’t able to score, but his effort did give South the ball at the Parkland 10. Four players later, Landon Richards put the ball in the end zone, and South owned the only points that were scored in the first half.

That sequence of events had to be devastating and deflating for Parkland, which possessed the ball most of a grinding first half, and, in fact, most of the game.

All told, Parkland ran 69 plays to South’s 30 and outgained South 216 yards to 99, but all that really mattered was South’s 4-0 edge in turnovers — and the final score.

“It was tiring — we were out there a lot on defense,” Pozyck said. “But it didn’t really matter that we were tired. We had to keep going.”

Chris Walsh was named as South’s new head coach in May, taking over a program that hasn’t been a winner in a dozen years.

What he found actually was better than what he expected. South had some athletes. Maybe the most impressive was Pozyck, who was a running back as well as safety in his days at China Grove Middle School.

Not everyone has a safety who was second in the long jump in the Rowan County Track and Field Championships (19 feet, 10 inches), placed third in the 400 (54.84 seconds) and ran a leg on the winning 4×400 relay team.

“Gabe is a really good player with aspirations to play on Saturday,” Walsh said. “As tough as they come and about as fast as they come. He’s been a leader from the start.”

South has been working diligently since May. Walsh’s upbeat personality and a mostly new staff (only Ron Riddle remains from the last group) inspired a big turnout of players.

“I’d say there’s been a 110 percent change in attitude,” Pozyck said. “The coaches have pushed us on and off the field to be the best we can be.”

Still, there was plenty of uncertainty heading into the opener against a 4A team. South had its struggles in the Rowan County Jamboree scrimmage with strong Central Davidson, and South switched to sophomore quarterback Jamie Klassette just two days before the Parkland game.

“I’ve spent some time in Winston-Salem and I knew Parkland would be a good football team,” Walsh said. “But I also knew how critical this first game would be for us. The first one is always so big because you preach to the kids about working hard. If they win, they get to see that all that work they put in really does pay off.”

Things rolled and bounced South’s way. South put the ball on the ground twice, but was able to recover its own fumbles. Parkland had killer penalties. Parkland’s lack of a kicking game greatly benefited the Raiders, who got tremendous punting from Jacob Ritchie. Three times he pinned Parkland deep.

“We believed in our guys and it was a chance for them to show that they are good football players,” Walsh said. “We didn’t try to do too much. We contained Parkland’s speed. We bent, but we didn’t break. It was a total team effort.”

Parkland had gotten pinned by a long punt shortly before that disastrous fumble in the second quarter.

Parkland punched the ball out to its 14-yard line, then tried a jet sweep with a slot receiver coming left to right. The handoff was mis-timed and South linebacker Justin Hill was able to disrupt the play. The ball hit the ground, and then Pozyck went sailing in there to get it.

Parkland ran 29 rushing plays in the first half, including gains of 18 and 16, but had absolutely nothing to show for it.

“They had the ball most of the half, but we had the lead at halftime,” Pozyck said. “When we left the field, we left with a good confidence. We knew we could come out in the second half and do it again.  We knew we had a chance to open some eyes to what we can do.”

South’s defense made a 6-0 lead stand up throughout the third quarter. The Raiders finally got the insurance score in the fourth quarter. Parkland got pushed back inside its 5-yard line by a good punt and a sack and was only able to wobble a punt out to its 24. Two snaps later, South scored on a 23-yard pass play from Klassette to JD James. Then Ritchie caught a 2-point conversion flip for a 14-0 cushion.

Parkland’s final drive wasn’t going to change the outcome, but it was a matter of pride for both teams. Parkland wanted to score so badly it called a timeout with less than a second to go. South was equally determined to deny the visitors a trip to the end zone.

“It was important to us,” Pozyck said. “We wanted the shutout.”

South achieved that rare goose egg. Javarus Jackson intercepted a pass in the end zone on the final play. The Raiders were able to celebrate some history as well as a win.

For his part, Pozyck made a team-high 13 tackles. He also had one of the louder hits of the night when he pancaked a Parkland player who attempted to block him on a kickoff return.

“He made clean tackles and big hits, and he played a strong game mentally,” Walsh said. “He made good reads. He played with focused aggression.”

Next for South is a road game at North Rowan.

South has lost its last 13 games against Rowan County opponents and hasn’t won against the Cavaliers since 2002.

But South is 1-0, and as Walsh said, that first one can be huge.

“We talk about attitude, mentality and effort and our guys gave us all three of those things last week,” Walsh said.  “Now we want to keep it going.”