‘The Life of a Brakeman’ exhibit at Transportation Museum tells the story of a courageous, determined railroad worker 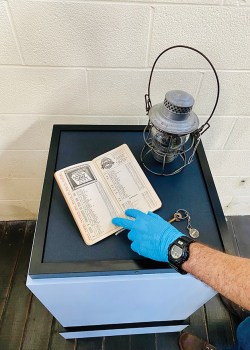 Three of the artifacts on display in "The life of a Brakeman" exhibit: a record book, lantern and identification key. The book features Whittington's written name and the lantern and key are similar to items he would have carried. Photo submitted. 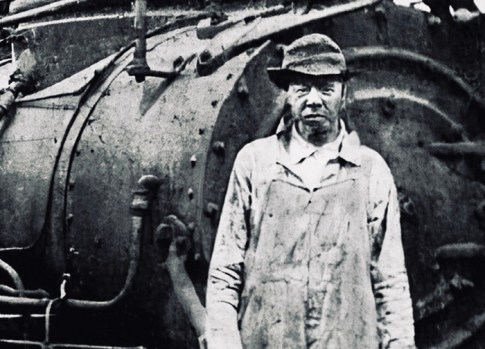 George Winslow Whittington stands in front of a locomotive. There are numerous pictures of Whittington featured in the exhibit at the North Carolina Transportation Museum about his career and life in the railroad industry. Photo submitted. 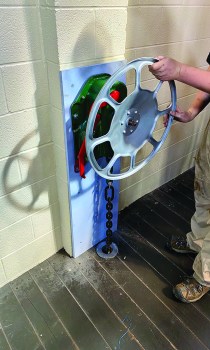 The interactive brake wheel being installed at the NC Transportation Museum. The wheel will give visitors a chance to simulate one aspect of Whittington's job. The brakeman had to stop wheels on moving trains. In this photo, the exhibit has not been completely finished. Photo submitted.

SPENCER — As a teenager, Regina Lynch-Hudson loved hearing stories told by her aunts and uncles about her brave grandfather.

A brakeman for Southern Railway for several decades in the mid-1900s, George Winslow Whittington was tasked with manually stopping the large locomotives traversing tracks in western North Carolina. The already perilous position was made even more so by the fact that Whittington was a Black man during segregation.

Overcoming those challenges, the Black Mountain resident worked as a brakeman from 1926 to 1963 during the advance from steam- to diesel-powered locomotives

Now, thanks to the records, items and pictures provided by Lynch-Hudson and other descendants, Whittington’s story will be told through a new exhibit coming to the North Carolina Transportation Museum. Titled “The Life of a Brakeman,” the installation will be permanently added to the “How the West Was Won” exhibit contained in the Bob Julian Roundhouse.

“The Life of a Brakeman” exhibit will officially open to the public on Saturday.

“It is an unparalleled level of fulfillment in seeing the deserving stories told of ancestors who overcame great obstacles to leave legacies of lives of service,” Lynch-Hudson said. “It’s fulfilling because these are stories will continue to be told and will keep on giving for generations to come.”

Lynch-Hudson, a semi-retired publicist and travel writer who lives in Atlanta, has been collecting and preserving her family’s history for decades.

“I have always found the history, especially of people of color in western North Carolina and people in my family, to be interesting,” Lynch-Hudson said.

The quality photographs and accurate information compiled by Lynch-Hudson and her relatives over time have helped them preserve the history of their ancestors in multiple museums. Whittington is one of four of Lynch-Hudson’s ancestors who were featured in an exhibit in the Swannanoa Valley Museum & History Center in Black Mountain last year.

Aware of the N.C. Transportation Museum’s mission and focus, Lynch-Hudson submitted an application to have Whittington featured in an exhibit. The museum immediately expressed interest and Lynch-Hudson and Whittington’s son, Les Whittington, provided records and other information. From there, the museum’s staff began curating an exhibit that is both informational and interactive.

“They designed and breathed life into an idea I submitted to them,” Lynch-Hudson said.

“The Life of a Brakeman” exhibit was primarily created and constructed by Exhibit Designer Matt Skeen and Collections Manager Xavier Klonowski. In addition to two graphic panels with images and text about Whittington, the exhibit features a documentary video produced by Lynch-Hudson and an interactive brake wheel that gives visitors a chance to simulate Whittington’s job — albeit at much lower stakes.

The wheel itself is from an actual locomotive, but Skeen and the museum’s staff have worked for months to ensure that the wheel poses no danger to those attempting to stop it.

“We’ve had to do a lot of engineering to make it safe and for the mechanism to actually work,” Skeen said.

The exhibit also contains a lantern similar to the one Whittington would’ve used and a railway record book that was previously contained in the Transportation Museum’s archives featuring Whittington’s name.

“The Life of a Brakeman” installation, Skeen said, fits in seamlessly with the rest of the “How the West Was Won” exhibit, since the overall exhibit showcases how railroads impacted the industrial and cultural development of mountainous western North Carolina.

“This man, whose story we are telling for this particular installation within this exhibit, is a really interesting story that’s a smaller piece of that grand story,” Skeen said.

Through various items, the exhibit showcases the inherently dangerous nature of Whittington’s job. During his career, Whittington walked atop moving boxcars as trains rocketed along tracks that often went through tunnels and around winding bends.

The exhibit also sheds light on the experience of a Black man working in a world where he was not treated equally.

“I think in honoring him, (the exhibit) brings to light what Black people really contributed to building this nation,” Les said. “I know he’s not the only one, but he sure enough was a really good one at this job. It was tough for a Black man to get a job at that level where he had that much responsibility. It made me proud.”

One time, after falling from a moving train and breaking several ribs, Whittington was transported to a hospital where he was turned away because it only served white people.

Overcoming race-related and sometimes life-threatening obstacles, Whittington had a successful career and was able to send almost all of his nine children to college, Les said.

Despite his adrenaline-infused job, Whittington was a reserved person away from the tracks.

“It was a daring job that required nerves of skill, but his persona was like a gentle giant,” Lynch-Hudson said. “He was a very gentle, quiet man.”

“He had such a strong work ethic and he knew those trains from A to Z,” Les said. “He probably could’ve done any job on those trains had he been called on. He would take us and he would watch the trains. He would tell us what everybody’s job was. He was excited about it. He loved it.”

The N.C. Transportation Museum is located at 1 Samuel Spencer Dr. and is open on Tuesday-Saturday from 9 a.m.-5 p.m. and on Sunday from 12-5 p.m. More information can be found online at www.nctransportationmuseum.org or by calling 704-636-2889.