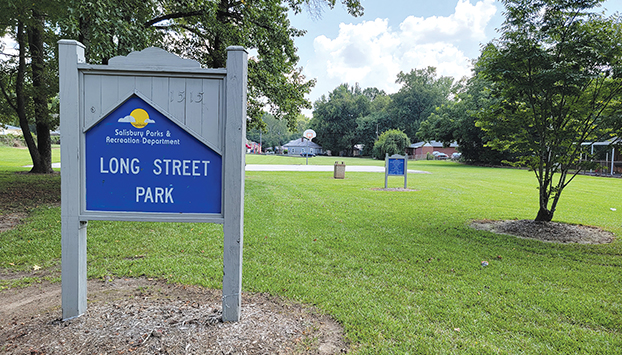 Exposed on the ground, the flash-bang grenade would normally be used to blind and disorient a suspect. Its name describes how the device explodes — creating a blinding flash and a loud bang. So, it was out of place near a playground in the city of Salisbury park, which is off of North Long Street and near the East Spencer town limits.

As kids played football in a nearby field, Daugherty covered the device with a piece of cloth.

Remembering the experience Monday morning, Daugherty told Robert Wood, his legal guardian, about it. Wood didn’t believe him at first, but they went to the park to double check. The flash-bang grenade was still there.

“I’m glad that I did teach him about safety first because he did the right thing and didn’t tell the other children when he saw it,” Wood told the Post.

Daugherty said he hoped to avoid one of them pulling the pin on the grenade and trying to throw it.

“He’s a hero because he didn’t pick it up and he saved lives by telling me and not the other children because they would have picked it up,” Wood said.

Rather than leave it on the playground, Wood brought it home and called Salisbury Police.

Sgt. Russ DeSantis of the Salisbury Police Department said the flash-bang grenade is of an unknown origin. Wood said officers told him the device wasn’t one used by Salisbury Police, but Wood wondered aloud whether it was left at the park after a house in the area was raided.

Wood said he hopes the incident will be an example of why it’s important to teach children to be vigilant.

DeSantis said the incident is still under investigation.