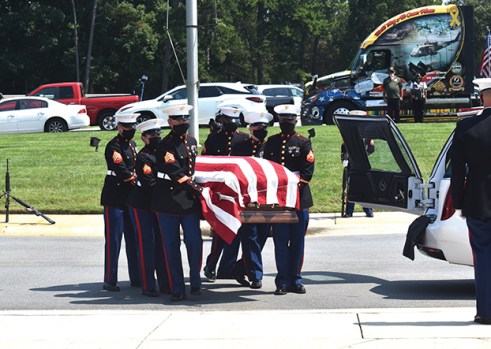 Henry Ellis, a Salisbury native and Marine who was killed in action in 1950, was delivered on Monday to his final resting place at the Salisbury National Cemetery annex on the campus of the Salisbury VA. Ben Stansell/Salisbury Post 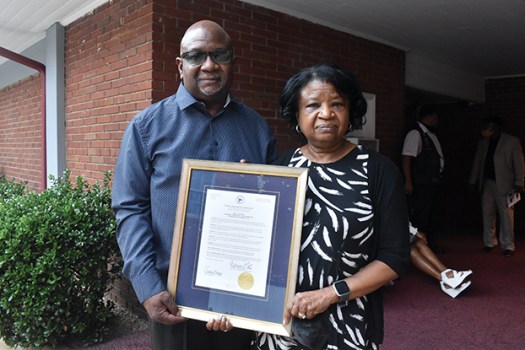 Bernard Cowan and Trudy Neely, Ellis' nephew and niece, stand outside Noble and Kelsey Funeral Home with a proclmation honoring Ellis passed by the Rowan County Board of Commissioners. Ben Stansell/Salisbury Post 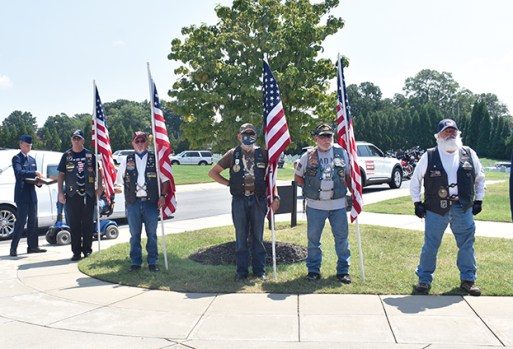 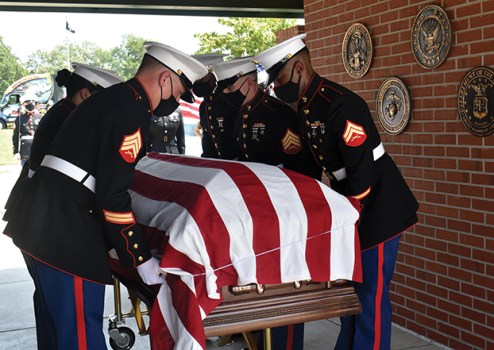 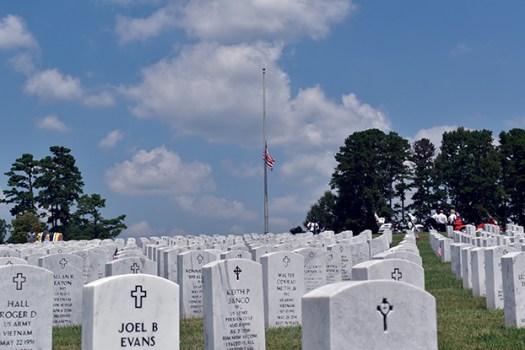 Gov. Roy Cooper on Friday ordered American and North Carolina flags at state facilities to be flown at half-staff Monday to honor a Salisbury veteran. That included the flag at the Salisbury National Cemetery annex, where Ellis was finally laid to rest. Ben Stansell/Salisbury Post

SALISBURY — More than 70 years after he was declared killed in action, Pfc. Henry Ellis was delivered to his final resting place Monday afternoon.

Ellis, a Salisbury native, was killed in combat on Nov. 30, 1950, in what’s now North Korea. For about seven decades, the whereabouts of his remains were a mystery. A renewed effort to identify remains labeled X-13631 started in 2012. With the help of DNA donated by his descendants, a Department of Defense medical examiner in September 2020 labeled those remains as belonging to Ellis.

On Friday, those remains were delivered by plane to Charlotte Douglas International Airport. They were then transported by procession to Salisbury, where Ellis spent the first 14 years of his life. On Sunday, Ellis lied in state from 1-3 p.m. at Noble and Kelsey Funeral Home.

Under the sweltering summer sun on Monday afternoon, dozens gathered at the Salisbury National Cemetery annex on the campus of the Salisbury VA to give Ellis the funeral ceremony he never received.

“I’m filled with pride and at times I’m filled with tears because it’s been such an emotional journey,” said Trudy Neely, Ellis’ niece. “I’m sad that I didn’t get to know him, but I’ve gotten to know a lot about him through this process and I feel so proud and honored to bring him to his final resting place.”

Neely and her daughter submitted DNA early on in the process to help the Department of Defense identify Ellis.

“I can’t tell you how good it feels to know that we helped identify him,” Neely said.

Neely and her brother, Bernard Cowan, had the option to have Ellis buried at Arlington National Cemetery in Virginia, but elected to have his final resting place be in his hometown.

“This is his home and that way we can visit the grave,” Neely said.

Although Ellis spent the early portion of his life in Salisbury, he moved to Roanoke, Virginia, with his father in his early teens. At just 14, he was registered for selective service by Bethlehem Steel Company. A statement attributed to Ellis and provided to the Post said the teenager told the draft board he was only 14, but he was given options that included going back to work for the steel company or getting a birth certificate.

Instead, he enlisted in the Marine Corps on Nov. 9, 1943, at age 15. He was in service when World War II ended, reenlisted when he was 18 and went on to serve in Korea.

During the funeral service, Neely and Cowan were presented with a congressional gold medal honoring Ellis from the Montford Point Marines Association. The organization is dedicated to memorializing the legacy of the first African Americans to serve in the Marine Corps, who trained just a few miles away from Camp Lejeune Montford Point. Before heading off to war, Ellis was trained at Montford Point, too.

“The Marines say to one another that they will leave no Marine behind,” Cartwright said. “And with that type of knowledge, I would hope all of us would have the courage to do what’s necessary. What we see here today is an opportunity to fulfill that pledge or promise to our fellow Marines and to your family members. We are thankful for this opportunity at such a time as this in our nation’s history to see and hear the story of honor, courage and commitment.”

The funeral service was followed by a ceremony at the A.R. Kelsey Memorial Chapel at Noble and Kelsey Funeral Home in downtown Salisbury. Representatives from Gov. Roy Cooper’s office presented Cowan and Neely with a signed proclamation from the governor, who also ordered American and North Carolina flags at state facilities to be flown at half-staff Monday to honor Ellis.

Ellis was brought to Salisbury on Friday from Charlotte by a procession on I-85 led by Reggie Hunter, a veteran and member of the Statesville Chapter of Rolling Thunder — a group dedicated to bringing full accountability for prisoners of war and missing in action service members. Hunter, a coworker of Bernard, organized the procession. In addition to local law enforcement, numerous veteran and military organizations collaborated to make the procession safe and efficient.

Hunter was leading the way on his motorcycle.

“It’s been a long process,” Hunter said. “It has been an honor to bring this hero home.”