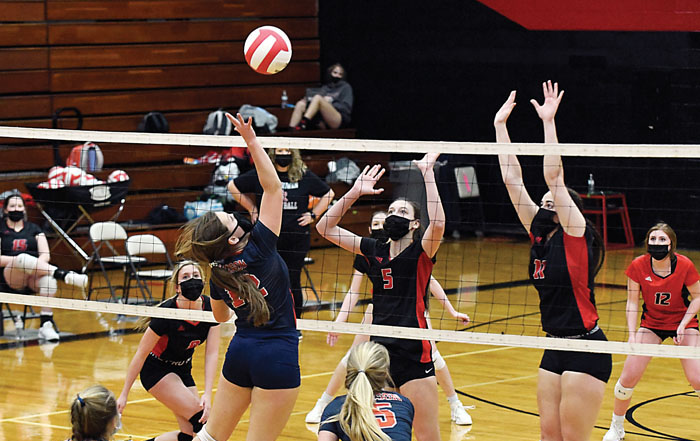 Carson's Allie Burns (12) returns the ball during a game against South Rowan in 2020. photo by Wayne Hinshaw, for the Salisbury Post

The Cougars won’t have Jaden Vaughn and Kary Hales, four-year high school standouts and now college players, together on the floor for the first time since 2016.

The best-known returner for Carson is long-time head coach Kelan Rogers, who guided the Cougars to back-to-back regional championships and 3A state runner-up efforts in 2012 and 2013. Rogers’ Carson teams have won 200 more matches than they’ve lost, while playing in some killer leagues, so there’s no doubt he’ll get the most out of his latest group.

Carson doesn’t have anyone on the roster with career stats in the Vaughn/Hales category, so it will take a collective effort by all the Cougars, who have a mix of returning role players and newcomers.

“We’re going to be inexperienced in a lot of spots,” Rogers said. “But I’d say there’s also a lot of bright spots.”

“Their main role right now is going to be blocking,” Rogers said. “We might have had more blocks in our first four games this year than we had all last season.”

Gianna Patella is a returning starter at middle hitter. Vaughn got most of the sets last season, with good reason, but Patella was solid and has started off this season strong.

Allie Burns, who is only 5-foot-3, played out of position as a hitter last season, and while she produced 50 kills, she’ll be in a role where she’ll have a greater chance to excel this season. She’s the replacement for Hales, one of the all-time diggers, at libero.

“We needed Allie to hit last season, but libero is the role she’s best suited for,” Rogers said. “That’s where she’ll be.”

Grace Goldstein and Kahlil Cross have plenty of varsity experience and will be used mostly in back-row defensive roles. Goldstein was fourth on the team in digs in the shortened COVID season.

Elly Davis accounted for more than 100 digs for the Cougars last season as a defensive specialist, but is switching to the setter position.

Abbey Dennis, who missed a couple of weeks with a concussion, is another potential setter.

Victoria Story is another experienced returner. She started some matches as the right side hitter last season.

Stefanie Stutt played some last season and is another right side hitter.

As far as new faces, Carson will count on outside hitters Laney Reilly and Aubin Capello and freshman middle hitter Kaylee Thonen. They’re all in the 5-7 to 5-8 range.

Carson has started 1-3 in non-conference play, although Rogers believes the Cougars should be better than that.

The issue so far has been hot streaks by the opponents.

“We had Central Davidson beat until they score nine points in a row and we had Hickory Ridge beat and they score 11 out of 12,” Rogers said. “I really think if we’d just played average, we’d be 3-1 right now. We’ve found ways to give points away in bunches in the early going and we’ve got to get past that.”

Rogers is excited about the new league Carson is in, a league with four Rowan schools.

“How could you not be excited,” Rogers said.

Just about everyone sees West, based on returning players, as the favorite.

“I do think we can finish first in the conference if everything comes together,” Rogers said. “But we could finish fifth if it doesn’t.”

Carson volleyball at a glance:

Early season: Cougars are off to 1-3 start