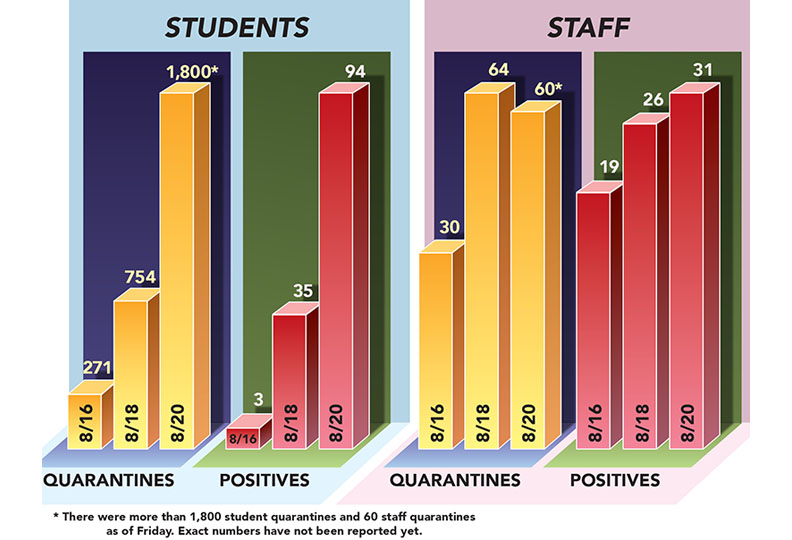 Numbers indicating how many students, left, and staff have been in quarantine due to COVID-19 exposure and have tested positive for COVID-19. *There were more than 1,800 student quarantines and 60 staff quarantines as of Friday. Exact numbers have not been reported yet. Graphic by Andy Mooney, Salisbury Post.

SALISBURY — Data provided Friday afternoon by Rowan-Salisbury Schools show 94 students have tested positive for COVID-19 and at least 1,800 are quarantined.

The number of quarantines is nearly double the peak during the district’s spring semester and equal to about 10% of the student population. Staff cases and quarantines have remained steady at an 31 cases and at least 60 quarantines. Chief Student Services Officer April Kuhn said she anticipates classes will continue as normal on Monday.

During an emergency meeting on Wednesday, Superintendent Tony Watlington told the RSS Board of Education the number of quarantines in the system could lead to shutdowns and would generally not be conducive to educating students if changes weren’t made, including mask-wearing policies.

When the Board of Education held its meeting, the district had 754 student quarantines and 35 infections. Those figures were a significant jump from the previous Friday when there were just three student infections. Kelly Education, the company that manages the district’s substitute teacher program, also could only fill about half of the district’s 200 absences that day.

Faced with those statistics, the Board of Education reversed course on a previous decision for masks to be optional and put a two-week mask requirement in place for everyone inside schools.

Kuhn said the district anticipated numbers would be indicative of local conditions, and there is some lag in the data as new cases appear. She said the district will address closures on a case-by-case basis depending on how many people are absent from a school and who the staff are.

“We look at ways we can keep kids in schools and if we have enough staff to monitor and run the school safely,” Kuhn said.

During last week’s emergency meeting, board member Travis Allen, who voted against the mask mandate along with Dean Hunter, suggested RSS wait to make a change until the district reached the previous threshold of quarantines.

Rowan County Health Department Director Alyssa Harris, however, says quarantines are a tool to break the chain of infection. Local health departments are given authority by the state to order quarantines.

“I am very passionate about kids being in schools,” Harris told the Post.

Harris said teachers prefer in-person learning, kids need structure and parents need to work. If the district had started the year with masks, it could have prevented as many kids from missing school.

Students who are in close contact for more than 15 minutes with one of those students infected while not wearing a mask is considered an exposure. The state gives local health officials three options for quarantines in schools: 14 days, 10 days or seven days. Harris picked 10 days.

Those ranges are based on when symptoms appear. After 10 days, health officials expect to catch at least 90% of symptomatic cases. Harris said 10 days is reasonable to prevent spread and lowers the burden on families compared to 14 days.

Healthy people who have been exposed are told to quarantine because symptoms do not appear immediately. The amount of virus someone takes in is a factor in how quickly someone gets sick.

“The more viral load you have, the sooner you’re probably going to get sick,” Harris said.

According to the Centers for Disease Control and Prevention, symptoms begin to appear anywhere from two to 14 days after exposure.

In the case of the delta variant of COVID-19, which now makes up a vast majority of new cases, it replicates more efficiently in hosts and spreads more easily.

School board members also pointed to initially higher rates of COVID-19 quarantine after returning to school full time last year, and that everyone was wearing masks. That point is irrelevant because at that point there was no exception to quarantine for kids wearing masks.

Now, students properly wearing masks are exempt from quarantine if both the infected person and the people within 6 feet of them were wearing masks. The exemption only applies to students. Faculty and staff still have to quarantine after being exposed unless they are fully vaccinated.

Harris said people surprisingly are understanding when the department asks them to quarantine. The bigger challenge is getting in touch with people with whom they may have been in contact. The person may not remember everyone they interacted with or be embarrassed to share names of people they could have infected.

The department looks for people in contact with COVID-19 positive people to inform they may need to quarantine as well. In the case of schools, it is more clear who was in proximity of an infected person.

When people are told to quarantine, the Health Department doesn’t follow them and make sure they’re listening to instructions. Early in the pandemic, when there were only a handful of cases, the department was trying to keep up with people. That is impossible with hundreds of infections every week.

“We are not the quarantine police,” Harris said.

“Obviously, the more staff we lose across the district, it increases our level of difficulty,” Chief Operating Officer Anthony Vann said. “We all roll up our sleeves.”

Vann said absences due to quarantine are different from a typical absence that lasts maybe two days. Staff and students quarantine for 10 days after an exposure.

Before the pandemic, Vann said, finding bus drivers was difficult. The pandemic has made finding drivers even more challenging and they may need to quarantine.

Do masks cut down on spread?

The Centers for Disease Control and Prevention, citing more than 10 studies, says universal masking causes infections to fall and lowers mortality. The center also claims masks have no adverse health effects on wearers.

A critical part of how masks work is preventing viral particulate from leaving the wearer’s nose and mouth so it can infect another person.

Rowan-Salisbury Schools managed to keep its schools open all year last year with a mask mandate in place and without the exceptions to quarantine included in the latest state guidance.

On Tuesday, Dr. David Priest, an infectious disease specialist with Novant Health, told reporters masks are a good idea, and noted special concern for environments where people are gathered close together indoors.

The reason for the exception to quarantine for students wearing masks, according to the CDC, is very low risk of transmission in classrooms when masks are being worn.

RSS board members have cited personal choice, freedom and social benefits for masks. When the board voted to make masks optional in July, parents described their children not wanting to wear masks in school.

Faith Academy Charter School is opening for its first year of classes on Monday. Last week, the school’s board voted to strongly recommend masks, not require them. School buses are an exception.

A few parents spoke virtually at the Faith Academy meeting and said they were not in favor of masks. One parent spoke in favor of a mask mandate. The only parent who attended the meeting in person spoke for a few moments and told them he would like to start the year with optional masks and adjust based on conditions.