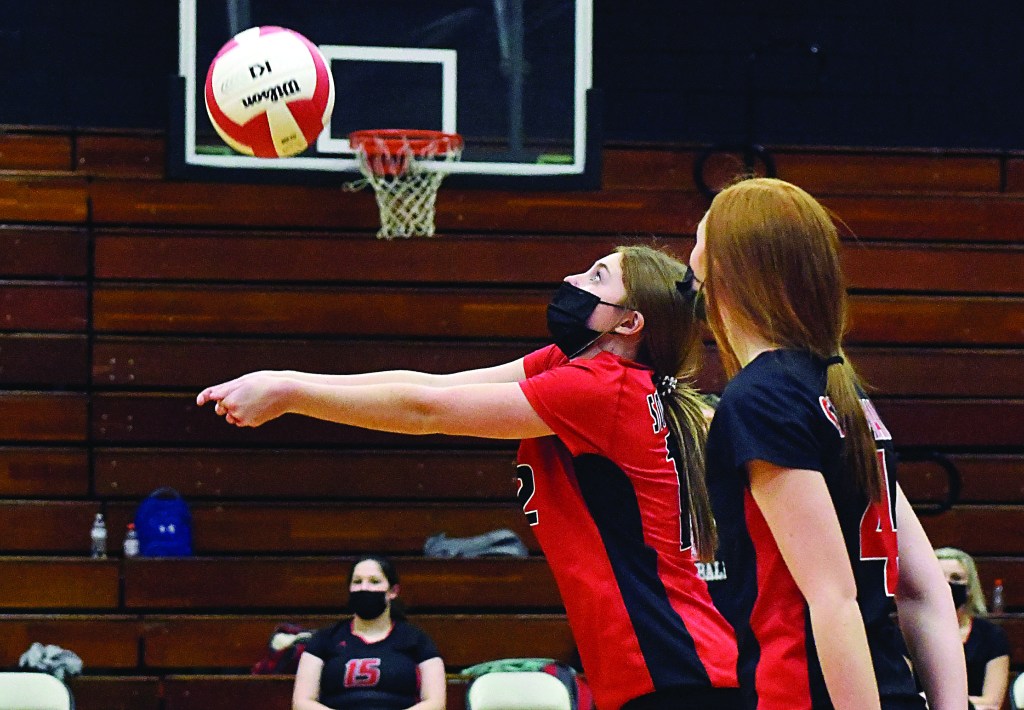 South's Payton Black returns as one of the county's best defenders. File photo by Wayne Hinshaw, for the Salisbury Post

LANDIS — South Rowan will rely on everyone on an eight-person varsity volleyball roster to help replace Anna Rymer.

It won’t be an easy task. Rymer, who is playing in college at Ferrum, was a tall, skilled player who put up extraordinary hitting and kill percentages and controlled the middle.

But South moved on successfully after graduating Janiya Downs. Then it moved on after saying goodbye to Kira Rymer.

So even after losing a third superstar in a three-year period, South has a chance to maintain its prominent position in county and area volleyball.

One Rymer remains. Sophomore Leah Rymer, last year’s full-time setter, will be in a mixed role of setter and hitter.

Emma Owens, a senior who saw limited action last season, will be the other setter in South’s modified 6-2 rotation.

“Unlike the last three years, we don’t have that go-to hitter,” said South head coach Jenna Horne, a math teacher who logged her 100th victory at South last season. ‘We’ll have to spread it around and share the love. But we can make it work.”

Senior Payton Black, one of the county’s best defenders, returns to anchor the back row.  Even in a shortened season, she had 486 digs last season. She topped 40 digs in three matches against quality opponents.

Junior Cameron Black, Payton’s sister, is an athletic outside hitter and made a major jump last season. She was second on the team in kills and digs and led in aces.

Senior Kali Nelson was a steady contributor in a lot of areas last season and will be counted on for more digs and more kills.

Sophomore Avery Welch was mostly a jayvee but played a little for the varsity at the end of last season.

Freshman outside hitter Meredith Faw and versatile junior Ava Huffman are new faces on the roster.

Welch, Huffman and Rymer will all spend some time in the middle.

“We’ve only got eight, but it’s a solid eight,” Horne said. “We just can’t get hurt and we can’t get sick.”

South’s new 3A league figures to be a lot more challenging for the Raiders then the 2A Central Carolina Conference, a league South steamrolled to the tune of 58-5 over a four-year period. South took regular-season and tournament championships its last two years in the CCC.

Playing West Rowan, Carson and East Rowan twice a year as South Piedmont Conference opponents will be hard work, but it also will be exciting and fun. Lake Norman Charter is good in volleyball, and rounding out the new league are Central Cabarrus. Concord and Northwest Cabarrus. The Cabarrus schools will be dangerous, but probably not as strong as the Rowan squads.

South took routine victories against A.L. Brown and Salisbury early this season, but lost a five-set struggle with Mount Pleasant.

‘Very intense match,” Horne said. “Mount Pleasant has a bunch of seniors and they were as good as we’ve seen since the (state champion) Fred T. Foard team we lost to in the fourth round of the playoffs in 2019. We made too many unforced errors to beat Mount Pleasant, but the girls are working every day. We’re getting better.”