Briscoe, Hamlin will get chance to settle their differences on track today at Michigan 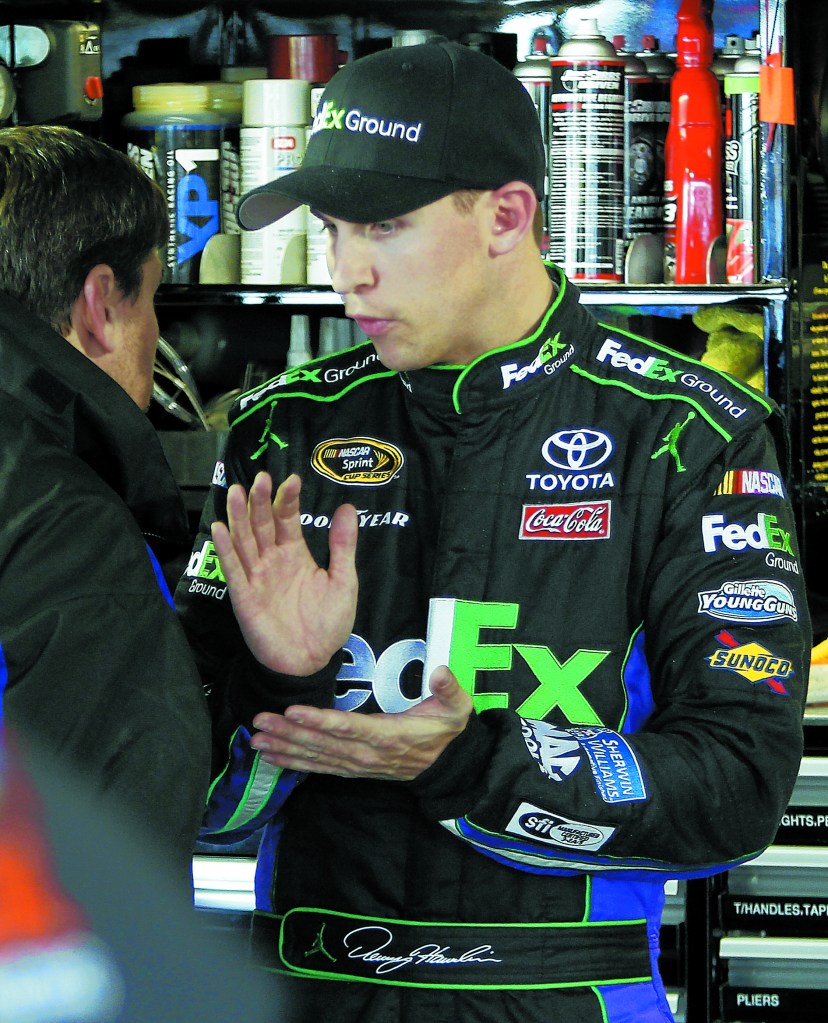 They’ll have a chance to settle the score today at Michigan.

During a week many teams scrambled to repair damaged cars while plotting strategy for NASCAR’s return to oval racing, Briscoe and Hamlin continued their debate over the spinout that cost both championship contenders a possible trip to victory lane.

“We can’t race that way,” Hamlin said after Briscoe sent Indy’s race leader spinning on the second-to-last lap. “I don’t think he did it (maliciously). I’ve raced with him for a year now. He’s not that kind of person, just bad judgment.”

What exactly took place in those closing laps won’t soon be forgotten.

A deteriorating curb sent nine cars off course with five laps to go and seven more crashed shortly after a restart following the curb’s removal. Then in the second overtime and final restart, Hamlin forced Briscoe wide heading into the first turn, and as Hamlin navigated the course, Briscoe drove through the grass and came out side by side with Hamlin. When Hamlin pulled out to a small lead, Briscoe tapped the No. 11 Toyota, sending it into the grass — at about the same time Cup officials radioed Briscoe’s penalty for cutting the course.

“Soooo the 14 didn’t know but yet acknowledged it on the radio? Ok, gotcha, noted,” Hamlin wrote on Twitter.

“That was my crew chief’s voice, anyone that listens to us weekly knows that’s not my voice plus I never use the word ‘copy’ I always say 10-4,” he wrote. “Feel free to call or text me if you don’t wanna go back and forth on here.”

Neither driver took questions this week and it was unclear if the conversation continued in private.

Now both are in the Irish Hills region of Michigan trying to build momentum for the Cup chase. Hamlin has already clinched a playoff spot despite not winning yet this season. Hamlin reached victory lane 13 times in 2019 and 2020 but hasn’t been back since winning at Talladega in October.

The 29-race drought and the fact Hamlin failed to win the Brickyard again despite being in position to win it late in the race accounts for some of the frustration.

A win today certainly would help Hamlin, who finds himself second in points behind Kyle Larson after leading most of this season.

Briscoe would qualify for the playoffs with a win.

NASCAR’s stop in Michigan has been a one-man show recently.

Kevin Harvick has won four of the last five here, including each of the last three races held on the 2-mile oval.

If Harvick makes it four in a row, he would lock up a playoff spot — and tie Bill Elliott’s record for most consecutive race victories at Michigan. Harvick, who won the 2014 Cup title, also owns the most wins (five) among active drivers on the track and, like Hamlin, is still seeking his first win in 2021.

He’s 15th in the points heading into this week and could also clinch a playoff spot today based on points — if there’s a repeat winner or a winner who is ineligible for the postseason.

Fourteen drivers already have clinched playoff spots and two spots remain as the regular season winds down with its final two races.

Sixteen drivers, including Harvick, are in with a win. Ryan Newman, Tyler Reddick, Daniel Suárez and Bubba Wallace are also on that list.

And there will be a change. Race organizers are using resin on the track to help with grip instead of PJ1 TrackBite.

“I think we’ve got a shot,” said Ross Chastain, another playoff hopeful. “They don’t want to make it too slick or too gripped-up. They’re just trying to find a happy medium. And if they get it in the box where we can race in it, then we’ll have a lot more options for racing.”

Harvick is the only driver who can qualify based on points, and Larson can clinch the regular-season Cup crown — if he expands his points lead to 61 this weekend. Larson moved into the No. 1 spot last week by finishing ahead of Hamlin and now has a 22-point edge.

Larson is today’s betting favorite at 13-5, just ahead of Kyle Busch and Martin Truex Jr. according to Fan Duel. … Spire Motorsports announced Thursday that Corey LaJoie will miss this week’s race because of COVID-19 protocols. He will be replaced in the No. 7 Chevrolet by Josh Berry. Berry drove in Friday’s truck race and Saturday’s NASCAR Xfinity Series race. … Sunday marks the first oval race for Cup drivers since July 18 at New Hampshire. … Ford has won the last six races at Michigan.

He screamed into the radio while crossing the finish line. He scaled the Michigan International Speedway fence. Then he paused to savor the moment fans started chanting his name.

Now Allmendinger doesn’t doesn’t want it to end. Just six days after the biggest victory of his career, the NASCAR Cup Series’ Brickyard 200, Allmendinger drove back to victory lane — this time by taking the lead with four laps left in regulation and holding to win the Xfinity Series race in triple overtime.

He beat Bradon Jones to the finish line by 0.163 seconds.

For nearly two decades Allmendinger struggled to stay competitive and relevant in IndyCars and stock cars. Now, at age 39, the Californian might be going through the best stretch of his career.
A little more than 24 hours after finishing as the Xfinity runner-up in Indy, he and Kaulig Racing made their first trips to the Brickyard’s historic victory lane together.

This time, the No. 16 Chevrolet made a daring pass on the outside of Josh Berry, side-drafting into the lead with help from the trailing Jones who moved into second.

From there, a series of yellow flags turned the race into a shootout. Jones lined up behind Allmendinger for each restart and they worked in tandem to close it out, giving Allmendinger his third win this season and eighth of his career. Noah Gragson finished third, and Berry was fourth.

“Of course Brandon wants to win the race, but he was great,” Allmendinger said after winning the longest Xfinity race in Michigan history, 139 laps. “I think he knew if we got side by side we’d probably hurt ourselves and not give either one of us a chance to win.”

But for much of the day, it appeared Berry would be fulfilling his own dream scenario.

While Allmendinger was golfing in Indy on Monday, JR Motorsports announced it had hired Berry as the full-time driver in the No. 8 car next season. On Friday, Berry finished 15th in the Truck Series race in suburban St. Louis and, on Saturday, he charged from the 40th and final starting spot on the grid to the lead in the closing laps of regulation. He just couldn’t find a way to get around Allmendinger in overtime.

But Allmendinger made sure his script remained the same.

“I spent a lot of years in NASCAR barely sniffing a win, not even close to it you know?” he said. “I had two wins in 2013 with Team Penske on the road courses and the Cup win (in 2014) and went another five years without really ever coming close. I don’t know when it’s going to go away, so I’m going to enjoy every one I get.”

Allmendinger won the second stage of the race and became the first stage winner to reach victory lane at Michigan.

It looked like that honor might go to points leader Austin Cindric after he won the first stage. But his day ended shortly after the second stage began. Cindric was one of seven cars collected in a crash. Crew workers removed a damaged hood, which covered his windshield, and he returned to the track, earning three more points before ending his day.

Emmitt Smith, the NFL’s career rushing leader, is joining the Xfinity Series as a part owner of Jesse Iwuji Motorsports.

Iwuji is fielding his own team as an owner-driver and now he has Smith on board. Smith joins a growing list of former sports personalities to get involved. The list includes names such as former NFL coach Joe Gibbs and former NBA stars Michael Jordan and Brad Daugherty.

Iwuji is from near Dallas and serves as a lieutenant commander in the U.S. Navy Reserve who has been racing part-time in the series since 2018. He’s one of two Black drivers regularly competing in a national series. Bubba Wallace competes in the Cup Series.

In a race interrupted by a power outage that knocked out the lights for about an hour early in the second stage, Creed swept the stages and led 142 of 163 laps on the 1.25-mile oval.

The 23-year-old California driver wrapped up an automatic spot in the next three-race round of the playoffs, winning for the second time this year and seventh in two seasons.

“My guys put together such a good truck” Creed said. “We’ve been working hard all year and obviously haven’t had the speed at times and I’ve made mistakes at times. But we were able to build this brand new truck and I feel like we’ve taken everything we’ve learned this year and applied it. They gave me a hot rod today and I couldn’t be happier.”

After a caution set up an overtime shootout, Creed kept the No. 2 GMS Racing Chevrolet ahead of Matt Crafton and Ben Rhodes — with three-time series champion Crafton passing ThorSport teammate Ben Rhodes for second.

“I love late-race restarts,” Creed said. “I didn’t want it, but when it came out I was just thinking, ‘OK, just focus and execute.’ This is huge. I’ve had such a stressful month trying to figure out what I’m doing next year, so many mixed emotions on what I’m going to do and if I’ll even have a ride. Biggest thing is to keep winning and get ourselves in the Championship 4 and execute.”

Stewart Friesen was fourth, with the top four all in the 10-driver playoff field. Carson Hocevar was the only other playoff driver in the top 10, finishing eighth. Hailie Deegan was a career-best seventh.

Regular-season champion John Hunter Nemechek had a flat tire and ended up five laps down in 22nd. Austin Hill was 23rd, Chandler Smith 28th, Todd Gilliland 29th and Zane Smith 35th to round out the playoff drivers.

The playoff field will be cut to eight after the third race and to four after the sixth for the finale at Phoenix Raceway.

The playoffs will resume Sept. 5 at Darlington Raceway, the historic South Carolina track where Creed won in May.