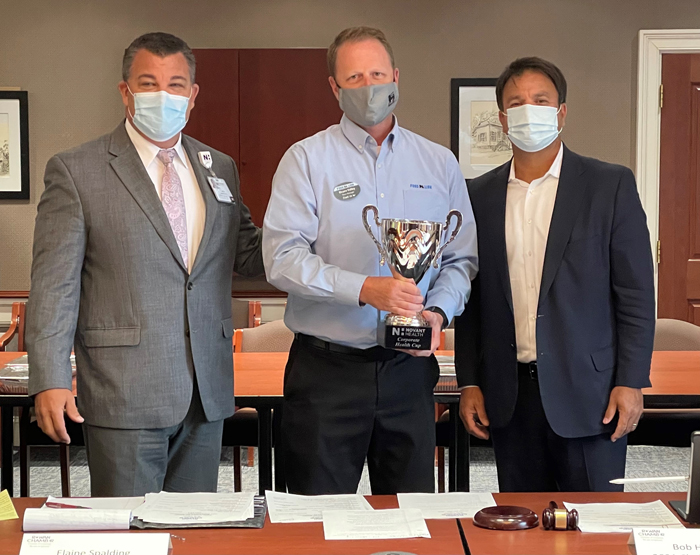 “Food Lion Store No. 10 and Shane Valley went above and beyond to keep their employees safe and provide healthy food options for our community during the COVID-19 crisis,” said Gary Blabon, president of Novant Health Rowan Medical Center.

The award has been presented to businesses for the past six years to encourage businesses to have robust wellness programs. The previous winners of the award are Trinity Oaks, Hitachi Metals, Healthy Rowan, the City of Salisbury and the Rowan County.

NC in the top three states for job gains for July

RALEIGH — North Carolina added 75,600 jobs in the month of July, according to the U.S. Bureau of Statistics State Employment and Unemployment report.

RALEIGH —  Filmmakers producing projects in North Carolina are working toward investing a record amount of money in the state in 2021, according to Gov. Roy Cooper.

The spending amount of $409 million is the largest tally seen in the state since the creation of the  North Carolina Film and Entertainment Grant in 2014. These productions will create more than 25,000 job opportunities for North Carolina’s film professionals and background talent.

“We’ve all worked hard toward this banner year for North Carolina’s film industry,”  Cooper said in a news release. “With our resilient communities and local businesses, and our growing reputation for inclusion and diversity, North Carolina will continue to provide a beautiful stage for film projects of all sizes in every corner of the state.”

With film activity occurring in all eight of the state’s economic development prosperity zones this year’s projects include eight scripted series that present opportunities to return to North Carolina to film additional seasons.

Production has also taken place on several reality series, including “Wicked Tuna: Outer Banks” and “My Big Fat Fabulous Life” as well as on national commercials for Chevrolet, Adidas, Shell, Volvo and others.

CONCORD — Google Fiber will soon be available for residents and small businesses in the Concord area. Concord will be one of the eight cities statewide to have Google Fiber as an internet service provider.

According to recent data from the U.S. Census Bureau, Concord grew 33% over the last decade and is one of the top ten most populous cities in the state.  The city’s growth is supported by the forward-looking vision of the City Council and City leaders who are committed to creating a quality of place where residents can experience high-performance living at its best.

Having access to high-speed internet is necessary to attracting jobs of the future while creating a thriving community with diverse work, online learning and telehealth opportunities.

“Google Fiber in Concord is a game-changer,” said City Manager Lloyd Payne. “I’m excited for the many new opportunities ahead for families and businesses, and the positive ripple effects on our continued growth and economic development.”

Google Fiber has already begun construction and plans to complete the initial phase of the network build by the end of 2022.  Once complete, Google Fiber will offer one gigabit and two gigabit internet service options to residents.

KANNAPOLIS — Five new firefighters have joined the Kannapolis Fire Department to its ranks.

A badge pinning ceremony was conducted at Kannapolis City Hall to recognize the completion of training for the new personnel. During the ceremony, family members pinned the recruits by placing their badges on their uniforms for the first time, signifying the transition from “Recruit” to “Firefighter.”

“I am extremely proud of these new firefighters and thankful to their families and friends who are supportive of their careers,’ said Kannapolis Fire Chief Tracy Winecoff. “Being a firefighter has always been and still remains a service profession, and they are expected to serve the residents of our City to the best of their ability. I am positive these guys will do all they can do to live up to those expectations. We welcome them to our family.”

At the close of the ceremony, they were administered the firefighter’s oath by Kannapolis Jonathan Jenkins, Kannapolis Battalion Chief of Training. The new firefighters have been assigned to positions at the City’s various fire stations.

WASHINGTON —Since the opening of the Paycheck Protection Program (PPP) Direct Borrower Forgiveness Portal on Aug. 4, the U.S. Small Business Administration has received more than 340,000 submissions from borrowers with PPP loans of $150,000 or less.

In providing its new, streamlined portal, the SBA is also executing the Biden-Harris Administration’s goal of centering equity in all programs. With outstanding debt saddling millions of disadvantaged and underserved small businesses, increasing the rate of forgiveness to PPP borrowers will have an immediate effect in helping the smallest of small businesses recover from the pandemic and access other resources.

Prior to this option, businesses that did not apply for forgiveness within 10 months of the end of the covered period were at risk of owing principal and interest payments on their PPP loans.

“We are incredibly excited that in just two weeks, the Direct Borrower Forgiveness Portal is providing small businesses with a streamlined, user-friendly way to apply for forgiveness and receive relief on these essential PPP loans,” said Patrick Kelley, associate administrator for SBA’s Office of Capital Access. “Already, we’ve seen hundreds of thousands of borrowers navigating quickly and easily through the process, and we continue to proactively help borrowers apply through extensive outreach and webinar trainings. We encourage all lenders to opt-in to this tested portal.”

In the two weeks since the portal opened, the SBA has received over three times the number of submissions than the top 10 PPP lenders who are not participating in Direct Forgiveness, putting us on pace to close out forgiveness for the 3.4 million direct forgiveness borrowers by the end of the year. Currently, more than 1,230 PPP lenders, representing over 50% of outstanding loan forgiveness applications, have opted-in to the Direct Borrower Forgiveness Portal.

“The direct forgiveness platform has been very effective and efficient in processing applications from tens of thousands of our PPP borrowers already. This has been tremendously smooth for our borrowers, our institution, and for SBA,” said Chris Hurn, CEO of Fountainhead.  “Our borrowers’ feedback has been universally positive about its ease of use in completing their applications within mere minutes. We’re very proud to have played a small part in helping make this a reality.”

Before direct forgiveness, borrowers had to take the initiative to download forgiveness forms or get forms from their banks to complete and submit. Some lenders had not yet built the technology or processes to even begin accepting forgiveness applications, and many did not actively reach out to borrowers to help them through the process. Forgiveness was not user-friendly, which is why millions of borrowers, including over 700,000 loans made in 2020, had yet to submit their one-page application.

The SBA also encourages interested borrowers to attend an upcoming live webinar and Q&A sessions on Aug. 19 and 26 and Sept. 2 at 2:30 p.m.