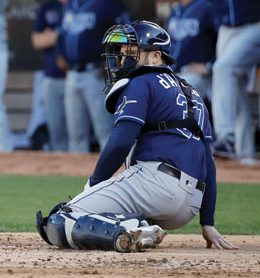 Max Fried (11-7) allowed four hits in his first career nine-inning complete game, and the NL East-leading Braves matched a modern-era, single-season franchise record with their 11th consecutive road win. The last time that happened was in 1956, when the team was based in Milwaukee.

Baltimore’s losing streak is its second-longest since moving from St. Louis in 1954, topped only by the 1988 team that started the season 0-21. The Orioles have been outscored 141-42 during their current skid, which has left Baltimore with the worst record in the majors (38-83).

Hours before the game, d’Arnaud signed a two-year, $16 million extension with a club option for 2024. The 32-year-old catcher immediately rewarded Atlanta for its show of faith, crushing a second-inning pitch from Keegan Akin (0-8) for a 2-0 lead.

It was his second homer in five games since coming off a 2 1/2-month stay on the injured list with a sprained left thumb. He also had an infield hit and drew a walk.

Fried struck out four, walked none and permitted only one runner past first base. His previous longest outing was seven innings, accomplished six times, and his lone complete game was a six-inning stint against Cincinnati in 2019.

Trey Mancini had two hits for Baltimore and Ryan Mountcastle extended his career-high hitting streak to 12 games with a first-inning single.

D’Arnaud was looking to stay in Atlanta, and the Braves were eager to make it happen.

“I’m very thankful they reached out to me. I wanted to come back,” d’Arnaud said.

“Travis has fit right in here and has been a huge part of our success,” manager Brian Snitker said.

Now in his third season as Orioles GM, Mike Elias said before the game that the rebuilding process is on course despite the team’s miserable record. “We knew this was going to be tough and take a while (but) we’re very much on track with what we’re trying to do,” Elias said. “I hoped that we would be able to avoid the kind of stretches of play that we’re in right now, but I’d be lying if I said I didn’t know it was a possibility.”

The Orioles claimed RHP Chris Ellis off waivers from Tampa Bay and designated struggling RHP César Valdez for assignment. Valdez notched eight saves by May 10 before faltering. He allowed at least one run in five of seven appearances in August.

Orioles: OF Anthony Santander was given the night off to rest a sore left ankle that’s been an issue for much of the season and was particularly bothersome on the turf in Tampa Bay earlier this week. “Hopefully he’s back in there tomorrow,” manager Brandon Hyde said. … LHP Bruce Zimmermann (ankle) may not pitch again in 2021. “It’s going to be close,” Elias said. Zimmermann went on the DL in mid-June with a biceps injury and subsequently sprained his ankle while working out.