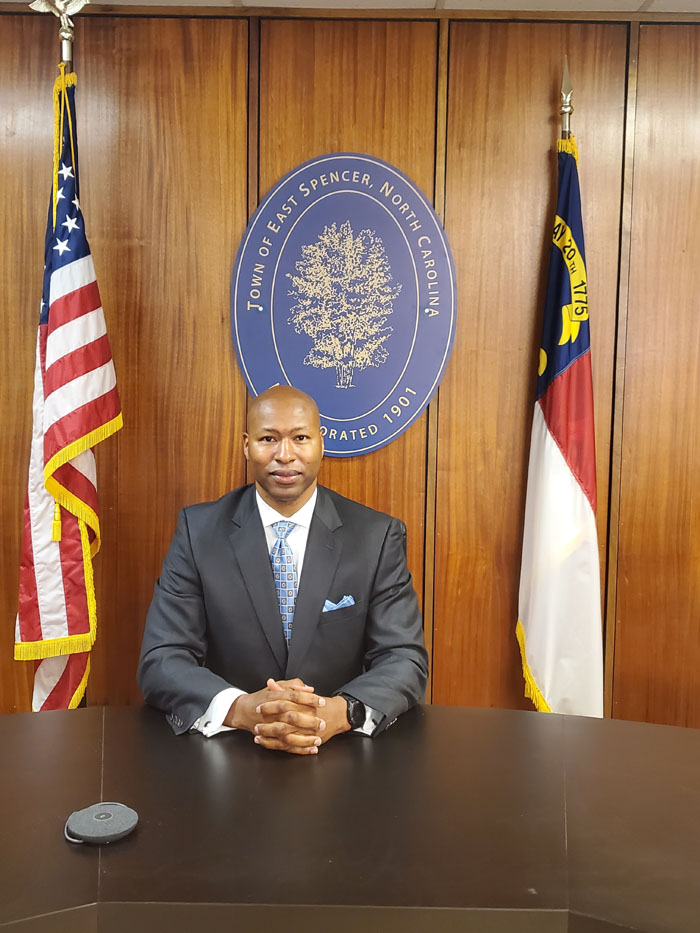 EAST SPENCER — After several years of high turnover for the administrator position in East Spencer, the town sees stability in Michael Douglas, who’s drawing on his more than 20 years in the military to move the town forward.

Douglas was hired to lead the town as administrator in June after Phil Conrad, director of the Cabarrus-Rowan Metropolitan Planning Organization, served in an informal interim role to assist the town in the selection process. James Bennett left the role in February after being hired in October 2019. Before Bennett, Conrad assumed the position in April 2019 from F.E. Isenhour, who had served since 2016. Preceding Isenhour was David Jaynes as well as Macon Sammons Jr., who stepped down in 2015.

Douglas is a California native and has degrees from Grambling State University in Louisiana as well as the American Military University. He began his Army career in 1995 and retired in 2013 at Fort Bragg. Douglas then taught for two years in Cumberland County before serving as town administrator in the town of Green Level and town manager in Kenly.

Douglas said he enjoys leading in local government because like the military, it’s all about managing people and systems.

“I enjoy local government, and I tell everybody it’s just like the military. Instead of having soldiers, you now have residents you got to take care of,” Douglas said. “So that’s why I enjoy it so much because it’s that selfless service that was given to me from the military for 20 years, and now you just bring it to local government.”

Douglas sees a bright future for the town, but a revamp of the infrastructure is the top priority at this time. He estimates it will take up to $20 million to update the old infrastructure, so projects at this time must be strategic and incremental, he said.

“Our infrastructure, for lack of a better word, is just weak,” Douglas said. “Residents are complaining about the high utility rate, and I understand that 100%.”

Douglas has already initiated a contract with Yates Grading & Paving in Lexington to fill potholes across the town for a cost around $2,500. The town will also pave Broad, Cedar and Gardner streets for a cost around $29,000. He then plans to begin a contract to chip and seal the town’s roads. Funds for both projects come from annual Powell Bill revenues.

The town has also received two separate grants from the U.S. Housing and Urban Development’s Community Block Development Grant program. One totaling $750,000 will allow the town to revitalize 10 homes, while the $1.9 million grant will be dedicated to infrastructure projects. Additionally, the town is expected to receive $487,000 total from the federal American Rescue Plan, with half of that to be used for the purchase of three police vehicles, two public works vehicles and around 425 upgraded electric meters.

As more development moves along on Interstate 85, Douglas said the town is anticipating growth and annexation from its extraterritorial jurisdiction.

“The potential for East Spencer is enormous,” Douglas said. “We have water and sewer lines stretching out toward I-85. Well, that’s where all the growth is going to take place … Looking at it from my ‘8 by 10,’ I got to keep going out that way.”

Douglas said he can tell how close-knit of a community East Spencer is given how nice the residents have been to him. He added that a few times he’s walked to a nearby store from Town Hall, local residents have asked if he needed a ride, which isn’t something one sees in Charlotte or Raleigh, he said.

Mayor Barbara Mallett said having Douglas to lead the town has been a relief for her and town aldermen, especially because so much detail work is needed when applying for grants, for example.

“It’s great for me because when you’re a mayor and have to do those day-to-day operations, it can be tedious,” she said. “It has been a relief for me and the other board members, too. And it also gives us some stability to having someone here to pick up the heavy load of municipal governing and decision making.”