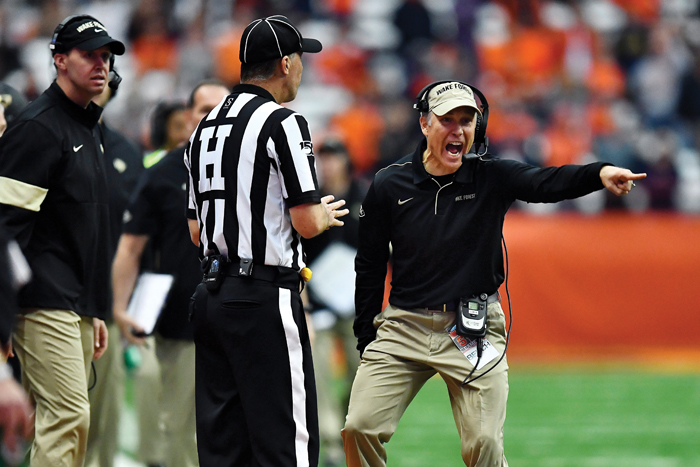 Wake Forest has veterans back playing under an established coach who has guided the Demon Deacons to the first run of five straight bowl games in program history. The challenge is to keep taking new steps despite the challenges in their own Atlantic Coast Conference division.

“Whether it’s New Year’s Day bowls or being in contention to win the ACC Atlantic (Division), obviously that’s a very high standard in the ACC,” eighth-year coach Dave Clawson said. “But that has to be our goal.”

The good news for Wake Forest is the Demon Deacons have plenty to work with on both sides of the ball. Nine starters are back on offense and defense, including quarterback Sam Hartman, top rusher Christian Beal-Smith and top receiver Jaquarii Roberson.

The Demon Deacons (4-5, 3-4 ACC last year) were headed toward a winning record before stumbling late in a season altered by the COVID-19 pandemic. After blowing a 21-point third-quarter lead in a loss at North Carolina, they entered a pause of team activities that prompted a shuffle of the schedule. Wake Forest returned with a loss at Louisville and then to Wisconsin in the Duke’s Mayo Bowl to end the year, ending with three fewer regular-season games than the maximum allowed.

“The fourth quarter we were just trying to finish,” Clawson said. “I think we take pride that we did finish. We didn’t finish the way we wanted to competitively.”

Clawson figures there’s already at least one boost in that the team has had its full offseason schedule of strength and conditioning, a critical piece for a program that leans on developing players instead of securing the highest-ranked recruits to compete like six-time reigning ACC champion Clemson within the division.

The Demon Deacons open at home against Old Dominion on Sept. 3.

Cutcliffe hopes changes pull Duke out of struggles from 2020

David Cutcliffe never managed to keep Duke’s season from spinning into turnover-filled disarray. He’s not shrugging it off as one bad run, either.

The 14th-year coach is coming off his worst season in Durham. That led him to shuffle coaching responsibilities – including taking play-calling duties off his plate — as part of an offseason overhaul that will include a new starting quarterback.

“I wished I would have put them in a better position to be successful,” Cutcliffe said. “but I think that all that we went through will be a part of who we are the rest of our lives. So I’m not going to blow that season off as a loss. I think we learned a great deal.”

The Blue Devils (2-9, 1-9 Atlantic Coast Conference) had gone to six bowls in seven seasons from 2012-18 before finishing 5-7 in 2019. Last year’s stumble was a big one, with the Blue Devils finishing with a national-worst 39 turnovers – at least 14 more than any other team in the Bowl Subdivision ranks.

Clemson graduate transfer Chase Brice accounted for a national-high 15 interceptions and multiple fumbles. He has transferred to Appalachian State, opening the door for fourth-year graduate Gunnar Holmberg to start.

That’s part of significant turnover throughout the lineup, with Duke returning five starters on both offense and defense.

The Blue Devils open at Charlotte on Sept. 3.

North Carolina State didn’t let its first major stumble under Dave Doeren linger. That has the Wolfpack back to the position that came through years of steady program building.

N.C. State has eight offensive starters and 10 defensive starters back, including quarterback Devin Leary from a broken leg and linebacker Payton Wilson after he led the Atlantic Coast Conference in tackles. That group helped the Wolfpack (8-4, 7-3 ACC) move past a four-win season and back to a bowl game for the sixth time in seven years.

“This isn’t last year’s team, obviously every year is new,” said Doeren, who is entering his ninth year. “But you can learn from things that happened. We won five one-possession games, we lost two. So in those one-possession games, there’s details, little things, that you can hold them accountable for out here because they add up. It’s a hungry team, and it’s competitive.”

The 2019 struggles had come after consecutive nine-win seasons built through developing young players into experienced contributors by the time they were needed for leading roles. Last year’s team capitalized off the experience from failure, too, to turn things around and set up this year’s Wolfpack for success.

Leary showed he had made a big step forward before going down to the October injury, including directing a last-minute touchdown drive to win at Pittsburgh. The Wilson-led defense was better down the stretch, allowing 20.2 points and 335 yards in the last five games after allowing 35.6 points and 472.1 yards through the first seven.

Now N.C. State is returning its top three rushers and top three pass-catchers, while the top 11 tacklers return on defense.

“There’s not so much you trying to figure out what’s going on from the guys,” linebacker Isaiah Moore said. “Everybody is kind of on the same page already, so it’s a good feeling.”

The expectations have risen rapidly at North Carolina, with the Tar Heels going from a team needing confidence just to win a few games to having a Heisman Trophy candidate and a high national ranking.

Mack Brown knows this season’s success will depend on how his team handles that change.

“We’ve gotten hype,” the coach said. “We’ve been hugged. We’ve had sugar thrown all over us.”

Brown is back for the third season of his second stint leading the Tar Heels. And this year, the Tar Heels are starting at No. 10 in The Associated Press preseason Top 25 poll. That’s their highest preseason ranking since 1997, Mack Brown’s last year of his first stint with the Tar Heels. North Carolina is picked to win the Atlantic Coast Conference’s topsy-turvy Coastal Division race.

It’s a testament to the recruiting Brown’s staff has done, along with the presence of quarterback Sam Howell, that the Tar Heels (8-4, 7-3 ACC last season) are in this position despite losing two 1,000-yard rushers and a 1,000-yard receiver to the NFL draft.

The high-scoring 2020 team got a taste,  rising to No. 5 in the AP poll  before suffering an upset loss at Florida State.

“We weren’t ready to be a top-ranked team at that time,” Brown said. “What we’ve told them is quit talking about it and do it. That’s your work every day.”

Howell, a junior, has been a perfect fit in Phil Longo’s scheme. The preseason ACC player of the year pushes the ball downfield to rank as one of the national leaders in passing yardage and touchdowns, with his 68 TDs in two seasons tied for the most in program history. Yet he also avoids major mistakes, throwing just 14 interceptions in 770 attempts (1.8%), and has proven he can dig the Tar Heels out of big deficits.

Brown has already indicated that this will likely be the quarterback’s final season before pursuing an NFL career as a projected high pick.

“I think we have a really mature team and I don’t think anyone’s really let the hype get to us,” Howell said. “Everyone knows the hype we have surrounding our program and I think it’s well deserved. But also the hype isn’t going to win football games.”

The Tar Heels had possibly the nation’s best 1-2 running punch last year with Javonte Williams and Michael Carter. Tennessee graduate transfer Ty Chandler will get the first shot at filling those vacancies this year. He ran for 2,015 yards in 45 games with the Volunteers, and ranks fifth in Tennessee history with 3,245 all-purpose yards.

The Tar Heels open with a tough Coastal Division matchup at Virginia Tech on Sept. 3