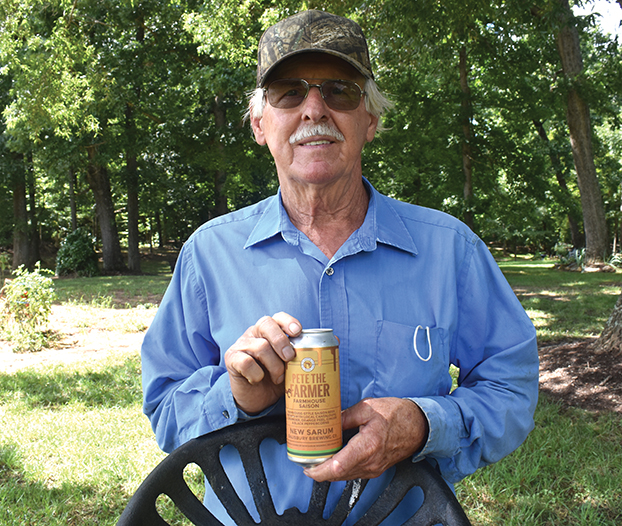 Jerry "Pete" Poole holds up a can of the New Sarum beer made with his cantaloupes and named in his honor. The farmer has been growing and giving away the flavorful melons for decades. Ben Stansell/Salisbury Post

SALISBURY — While working at Carolina Rubber Hose in the late 1960s, Jerry “Pete” Poole never had to worry about going hungry in the summertime.

Whenever Poole showed up for his second shift, supervisor Ben Harrison would have a truck bed full of homegrown watermelons and cantaloupes waiting. Those melons, Poole said, were always delicious — so delicious they made him want to grow his own.

“I was always hoping I could raise some as good as his because he never had a bad one,” Poole said.

After dabbling with different varieties and growing methods, Poole eventually achieved his goal and grew a cantaloupe just as tasty.

“We used to go out and buy a cantaloupe and it would just not taste the same,” said Julie Poole Harvell, his daughter. “Dad always grew the best-tasting cantaloupes. When people knew he had cantaloupes, they would want some as well.”

Poole, who has gone by the nickname “Pete” for as long as he can remember, was always more than happy to share. Over the years, he’s gifted cantaloupes to relatives, neighbors, coworkers and to the people at New Sarum Brewing Company. This year, the brewmasters decided to turn 25 of Poole’s cantaloupes into beer. The new brew, which will have a limited, can-only release in the taproom on Friday, is named “Pete the Farmer” in his honor.

“Pete is dedicated to his craft just like we are,” said Andy Maben, New Sarum co-owner and brewmaster. “He’s not doing it for praise. He’s doing it because he loves it just like we do. We just want to showcase the farm-to-beer mentality too.”

Poole is the last person who might expect to have a beer named after him. Harvell describes her 76-year-old father as “reserved” and “shy,” to the point where people who don’t know him well might even think he’s aloof or angry. But once you get to know Poole, she said, he opens up.

“He’ll talk your ear off if he knows you,” Harvell said.

The staff at New Sarum got to know Poole well early on in the brewery’s existence, when it was still an experimental operation located in a small office space near The Salty Caper on Lee Street. Needing a place to put their spent grain generated during the beer-making process, New Sarum found a happy partner in Poole.

“The leftover grain is really high in protein and it’s very good for cattle and farm animals,” Maben said. “For us, it’s a byproduct that we don’t want to go to waste. For him, it’s really beneficial for his cattle. It’s kind of a win-win.”

Poole picks up the grain on an almost weekly basis and takes it back to his farm in eastern Rowan County to feed his herd of beef cows. In addition to the cows and cantaloupes, Poole raises chickens, goats, and donkeys and grows blueberries, blackberries, cucumbers and multiple varieties of tomatoes. Poole has been farming the land full-time since he retired after more than two decades with Granges (formerly Norandal) in 2010.

Most of the produce Poole grows he gives away.

“I don’t really care about peddling them like that,” Poole said.

It’s become a tradition for Poole to drop off cantaloupes at New Sarum Brewing when the melons ripen in July and August.

This summer, the brewers at New Sarum decided to do more than just eat the juicy fruit. The resulting concoction is a farmhouse-style saison, which blends about 15 gallons of Poole’s pureed cantaloupes with coriander, orange peel, ginger and black peppercorns. It’s a marriage of two different saison styles, Maben said, and gets its special flavor from the melons. 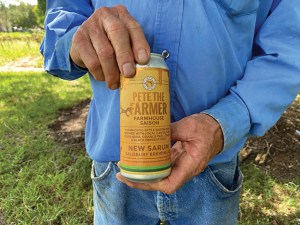 The beer made using cantaloupes grown by Jerry “Pete” Poole is a farmhouse saison, made with coriander, orange peel, ginger and black peppercorns. The can itself is designed to look like a ripe melon. Ben Stansell/Salisbury Post

The cantaloupes Poole grows are a Burpee hybrid variety, which Poole said are more flavorful than the more common Athena variety, but have a shorter shelf life. Poole knew that his melons were going to be used to make beer, but he wasn’t aware that the beer would be named in his honor until the folks at New Sarum showed him the label a couple weeks ago. When he saw his name on the beer, the shy farmer couldn’t help but crack a smile.

“It really surprised me that they would do something like that because I had no idea in the world they were going to,” Poole said. “It sure is a privilege and an honor for them to do that for me.”

The honor is particularly meaningful to Poole as he’s still mourning the loss of his wife, Rose, who passed away earlier this year. The couple was married 54 years.

“It really overjoyed him,” Harvell said. “It has really helped.”

Maben gave Poole a case of the beer to take home to try for himself. Although he’s no craft beer connoisseur, Poole said he’s a fan of the brew. It’s his favorite of the brewery’s offerings, but he might be a little biased.

Poole has handed out cans of the beer to his relatives and friends as a discreet way to tell them the news. He brought some over to Harvell, but didn’t tell her why he wanted her to try the beer and dropped it off in a plastic bag. It wasn’t until Poole called back later and told her to check the label that Harvell realized its significance.

Poole plans on visiting the New Sarum on Friday for the release of the special brew. Like always, he’s looking forward to sharing the fruits of his labor.