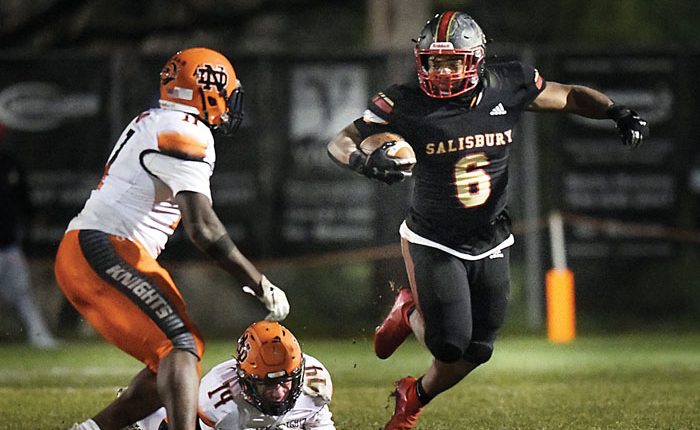 Salisbury's JyMikaah Wells is back with a Hornets team that went 9-2 and won a state championship. File photo by Wayne Hinshaw, for the Salisbury Post

SALISBURY — A new season begins Friday, with the local schools in vastly redesigned leagues and with everyone fired up and optimistic.

They’ll collide right away on Friday  in Mount Ulla, with West looking to do a lot better than it did in last season’s 36-0 drubbing by the Hornets on opening night. The Falcons were short-handed last season. This time it’s all hands on deck.

North Rowan at East Rowan might be just as interesting and could be closer. East has to be favored at home, but if North can get the ball to its receivers, good things can happen for the Cavaliers.

South opens at home under new head coach Chris Walsh against a lightly regarded Parkland squad, but Parkland is still a 4A opponent.

Carson opens at home against Statesville, always fast and always athletic. Some people may have forgotten that Carson made six turnovers at Statesville last season and still had a reasonable chance to win in the fourth quarter.

A.L. Brown is in  Charlotte-less 4A league, but opens on the road against a Charlotte-Mecklenburg school (North Meck).

Davie has back Tate Carney, a Wake Forest commit who should be one of the state’s best. The War Eagles, an offensive machine in the spring — 35 or more points in six of their seven games — will be expected to win at home against a Mooresville club that is trying to bounce back from a 2-5 record in head coach Joe Nixon’s first season.

Game times are a bit staggered this season. Most are at 7 p.m. Friday, but North-East and Mooresville-Davie will kick off at 7:30 p.m.

Vance Honeycutt and Zae Clay are gone, but Jalon Walker and JyMikaah Wells are back from a 9-2 team that won a state championship.

West, which went 4-4 in the COVID season under new coach Louis Kraft, leads the series 21-15.

A good trivia question is who was East’s coach the last time the Mustangs beat North. The answer is Chad Tedder. That win on opening night of the 2010 season was one of only two wins that season by the Mustangs.

North has won the last seven meetings and has dominated the all-time series to the tune of 42-16-1.

South won four close ones from 1985-88, but Parkland’s Mustangs won the last four.

South, 2-5 in the COVID season, is moving up to 3A.  Walsh said the offensive line is his team’s strong point.

Parkland was 0-6 in the COVID season. It was mostly routs, but Parkland took on some top-notch teams.

It’s been a struggle historically for Carson against Statesville.

The Greyhounds, 6-2 in the COVID season,  lead the series 10-1 and have won the last seven meetings.

Carson’s only victory came in 2009, a year when Carson was good and Statesville was not.

Carson battled hard in a 43-31 loss to the Hounds last season when the schools were conference foes.

Coach Daniel Crosby likes his linebackers and offensive line, and a lot of people think the Cougars, coming off a 3-4 season, will be pretty good.

The Wonders were in the same league as North Meck from 2013-16 and beat them all four times.

North Meck is coming off a 1-6 season, so the Wonders should keep that string going.

The Wonders were 6-2 in the COVID season. They won a conference championship, but a first-round playoff loss made it  less than satisfying season.

The strength for A.L. Brown is the linebackers, led by N.C. State commit Torren Wright.

Davie is coming off a wild and woolly 6-2 season, in which the War Eagles routinely scored five or six touchdowns.

Davie didn’t play Mooresville last season, but beat the Blue Devils 31-30 on a 2-point conversion in overtime in 2019.