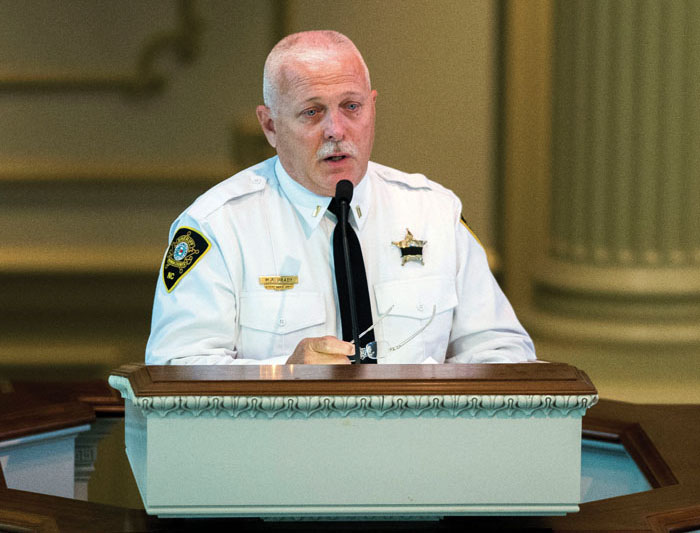 SALISBURY — The year was 1990 and a slick-sleeved patrol deputy named John Sifford was transporting a man to an address in the small Davie County town of Cooleemee when he heard a call on the radio.

A curious Mike Brady, then a law enforcement officer in Cooleemee, asked Sifford to pull over into a parking lot off of N.C. 801.

Sifford wasn’t in trouble. Brady just wanted to know how he could help — something he became known for in his life.

“He was somebody that anybody who knew him or worked close with him could depend on,” Sifford said.

Loved by many and known by many more, Brady died Friday at the age of 59. He was killed in a single-vehicle motorcycle crash in Indiana while on his way back home from Sturgis, South Dakota. He was best known in Rowan County for more than 27 years with the Rowan County Sheriff’s Office and charitable efforts that included Powles Staton Funeral Home’s Operation Toy Soldier.

Brady came to work to for the Rowan County Sheriff’s Office in 1994 and quickly found himself working with the same deputy he’d pulled over years earlier. Sifford was Brady’s sergeant when the two worked in the patrol division. Sifford and Brady also worked together in the drug unit, where the former Davie County law enforcement officer met Chad Moose, who’s now a major supervising criminal investigations.

“He was one of those people that you trust,” Moose said. “We went through a lot of doors together. You know he is going to have your back. … If you’re in a bad situation, he’s the one you want there with you. He was fearless and a good friend.”

Moose said Brady set a standard for being aggressive in investigations rather than waiting for tips to come to the department.

But Brady served the community in more ways than solving crimes. He was instrumental in sorting out the logistics for moving Powles Staton’s Operation Toy Soldier to Walmart. The national program collects toys for the children of deployed and non-deployed military members, and local donations boomed after the move to Walmart. This year’s efforts will be dedicated to Lynn Burris and Brady because of the law enforcement officer’s charitable work.

“Especially here in Salisbury, he did more behind the scenes than anybody really truly knew,” said Arbe Arbelaez, who frequently worked with Brady during Operation Toy Soldier. “It’s heartbreaking that we lost such a wonderful man. He was always laughing, always kidding. He always had a smile on his face.

“And he always had his phone on him. In that sense, he walked the walk. When he said call me if you need me, he would definitely be there.”

When Sifford, now a major in the Sheriff’s Office, had open heart surgery, Brady was the first person that called, asking if there was anything he could do to help.

There was, Sifford responded. He dropped a lawnmower off for repairs before surgery and needed someone to pick it up.

“He gave as much as people gave him and more,” Arbelaez said. “Everybody was always glad to see or hear from Mike, and he knew a lot of people.”

Brady also helped with charitable efforts such as Relay for Life and the Law Enforcement Torch Run for the Special Olympics.

Russ Roakes of Powles Staton Funeral Home said Brady’s death leaves shoes that will be impossible to fill for Operation Toy Soldier. The same is true for the community at large, said Rick Fesperman, who retired as assistant chief of the Salisbury Fire Department.

Fesperman came to know Brady when the law enforcement officer’s dad was Salisbury fire chief. That meant a young Brady running around the department.

“I think the community just got to fall in love with him,” he said. “I still can’t believe he’s gone. It’s such as shock to the whole community.”

Brady was a certified diver for the Rowan County Rescue Squad in addition to being a diving instructor. He was a Boston Red Sox fan, known to wear the McGruff the Crime Dog costume in the Faith Fourth parade, liked motorcycles and, with Moose, once took Bill Kenerly, the former district attorney, skydiving.