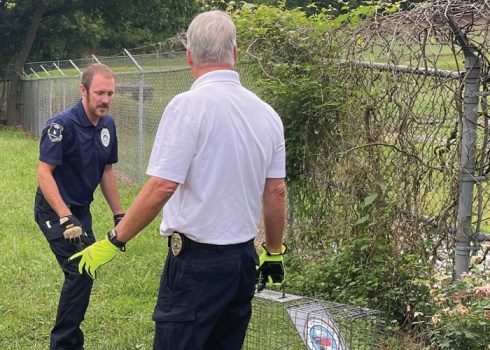 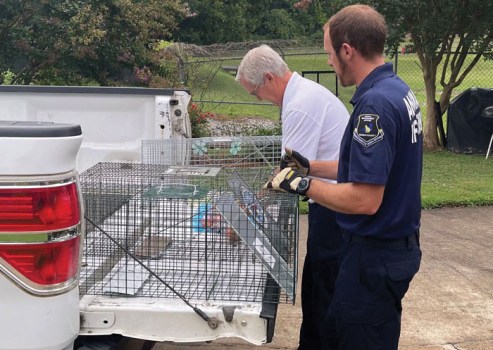 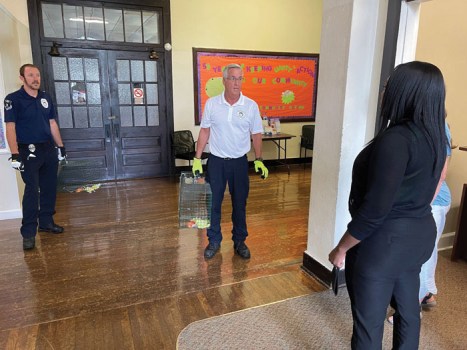 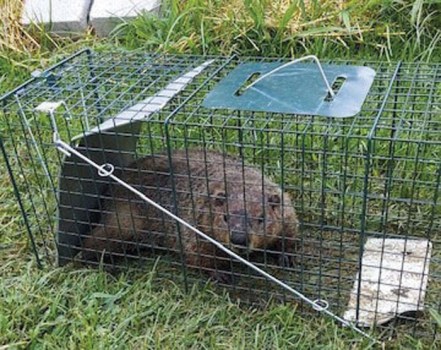 Officers from the Rowan County Animal Services Division visited areas near Bank, Vanderford and Institute streets earlier this month to trap groundhogs local residents say have been a nuisance for several years now. Some residents have reported seeing groundhogs that weigh more than 30 pounds. Submitted photo

When Hardin was a member of the Salisbury City Council in 2016, he turned to county government for help with rodents that residents said were eating away at property and gardens. At the time, he said neighbors complained at Salisbury Neighborhood Action Group meetings for more than two years before any action on the issue was taken. There were reports of rats, snakes, groundhogs and raccoons.

Clai Martin, animal enforcement manager with Rowan County, said the department has received calls from residents about the rodent problem in the West End and got involved due to the proximity of a child care center. Hardin told the Post he contacted Rowan County Commissioner Craig Pierce about the issue during that week, and animal control officers with the county met him near the head start on West Bank Street the following morning to set traps. Animal Enforcement Officer Logan Horne is the officer who is assigned to answer any animal-related calls in the city limits, and he joined Martin earlier this month to set traps with Hardin.

Traps were set at the fence line of the city-owned water overflow basin near Bank and Vanderford streets and near Salisbury-Rowan Community Action Agency, in addition to some backyards of homes near Bank and Institute streets.

Hardin said complaints also included frustration from residents who feel the city is not responding to an issue that’s been occurring for several years now.

“No one should have to live in fear,” Hardin said. “If you can build a $13 million park, then you can go two miles west and you can help people out for livability. People are so apathetic with the lack of action by the city. They’ve pretty much given up.”

Pamela Jones, who lives on the 600 block of Milford Hills Road, said she frequently witnesses raccoons climbing in and out of a house near her home that’s been abandoned for more than a decade.

Jones said her mother, who lives on the 1000 block of West Horah Street, is accustomed to seeing a groundhog in excess of 30 pounds near her home. Jones said she witnessed the rodent travel from the historic Monroe Street School, across Lloyd Street and into her mother’s yard before nestling inside next door at an abandoned house located at 1027 West Horah St. Just a few months ago, Jones said her mother heard the rodents rustling around in her yard and in her trash cans.

Jones said restoring or demolishing abandoned homes in that area would do a lot to mitigate the influx of rodents, but she said a slow response time usually follows when contacting the city for various issues.

Salisbury Code Services Manager Michael Cotilla said his department is not aware of the ongoing issue with groundhogs and raccoons in abandoned homes in the West End. However, two of the 18 of demolitions the city approved in the 2020-21 fiscal year were near the site of Livingstone Headstart — 420 Partee St. and 411 Grim St.

For the current fiscal year, nine properties located in the West End are not up to code and at risk of being demolished, including 1027 West Horah St. next to Jones’ mother. Properties at 1024 Locke St. and 713 Grace St. have already been demolished by the owners.

Hardin said the frustration has led to reports of residents trying to kill the rodents by running them over with their vehicles, stabbing them and burning them. For those reasons, he also contacted People for the Ethical Treatment of Animals, or PETA, but has not yet received a response.

Rupert Medford, a North Carolina Wildlife Commission biologist who oversees Rowan County’s region, said the commission can issue a depredation permit that allows for trapping in cases where animals are damaging property. Once trapped, the animals cannot be relocated. It must be euthanized or released at the site of capture.

“Many folks love seeing wildlife. Others, however, do not,” Medford said. “One situation that we are sympathetic to is when there is property damage, and in North Carolina, residents have a right to protect their property whether it is a groundhog digging up under a house along the foundation or a raccoon damaging a garden or outbuilding.”

Mayor Karen Alexander and City Manager Lane Bailey told the Post they were made aware of the current issue after an email from the Post last week requesting comment. Alexander told the Post Wednesday that she sees opossums, owls and raccoons when walking in the West Square, but she hasn’t been afraid because they haven’t been aggressive to her.

Alexander and Bailey recommend residents who are dealing with the issue contact Rowan County Animal Control or the N.C. Wildlife Commission at 866-318-2401. While she understands the frustration from residents who feel they’re not getting a satisfactory response, it all boils down to the city’s lack of funds and resources to resolve the issue, she said.

In 2009, the city and county signed a formal agreement for the county to take over animal control services.

“So, unfortunately, our role then becomes to refer our city citizens to the resources that are paid for through the appropriation at the state level,” Alexander said. “We have to direct them to where the resources are.

Though Hardin said he is disappointed in the city’s lack of response, it won’t stop him from bringing awareness to this issue until it is resolved for good.

“People are getting tired of hearing ‘We don’t have the money’ with all these new projects around,” Hardin said. “I just want the issue resolved.”