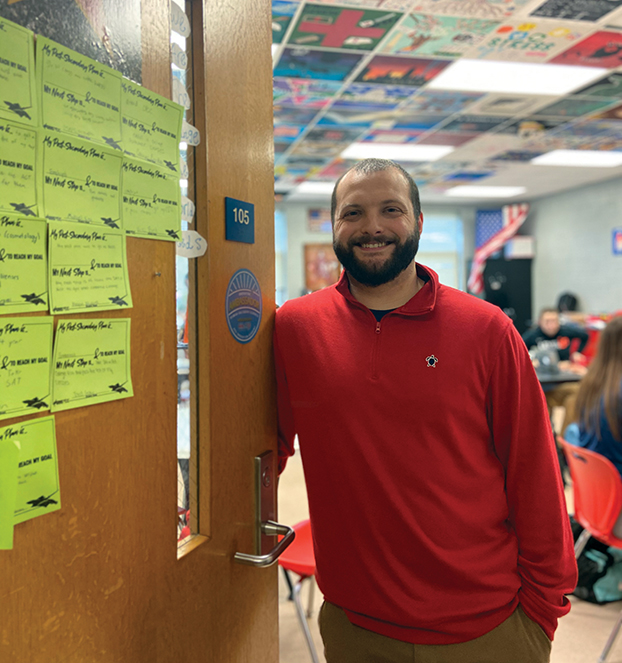 CHINA GROVE — During nearly a decade of teaching at South Rowan High School, Josh Mullis has heard a common refrain from some of his students: “I’m not coming back to China Grove.”

As someone who grew up in the town and returned after graduating from Pfeiffer University, Mullis, 30, has always been concerned by his students saying they’re planning on moving away.

Making sure China Grove is a town people want to come back to is one of the key reasons why Mullis is running for one of three seats on the China Grove Town Council in November. The seats are currently held by Brandon Linn, Arthur Heggins and Don Bringle, all of whom are seeking reelection.

“I see a really big opportunity for China Grove to grow, not to expand into a big city, but an opportunity to grow for my kids and other kids in this community so that they want to come live here and move here and be a part of the town,” Mullis said.

The history teacher at South Rowan also coached football before giving it up to spend more time with his two young daughters and newborn son. It was actually his daughters who inspired Mullis to get involved with town politics in the first place.

“I drove my daughters over the Village Park, to walk downtown Kannapolis and to go over there to play on the playground because we didn’t have anything like that here,” Mullis said. “We do go behind the community building and play in the little park there and my daughters love it, but I’d like to have more for them growing up.”

Mullis, a Carson High School graduate, joined the China Grove Parks and Recreation Board shortly before the pandemic began. While Mullis said he’s enjoyed having “innovative conversations” through his participation on the board, he believes that serving on the town council would give him the ability to make a larger impact on China Grove.

In addition to lobbying for more outdoor spaces for families to spend time, Mullis said generating economic development downtown would be among his top priorities.

“That’s really what small towns are about, is giving that small business owner a chance to have a store and then build a community around them to support them,” Mullis said.

To spur small business growth downtown and particularly in empty storefronts, Mullis said he would explore offering tax incentives and would like to personally recruit entrepreneurs.

“We need a council that’s going to praise, support and seek out entrepreneurs who want that opportunity and chance,” Mullis said.

In addition to bringing new businesses downtown, Mullis said he would support development along the I-85 corridor and elsewhere in the town’s limits. That includes new housing developments.

“People are looking for opportunities to live in a small town and make an easy commute to work,” Mullis said. “I think China Grove has a very, very big opportunity, and we’re not looking at thousands of housing developments, but we have an opportunity to expand places for people to live in China Grove. I think that’s phenomenal.”

Several proposed housing developments have faced opposition from the town’s council due to the proposed lot sizes being too small. However, the council did approve plans for two new developments last week. Mullis said he believes that “housing developments look a little bit different than they did 50 years ago” and understands that people want to live closer together.

Even though Mullis said he welcomes and would support population growth in the town, he also wants China Grove to maintain its small town feel.

“I love that about China Grove and I love that it’s our little slice,” Mullis said.

As for his other priorities, Mullis said he’d like to improve the community’s involvement in town politics and hear what the citizens of China Grove want to see from the town council.

Mullis plans on reaching “disengaged” voters through social media during his campaign, but would also like to take a more personal door-to-door approach to talk to voters about their wishes for the town. Input from the people of China Grove, he said, would largely influence his moves as a council member.

“I’m the type of person where I want to hear what the community wants,” Mullis said. “I don’t want to necessarily come in here and say I want to do this, this and this, I want to listen.”