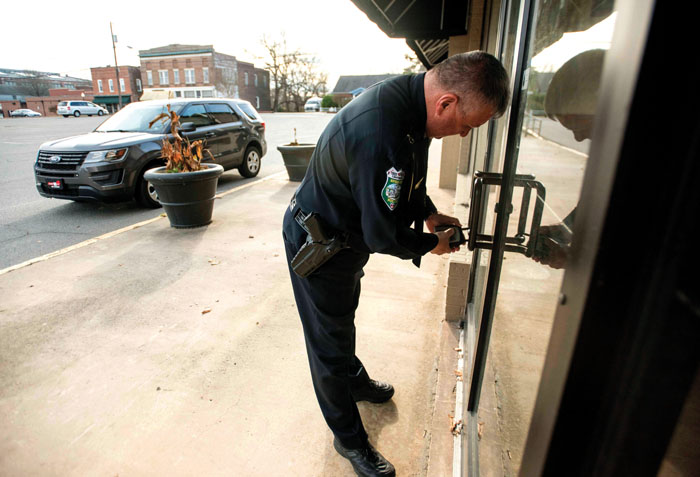 SPENCER — Mike James, Chief of Police in Spencer, has thrown his hat into the race to serve as sheriff in Davidson County.

James, a Republican, has been at the helm in Spencer for 11 years and said he felt called to run for elected office. His bid for sheriff will be on the 2022 ballot. James first came to Spencer after retiring as a major with N.C. State Highway Patrol. So, running for public office is an entirely new experience for James.

James said he wants to fill the vacancies within the office and improve the turnaround speed on processing concealed carry weapon permits, which fall under the purview of county sheriff offices.

“I like helping people and improving processes,” James said.

He also recently oversaw the creation of a citizen advisory board in Spencer, which has begun working on outreach, presentations for local young people and equity in the recruitment process.

James said he would be interested in bringing programs like the advisory board to the county level and host community forums for each quadrant of the county so citizens could tell the office what they need.

James said he oversaw 1,800 troopers in his Highway Patrol career and nine months into his retirement, he was “bored to tears.”

He thought going from overseeing troopers to a small agency in a town the size of Spencer would be a good change of pace. He has come to appreciate the amount of hands-on work that goes into working in a small town.

Where his role with Highway Patrol was largely based on delegating, in Spencer he goes out on calls if no other officer is available or even do things like mop the floor. The benefit, he said, is getting to know the community well.

James said he is particularly proud of the decreased crime rate he has seen in his time with Spencer and credited his staff for taking their jobs seriously.

“Because of that, the lives of people in Spencer and our schools is safer than before,” James said.

Spencer Alderwoman Sharon Hovis called attention to James’ run publicly at the board’s regular meeting on Aug. 10. James told the board he hopes to continue to serve the town if his run is unsuccessful.

“I want to continue to work here,” James told the board. “I love this town, I love the people here and I’ve given 11 years of my life.”

James said he discussed running for the office with Town Manager Peter Franzese before making the decision.

Hovis, a retired police chief, commended James for his ambition and said she does not think he will fail.

“I think we’re going to be losing us a chief,” Hovis said.