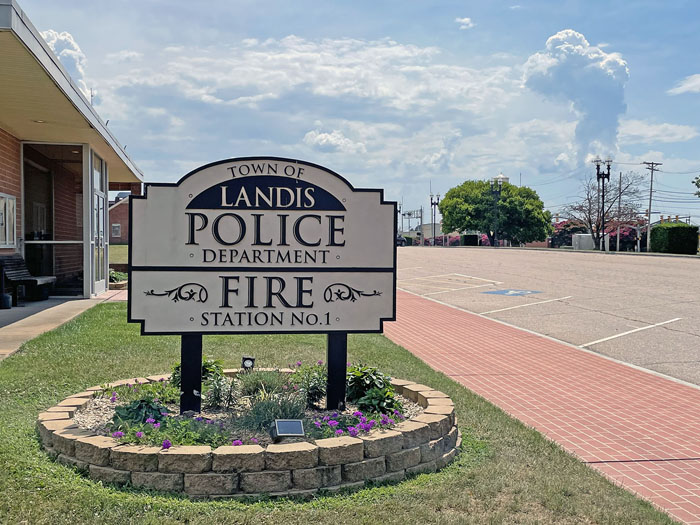 A sign at the front of the Landis Police Department and Fire Station No. 1. Natalie Anderson /Salisbury Post

Public Safety Director Zachary Lechette on Wednesday said the department became aware of positive cases and potential exposure in the previous 48 hours. The fire department completed contract tracing and confirmed three cases, he said. The department also found personnel in the fire and police departments had been exposed to those who tested positive. The two departments work in tandem as Landis transitions to a public safety model.

“We want to be sure that we are not unknowingly exposing the public when we go in and out of their homes or businesses to COVID-19,” Lechette said. “This is why we have decided it is in the best interest of our employees and our citizens to temporarily suspend services by the Landis Fire Department while our members recover and quarantine.”

The Landis Fire Department will transfer its calls for service to the neighboring departments in China Grove and Kannapolis for primary coverage. Lechette told the Post the suspension is just for the fire department, but police officers who have been exposed or tested positive are also undergoing the two-week quarantine process.

Lechette emphasized the quarantines will not result in a lapse of police coverage in the town. The town also plans to contract with a cleaning service to professionally clean and disinfect both fire stations and all apparatus.

“We routinely operate under mutual aid agreements with other departments and we know the needs of the town will continue to be met during this time,” Lechette said. “I ask that everyone please keep the Landis Fire Department in your thoughts and prayers as we wish our members a quick and full recovery.”

State Board of Elections will determine county’s voting plans…