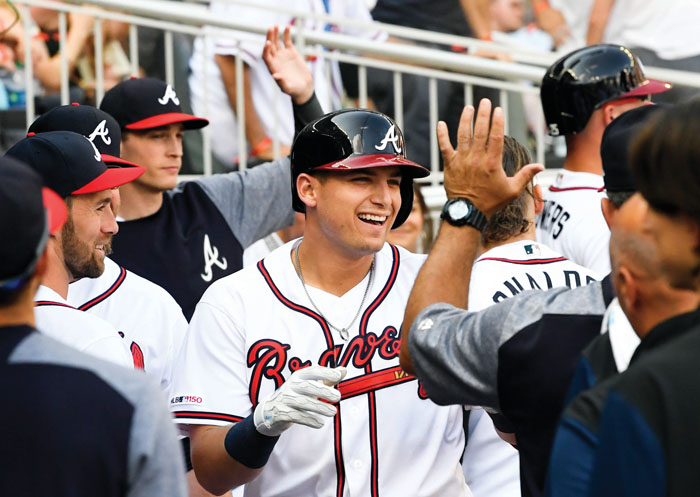 Pinch-hitter Abraham Almonte drew a one-out walk against Miami starter Sandy Alcantara, stole second and advanced to third on a wild pitch. Soler fought back from an 0-2 count and hit an opposite-field line drive to right that scored Almonte.

“In that at-bat, I tried to stay calm because I was a bit anxious,” Soler said. “I let it come to me.”

Chris Martin (2-3) got the win by pitching a scoreless seventh. Luke Jackson followed with a scoreless eighth, and Will Smith got his 26th save with a perfect ninth.

“There are some really good things that happened in that game,” Braves manager Brian Snitker said. “That’s a good baseball game. Solid.”

Alcantara (7-11) was lifted for a pinch-hitter in the eighth. The right-hander allowed one run and five hits, with seven strike outs and one walk.

“Sandy was electric out of the gate,” Marlins manager Don Mattingly said. “He had a really good breaking ball, pounding the strike zone, getting the ball where he wanted it to be. He was on the attack. He was forcing them to swing the bat. He was really good.”

In his two last home starts, Alcantara has yielded three runs in 15 innings, while the Marlins scored once.

“That’s tough, I can’t do anything about it,” Alcantara said. “I just have to keep my head up, do my job and keep pitching.”

Atlanta had the first threat in the sixth. Ynoa reached on a leadoff infield single, advanced on a groundout and reached third on Freeman’s two-out single to left. Alcantara retired Riley on a inning-ending force-out.

Miami loaded the bases in the bottom half, but failed to score. Alcantara reached on a fielder’s choice and advanced on Miguel Rojas’ single that chased Ynoa. Isan Díaz singled off Tyler Matzek before the reliever retired Lewis Brinson on a pop out and struck out Jesús Sánchez.

Ynoa returned from a three-month stint on the injured list and allowed three hits, struck out four and walked one in 5 1/3 innings. The 23-year-old Ynoa broke his pitching hand, slamming it on the dugout bench in frustration after he was removed from an outing against Milwaukee May 16.

“It was a good outing, what matters most is to help the team win,” Ynoa said.

The Braves will attempt to sweep their third consecutive road series Wednesday. Their current road surge began with a three-game sweep at St. Louis on Aug. 3-5 and continued at Washington last weekend.

“I think sometimes for these guys to get on the road, they can just get the rest,” Snitker said. “They’re not as in demand as they are at home a lot of times.”

The incident that forced him to miss extended time prompted Ynoa to reflect on channeling emotions.

“I learned a lot from this experience, mostly how to handle the efforts and outings that don’t go the way you want them to,” Ynoa said. “And how to reel them in and come back even stronger from those bad outings.”

The Braves optioned RHP Jacob Webb to Triple-A Gwinnet for Ynoa’s spot on the roster. … The Marlins optioned LHP Braxton Garrett to Triple-A Jacksonville and recalled RHP Luis Madero. Garrett started the series opener Monday, and his outing of three plus innings was marred by six walks.