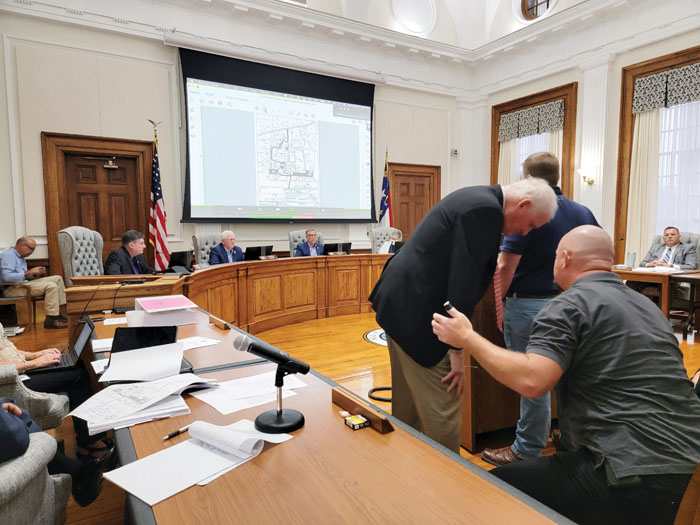 SALISBURY — A rezoning hearing about Reaper’s Realm Haunted House and Trail extended late into the night Monday as the business sought approval from county commissioners to have events 30 days per year after previously operating unpermitted and being the site of a shooting in September.

Reapers Realm sits between Daugherty and Old Linn roads in the China Grove area. The request being considered Monday would rezone some or all of four parcels from “residential agricultural” to “commercial, business, industrial,” apply conditions for the business’ operation and create a new internal traffic pattern. Four hours into Monday’s meeting, commissioners were conducting a public hearing for the rezoning after hearing from county staff and the applicants.

Dozens of people filled the commissioners chambers to listen or speak during the meeting.

Reaper’s Realm and its supporters, who made up a majority of the attendees, framed a denial as ensuring a family owned business’ closure and said the facility’s owners have learned from previous issues. Opponents primarily expressed concerns about noise and traffic, clarifying they weren’t interested in attacking a small business. 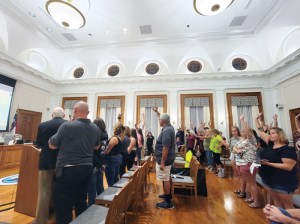 The Rowan County Planning Board in July voted against the rezoning request, saying the proposal would conflict with surrounding residential uses and be a benefit to the owner at the expense of neighbors.

Al Benshoff, a Concord-based attorney working on the project, said the Rowan Planning Board looked at the matter as “an absolute” and that county commissioners needed to consider five factors, including the size of areas proposed to be rezoned, detriment to landowners, relationship between actual and permissible development, why the action is in the public interest and conditions warranting the amendment. He called it a “balancing test.”

He also encouraged commissioners not to punish owner T.J. Jenkins for “errors committed in the past.”

Those errors, said Rowan Planning Director Ed Muire, included building structures without proper permits or approval from county departments. He said Jenkins made efforts to correct problems once he was made aware of them.

Muire also said it wasn’t clear that Reaper’s Realm abided by a stop work order in 2014 for a haunted house building originally permitted as a residential storage facility. However, engineer Jamey Basinger said it was clear when he inspected the structure in 2017 that construction stopped before completion.

When a shooting erupted in September from a large crowd of people on opening night of Halloween events, Reaper’s Realm was operating without a permit. One man drove himself to Atrium Health Cabarrus in Concord with a gunshot wound. Following the shooting, county commissioners OK’d a temporary permit for the rest of the season and said further temporary permits would not be approved.

Benshoff said the business, which is now eight years old, would be “a new and different” Reaper’s Realm.

“Past is not prologue,” he said. “We’re not asking for a return to the status quo.”

Some conditions attached to the rezoning request included:

• Limiting operations to 30 days per year, with a maximum of 20 of them around Halloween and others near St. Patrick’s Day and Valentine’s Day.

• Adding new entrance from Old Linn Road and making an entrance off of Daugherty Road exit only, with the exception of emergency vehicles.

• Creating a new traffic pattern inside of the property that includes a turnaround point near the entrance at Old Linn Road, an internal road near the property line and multiple parking lots.

Commissioner Mike Caskey and Judy Klusman asked whether the facility would open on nights when there wasn’t enough sheriff’s deputies. After a back and forth, Jenkins said, “No.” In response to another question from Klusman, Jenkins said there wouldn’t be private events. Benshoff addressed concerns about whether the rezoning complied with land use plans by calling the plans outdated and likened the haunted house to a home-based business.

Michael Coffee, who also lives in the area, responded to concerns about declining property values by saying that he’s received about a dozen letters offering to buy his property. A number of other supporters spoke about the personal growth and benefits the business offers to its employees.

Following the public hearing late Monday, commissioners were set to deliberate and vote on the rezoning.

David Freeze: A lot of hard riding with more…