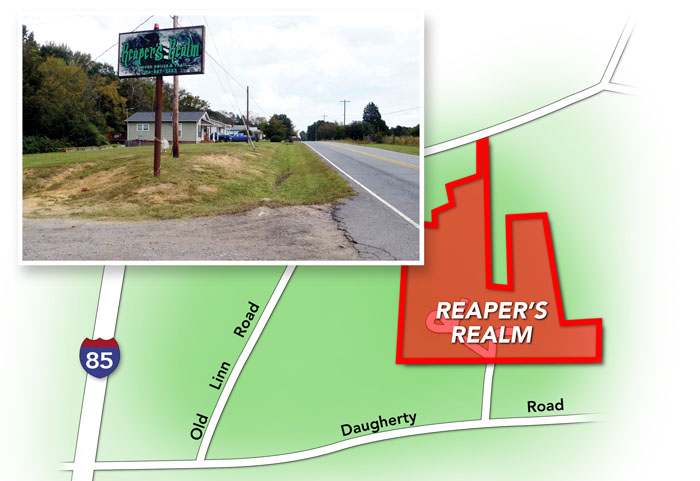 SALISBURY — Reaper’s Realm may live to scare another day.

After nearly six hours of discussion, Rowan County commissioners on Monday reversed course and agreed to draft a temporary permit for Reaper’s Realm Haunted House and Trail instead of voting on a more permanent zoning change.

Commissioners’ decision Monday night came just before midnight when it appeared at least three members of the county board would vote to deny the rezoning, which came with a list of conditions. The rezoning aimed to eliminate the need for temporary permit approvals that allowed Reaper’s Realm to operate between Daugherty and Old Linn roads in the China Grove area.

Last year, commissioners gave the eight-year-old haunted house a temporary permit to complete the Halloween season after a shooting occurred in a crowd of hundreds and one man sought treatment at a Concord hospital. When the shooting occurred in September, the facility was operating with an expired temporary use permit, and county commissioners told Reaper’s Realm proprietors they needed a more permanent solution.

The proposal on commissioners’ agenda Monday involved rezoning a swath of land from “residential agricultural” to “commercial, business industrial” and creating a number of conditions for the business’ operation. Conditions included a limit of 30 operating days per year, 1,200 patrons per day, a new entrance on Old Linn Road, a new internal traffic pattern, five security guards and five sheriff’s deputies on duty at all times as well as a “command post” for emergency personnel.

Commissioners Chairman Greg Edds appeared to seal the rezoning’s failure late Monday when he told the audience,“I will not vote to grant permanent zoning.” But he also called a denial “heartbreaking for everyone” after wondering aloud about the business’ future.

After Edds’ comments, commissioners talked among themselves and emerged with a suggestion from Commissioner Craig Pierce, who proposed an identical temporary use permit to the year prior and a caveat that Reaper’s Realm submit an updated zoning application in January.

That proposal attracted swift scrutiny from Commissioner Judy Klusman who said reviving last year’s permit didn’t address safety concerns about guns in the facility’s parking lot and access for fire, EMS and police vehicles in case of another emergency. As part of its rezoning, Reaper’s Realm proposed an entrance-only road on Old Linn Road and an exit-only road at Daugherty Road, with emergency vehicles excluded.

“It’s the responsibility of this commission to think of everything to keep our citizens safe,” Klusman said.

“The road was blocked,” he said.

Commissioners settled on a motion to table the discussion, ask Reaper’s Realm to work with Rowan County Planning Department staff on acceptable conditions and call a meeting to review a temporary use permit with new conditions.

Concerns from neighbors focused on noise, traffic and the specter that another incident could cause patrons to scatter onto residential properties. Opponents presented a petition with 156 names.

Ann Deyton, whose property is adjacent to Reaper’s Realm, said she wanted to live in a small, peaceful neighborhood and that there’s “no way to know what the future holds for our small community” if the rezoning was approved. Teresa Sloop, another neighbor, asked commissioners to “help me be able to say that my community is going to be able to be safe.”

Rowan Planning Department Director Ed Muire said Reaper’s Realm built multiple structures without proper approval from county government. Though, he said owner TJ Jenkins made efforts to correct problems once he was made aware of them.

Reaper’s Realm and its supporters presented a petition with more than 2,100 names amassed using the website Change.org. On the petition website and during the meeting, Reaper’s Realm framed a denial of the rezoning as closing down the business. Michael Coffee, who said he lived nearby, rebutted property value concerns by saying he’s received up to a dozen letters offering to buy his property. Other speakers spoke about ways Reaper’s Realm helps employees and community members.

A study of sound at the haunted house showed only two locations exceeded allowable levels, but commissioners questioned its validity because the study did not occur during normal operations.

While the Rowan County Planning Board in July voted against the rezoning request, Concord-based attorney Al Benshoff, who was working for Reaper’s Realm, said that board looked at the matter “as an absolute.” County commissioners needed to consider five factors, including the size of areas proposed to be rezoned, detriment to landowners, relationship between actual and permissible development, why the action is in the public interest and conditions warranting the amendment. He called it a “balancing test.”

After the meeting, Commissioner Craig Pierce said security was his primary concern. It’s important to avoid focusing on the shooting incident, he said.

“We’ve gotta quit fixating on this gunshot,” Pierce said. “I mean, you can have that in Main Street Salisbury. So, you can’t put people in jail when they go to an amusement park. Putting up a 10-foot fence, that don’t solve nothing. If you’re going to wand everybody, they’re going to quit coming.”

Commissioners Chairman Greg Edds said public safety is the highest short-term priority for Reaper’s Realm. After that, questions focus on whether the business is appropriate in a neighborhood that is mostly single-family residential, Edds said.

“Approving a temporary permit for this season gives him a chance to work on his long-range plans while addressing some of the things that are of concern to the neighbors,” he said after the meeting.