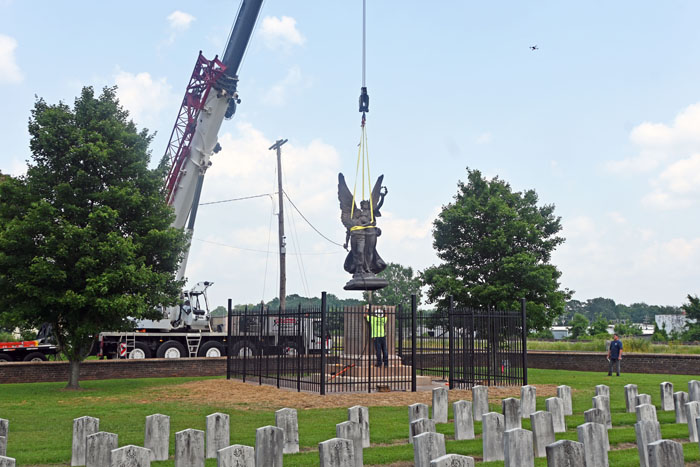 Natalie Anderson/Salisbury Post — Construction crews place the "Fame" Confederate monument on its base at its new home overlooking Confederate burial sites at a historic cemetery on North Lee Street on Friday, July 23. The base, which was transported and placed separately, weighs 14,000 pounds, while the entire structure weighs more than 42,000 pounds. The monument has sat in an undisclosed location for more than a year following its removal from the intersection of West Innes and Church streets.

SALISBURY — The Historic Salisbury Foundation has received a donation of land next to the Old Lutheran Cemetery on North Lee Street.

The anonymous land donation will be open for public use under the condition that anyone using the lot cleans up after themselves.

The empty lot will provide parking next to the cemetery, which is the location of the “Fame” Confederate statue. The Historic Salisbury Foundation says the lot can also be used by train enthusiasts to watch the nearby tracks. Previously, the cemetery had a small road for car access to the cemetery.

“This gift will also create tourism opportunities for our historic assets as well as provide a place for the train buffs to watch and record train activity. I thank Historic Salisbury for sharing their newest asset with the broader community,” said Mayor Karen Alexander.

John Lewis Beard in 1768 gave the original property for the Old Lutheran Cemetery, known as the “German Burying Ground,” to the Lutheran church in Salisbury for the purpose of erecting the first church in Salisbury. It was a graveyard where his young daughter was buried.

In 1824, the Beard family gave the adjoining 3-acre lots to the city of Salisbury to expand the cemetery to encompass an entire city block. When the railroad came through in the mid-1850s, it took some of that property. So, it is no longer a full city block. At first, a wooden fence surrounded it, but in 1872 the current brick wall was erected.

Notable figures in Salisbury’s history are buried in the cemetery, including Judge Archibald Henderson; Lewis Beard, who built the first bridge over the Yadkin River; Congressman Nathaniel Boyden; Charles Fisher, who was the second president of the N.C. Railroad after John Motley Morehead and for whom Fort Fisher was named.

The foot of James Reid is also buried in the cemetery. Reid lost his foot in a railroad accident in 1893.