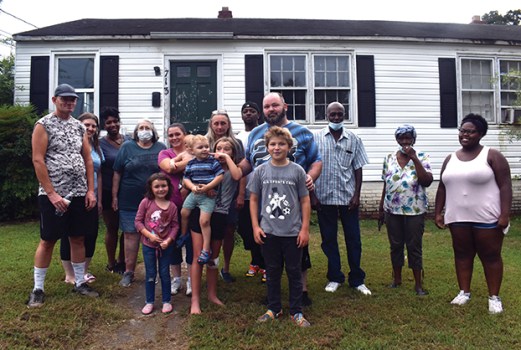 After being told they must vacate their homes in about a month, the residents of Eaman Park have formed a united front and have found solace in each other. They have also shared information about potential resources avaialble to them if they are evicted in September. Ben Stansell/Salisbury 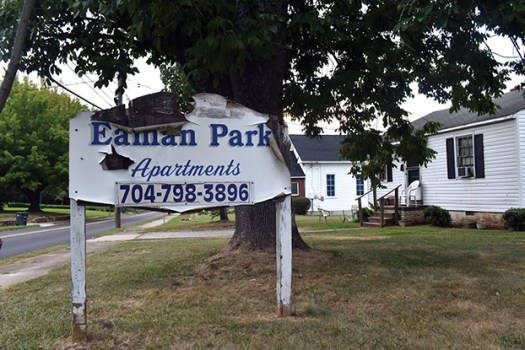 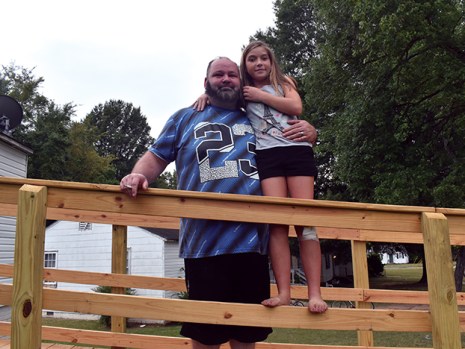 Gregory Shelito stands with his daughter, Alyssa, on the ramp that was built outside of the apartment where he lives with his wheelchair-bound wife. The ramp was built only a few weeks before he received notice that he has to leave Eaman Apartments in September. Ben Stansell/Salisbury Post

SALISBURY — After signing for the certified mail handed to him by a courier, Remun Roberts quickly tore open the envelope and read the letter waiting inside.

Typed on the piece of paper in his hands was a notice stating he had to vacate his apartment at Eaman Park by Sept. 6 or face eviction. The letter, which arrived Aug. 4, was signed by Mike Sharpe, the owner of the apartments near Salisbury High School off Lincolnton Road. There are 35 addresses listed for the complex on the Rowan County tax map and more than 80 people who live in the apartments.

In the letter, addressed to all tenants of the apartment complex, Sharpe said he sold Eaman Park and the buildings are going to be demolished starting on Oct. 1 to make way for affordable housing.

After letting reality sink in, Roberts walked out of his apartment and watched his neighbors react to the shocking news. He even had to deliver it to some.

“My neighbor, she’s an elderly lady named Kathy,” Roberts said. “She’s lived here probably seven or more years. I told her what was going on and what happened. She was still sitting in her car at that time, but she sat her head down on the steering wheel and started crying.”

Given just a month to find new housing, residents of Eaman Park are still reeling from the news they’ll have to vacate their apartments. Several residents are uncertain where they’ll go next or how much it will cost them to move.

“We just need more time,” said Linda Persinger, who has lived with her granddaughter at the apartments for almost two years.

Persinger, who works at Salisbury produce packing company Freshouse, said she’s been unable to find an affordable place to live in Rowan County.

“I have been from Gold Hill to Kannapolis looking for a place. Nobody has anything available right now,” Persinger said. “And for the homes, you have to pay three times the amount of rent.”

The search for living arrangements has cost Persinger time and money, and the only available apartment she could find is out of her price range.

Sakelo Lilly, who said he hasn’t finished the full term on his first 12-month lease at Eaman Park, has experienced similar difficulties.

“If you give us a year time frame, or even just six months, maybe it wouldn’t be that bad,” Lilly said. “I’ve driven around this whole area and there’s nothing open. I’ve looked on Zillow, Trulia, and other websites and there’s nothing.”

The lack of time they’ve been given before they have to vacate the premises is the biggest and most immediate hurdle facing Eaman Park’s residents, but it’s not the only one.

Three weeks before receiving the notice in the mail, Gregory Shelito and his family had a wooden ramp installed in front of their apartment in Eaman Park. The ramp gives Shelito’s wheelchair-bound wife access to their home. The ramp, which he said cost $5,000, was installed over the course of a week by volunteers from a local church. A portion of the money for the ramp was also donated by the church, with the rest coming from Shelito’s mother.

“We built this ramp just so my wife could come home,” Shelito said. “I think (Sharpe) knew he sold the property. Instead of saying ‘Hey, don’t waste your money on this,’ he said, ‘You can go ahead and do this.’ Then he gives us this letter.”

The ramp is not easily movable. So, Shelito is worried about finding an apartment that his wife can get in and out of without too much difficulty.

“It’s next to impossible to find a place that’s handicap accessible,” Shelito said.

For Millicent Miller, the move from Eaman Park could disrupt her husband’s dialysis treatment. He currently receives treatment at a clinic a short drive away. If they’re forced to move outside of Salisbury, Miller said, it would force her husband to transition to a different provider.

Debbie Garrison, 70, has been planning to move from Eaman Park for years, but she was still saving money to make it happen. Her apartment, Garrison said, hasn’t been maintained properly and has had issues with bug infestations. Although she doesn’t like where she lives, Garrison said she doesn’t currently have anywhere else to go.

The impending eviction, she said, is all that’s been on her mind for the last week.

“I don’t hardly sleep,” said Garrison, who is retired and on a fixed income. “Anytime you wake up in the night or in the morning, it’s the first thing on your mind. What’s going to happen today? Where am I going to go?”

Several of the residents who spoke to the Post said they’ve been approved for rental assistance through the state’s HOPE program past the date on which they’re supposed to vacate Eaman Park. The letter from Sharpe said the money could be transferred to a new apartment, but finding that apartment is the problem.

The nationwide eviction moratorium extended by the Centers for Disease Control prevents landlords from evicting tenants for nonpayment of rent in counties such as Rowan, where there is a high rate of COVID-19 transmission. It is unclear if the moratorium applies to a situation in which apartments are destined to be demolished.

Multiple residents said they’ve attempted to reach Sharpe by phone to discuss the situation, but no one has had success. The Post also wasn’t able to reach Sharpe for a comment.

According to records from the Rowan County Register of Deeds, the Eaman Park property was purchased by James Michael Sharpe from Kent Development Corporation for $366,000 in September. However, residents who have lived in the complex for several years say that Sharpe has been their landlord since they moved in.

Online records haven’t been updated yet to reflect the reported sale.

The letter delivered to Eaman Park residents said the apartments were going to be torn down to make way for affordable housing and that the project would start Oct. 1. The city of Salisbury, however, must approve a demolition permit. So far, it hasn’t received a request for one.

The approval of a demolition permit is a 10-day process during which the city severs utilities, verifies ownership, holds a hearing and secures a $2,000 performance bond to ensure the completion of the work.

Even if there are plans to build affordable housing in the area, residents of Eaman Park said they don’t understand the logic.

Several residents say they’ve contacted both city and county officials about their dilemma. Others say they’ve already reached out to local organizations such as Rowan Helping Ministries to check on the availability of temporary housing.

“We just need help,” Garrison said. “I don’t know what we’re going to do.”