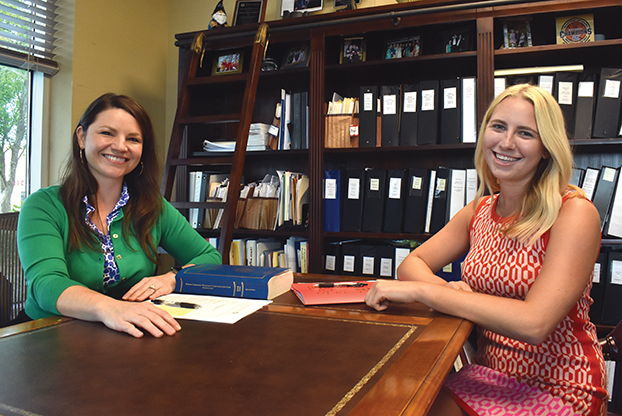 After following her father's footsteps into the legal field, Sara Pross (right) has found a mentor in Whitney Wallace Williams. Williams (left) credits Sara's father, Mike, with teaching her much of what she knows about being a lawyer. Ben Stansell/Salisbury

SALISBURY — Growing up as the daughter of two lawyers, Sara Pross knew what she didn’t want to do for a living.

To drive home the point, she often wore a gray shirt with “Harvard Law School … Just Kidding!” printed on the front.

What Sara did want to be when she grew up was a traveling nurse. By the time she enrolled in Clemson University in the fall of 2019, she’d already earned her certified nursing assistant license and was on her way to achieving that dream.

Looking to fulfill course requirements, Sara decided to sign up for a legal class in the fall of her sophomore year.

“It was criminal law and it was just for fun,” Sara said.

The class soon became something more — an unexpected way for Sara to connect with her father, Mike, a longtime attorney at Wallace & Graham who’d passed away in 2018 from a rare blood cancer.

“The second I started taking that class, I kept finding myself reading a case and thinking, ‘I wonder what my dad might say?’ Or, ‘This is probably what my dad would be thinking.’ I was constantly in that mindset. For that reason, I fell in love with it.”

Suddenly, Sara found herself going down the career path she’d adamantly opposed for much of her life. Like her father, she wanted to be a lawyer.

“I want to be there for the people who can’t,” Sara said. “That’s exactly what my dad did. He prided himself on helping those people who couldn’t.”

While searching for an internship in the legal field this summer, Sara found her place at her father’s firm learning the intricacies of workers compensation and personal injury law under the guidance of Whitney Wallace Williams.

Mike Pross started at the law firm in 1998, a year before Sara was born. As a young child, Sara grew up in the orbit of the firm’s legal offices at 525 N. Main St. in Salisbury. She was there for social gatherings and holiday parties and still fondly remembers being a Christmas cookie contest judge when she was 8 years old.

“A big part of my life growing up was Wallace and Graham and the people in it,” Sara said.

One of those people was Williams, who had a special bond with Sara’s father, who mentored her when she first joined the firm in 2008.

“(Mike) basically trained me the whole entire time, up until his death,” Williams said. “He helped me with my trials, he sat through long winded depositions and helped me understand what I was doing wrong and improve. Even though he was insanely busy, there was never a time I called him, which was like eight times a day, and he didn’t give me guidance and help me.”

Mike, who carved out a reputation as a skilled litigator, showed Williams how to efficiently and effectively argue in front of a judge.

“He taught me how to be calm under very stressful situations,” Williams said. “A lot of trial work is having to fly off the cuff and I’m a very extensive preparer. I don’t like to practice off the cuff. I want to know exactly what I’m going to say. He really had to train me to go with the flow and be calm in stressful situations and to think on my feet.”

When Mike passed in 2018, Williams lost more than just a mentor — she lost a friend and confidant.

“It’s been really hard without him,” Williams said. “I constantly want to call him still. There’s been a big hole here at the firm without him.”

When Sara showed up at the firm in early June for what was supposed to be a one-day job shadowing, Williams was the person she worked with for the day. Watching Williams work, Sara said, made her fall in love with the profession even more.

“I was just planning on going Tuesday and I texted (Williams) later that day and asked if I could come back Thursday as well,” Sara said. “Since then, it’s been every Tuesday and Thursday. Now they can’t get rid of me.” 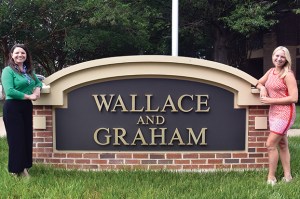 Looking to get hands-on experience in the legal field, Sara Pross (right) interned this summer at Wallace & Graham, where her father spent two decades of his career. Ben Stansell/Salisbury Post

Sara worked closely with Williams throughout the summer, helping her with an almost overwhelming caseload. Throughout it all, Williams is passing on the same lessons to Sara that Mike taught her.

“It’s heartbreakingly beautiful, but Williams always said my dad took her under his wing as his own,” Sara said. “He did this for Williams and taught her, and now it’s like she’s taken me under her wing as her own.”

In addition to learning about the legal system, Sara has uncovered more about who her father was as a person through stories shared by Williams and other members of the firm.

“It’s been very therapeutic and almost bittersweet to come to a place where he was so important to everybody here and bring him with me as I grow up,” Sara said. “Now I’ve stepped into a more mature role, so I’m able to hear these stories about him that he would not have told teenage Sara. For me, it feels like I still have him. He’s still teaching me.”

Having Sara around has also provided Williams with a unique chance to grieve the loss of a colleague and advisor.

“It has been therapeutic for us both to be able to talk about Mike, and share stories, and he would be beyond proud of her and ecstatic to know that his death had somehow encouraged her to be a lawyer and even seek out his mentee to be her mentor,” Williams said.

There were plenty of Mike stories shared when the firm gathered last week at Romano’s Italian Cuisine to celebrate the end of Sara’s summer internship. Each person at the lunch ordered the exact same dish — baked ziti, which was Mike’s favorite.

Sitting around the table, lawyers and staff from Wallace & Graham relayed even more tales about Mike to Sara, including some of his colorful escapades during conferences in Las Vegas.

“I’m not sure if he would want to kill me or laugh for telling Sara those,” Williams said.

With a more well-rounded picture of who her father was as a lawyer and a person, Sara has returned to Clemson for her junior year. She still expects to become a registered nurse, but also plans on graduating a semester early in December of 2022 and going to law school. She has her sights set on the University of North Carolina at Chapel Hill. She might apply for Harvard too, just for fun.

Once she’s a lawyer, like her father, she’ll always have a place at Wallace & Graham.