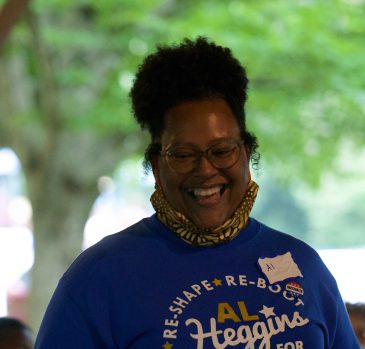 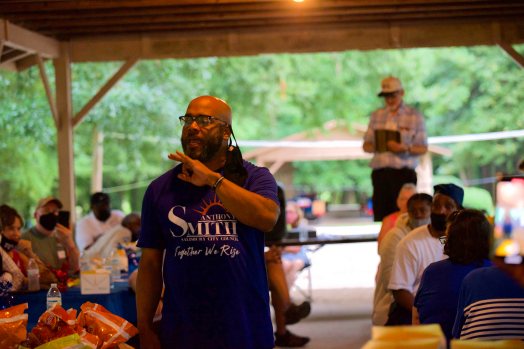 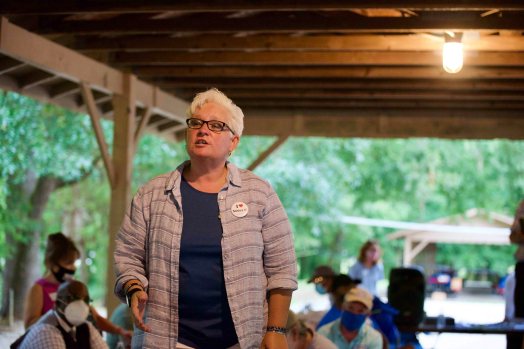 KANNAPOLIS – Local Democrats on Saturday gathered for a meal and to hear from candidates in state and federal races, bringing back an event that was canceled last year because of the pandemic.

The party’s annual festival made its home Kannapolis for the first time. About 80 attendees met at a shelter in Baker’s Creek Park, which is near the county line, for a catered lunch and some comments from nearly a dozen candidates.

Local party chair Geoffrey Hoy said the event is normally held at Shoaf’s Wagon Wheel in Salisbury, but the venue already had a dance scheduled for Saturday. Hoy said the festival was an opportunity to show support for Kannapolis City Council candidate Jeanne Dixon because of the move.

Hoy said the goal this year is simple: elect Democrats.

Heggins told the crowd she wants the city to make good on a commitment to undergo an annual equity report and wants to start “participatory budgeting,” which gets input from the whole community, including people who historically have not participated.

Heggins also spoke about her support for creating a “congress of neighborhoods,” with representation from every neighborhood in Salisbury and making city government more accessible to people with entrepreneurial aspirations.

Sheffield told the crowd she is more than a politician because Salisbury is her home.

“I live there. I work there. I volunteer there. I am connected with every community there,” Sheffield said.

Sheffield said tax dollars are the community’s money. The city needs to invest in the right projects and people have to be brave enough to say “no” when they disagree, Sheffield said.

“Sometimes, I’ve not been popular in my ‘nos,’ and I sleep fine every night,” Sheffield said.

Smith said he prides himself on working with young people. He said the city needs more spaces for young people most affected by poverty and inequities to be comfortable and explore entrepreneurial ambitions.

He also talked about violence in Salisbury, noting the increase in violent crime this year. He said the city should implement a “cure model” to address violence.

Smith also noted his support of participatory budgeting in line with Heggins.

“We need people who are historically left out of that conversation,” Smith said, noting their participation in the process allows people to feel ownership of the city and the weight of decisions to use resources.

East Spencer Mayor Barbara Mallett also was among the candidates who spoke Saturday. She has served six terms in her role and hopes to win another. She told the crowd the town is working hard to change its face and opportunities, noting East Spencer has received millions in grants to improve the community.

“Everything is looking well for northern Rowan County,” Mallett said.

Shawn Rush, a candidate for East Spencer’s Board of Aldermen, said he wants to reimagine the town. He noted his vision for a greenway in town, paving streets and bringing attention to housing opportunities.

Spencer Alderwoman Pat Sledge Pat Sledge told the crowd about the recent successes of the town’s board, including two public projects in the revitalization of Park Plaza, development of a trailhead at the Yadkin River and securing $750,000 in Community Block Development Grant funding for local homes.

Dixon, a retired Child Protective Services professional and political newcomer, spoke to the crowd as well. She told attendees she’s been attending Kannapolis meetings and expressed her concern about how the city is allocating funds for revitalization of some areas while others are neglected.