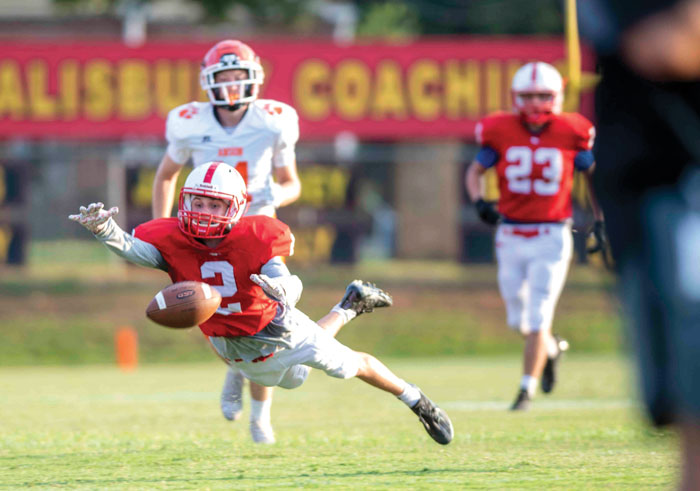 Fifth in a series of reports on local high schools …

Pinckney broke the school record for career rushing yards with 4,878, good for third place in Rowan County history. One more game and he would’ve topped 5,000, but East’s season was just seven games, with no playoffs. Pinckney’s final appearance for the Mustangs was an insane 393-yard, six-TD game at North Iredell.

East also Vincent Jones and Tahj Young, exceptional players who were in the program for a long time. Jones was East’s most explosive player not named Sammy, while Young was a defensive anchor in the secondary.

“You take away those three athletes and it changes things in a lot of ways,” East head coach John Fitz said. “It changes team speed. That doesn’t mean we’ll be slow this year. We may not have burners, but we’ll still be faster than some people.”

Fitz was pleased that East was able to compete with always fast and athletic Anson in Saturday’s Rowan County Jamboree.

Normally run-heavy, East will rely on the pass more this season and usually will employ four wideouts to spread the field.

Last season’s first-string quarterback Cameron Padgett did not return to the gridiron. He loves to complete and loves football, but his future is as a baseball pitcher, and the UNC commit will be devoting himself to baseball and the weight room.

Baseball standout Aiden Schenck took some snaps last season and usually barreled over several defenders when he did, but he mostly played defense. He’s the new QB. He has good size and toughness and is a hard-nosed runner. He took all the QB snaps on Saturday, so there’s no doubt he’s the guy.

“He had some quarterback experience back when he was at A.L. Brown, but that was a completely different system and it was two years ago,” Fitz said. “But he’ll be fine. He’s a really good player who can do a lot of things. He’d be happy playing defense. He can play about anywhere on the field.”

Sophomore Tijon Everhart will be the backup QB.

Fitz hesitated to name a front-runner at running back. Pinckney will be a hard act to follow.

“We don’t have a Pinckney and don’t have anyone close,” Fitz said. “We do have three or four kids that we like, and we’ll handle running back by committee.”

Josh Roman-Soto, who had a rushing TD in the spring, will start at linebacker, but he’ll also be part of the running back committee. He’s got the most experience among the returners.

“We like to two-platoon as much as possible, but we will have some kids playing both ways,” Fitz said.

East also isn’t experienced at wideout, a position group where Young and Issac Hinceman were the standouts in recent years.

Dominick Dale, a 240-pounder, runs very well for 240 and can be a matchup problem for 170-pound safeties. East plans to use him in the slot and can also use him as a traditional blocking tight end in short-yardage situations.

Evan Porter, Cayden Usher, Landon Jones and Cole Eagle are more names to know as far as the receivers.

Porter is the younger brother of Wesley Porter, a perennial all-county DB in his days with the Mustangs.

Eagle is East’s placekicker, but he’s capable of catching a lot of passes.

“I didn’t know how good an athlete he was until track season when he started long jumping for us,” Fitz said. “He’d never done it, but he did very well in that event. He’s pretty explosive.”

Senior left tackle Colby Quick is the only returning starter on the offensive line, so veteran assistant Nate Santiago will have to mold a new group.

“We had a freshman snapping in the Anson scrimmage and the rest of those guys are sophomores,” Fitz said.

Carter Honeycutt is the most likely replacement for Hinceman at punter.

On the defensive line, where the Mustangs will use a four-man front, Victor Ponce is a senior starter with a lot of games under his belt.

Dale figures to be a beast on the defensive line.

Morgan Padgett, Cameron’s younger brother, has grown to 6-foot-5 and should be a force on defense, probably at defensive end, but maybe at linebacker.

“He was a really big surprise last year,” Fitz said. “He has a nose for the ball and he makes plays.”

He did not participate in the scrimmage, as he didn’t have enough practice days in. He’s been playing baseball with the South Charlotte Panthers showcase team.

Fitz was enthusiastic about how sharp the defense looked in the scrimmage against Anson. Chase Burris, who coaches the linebackers, is East’s defensive coordinator.

East has 74 players in action, so the Mustangs won’t have any problem fielding a jayvee unit. More schools are having trouble with that this year. North Rowan will have no jayvee team, and East was unable to find another jayvee game for the opening week.

East got off to an 0-3 start back in the spring, before winning a high-scoring thriller against Carson on a field goal by Eagle. East’s only other win came on the night of Pinckney’s explosion against North Iredell.

It’s a good bet East will win more this fall. How many more will depend on that improved defense.

New conference (2021-25): 3A South Piedmont Conference with Carson, West Rowan, South Rowan, Concord, Central Cabarrus. NW Cabarrus (Lake Norman Charter is in the conference, but does not compete in football).