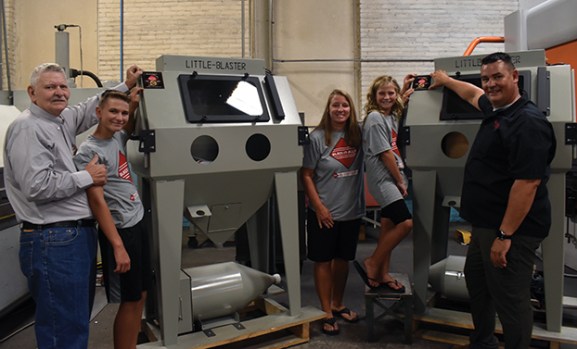 Three generations of the Hess family work together to place commemorative 50th anniversary stickers on two of the machines produced by Blast-It-All. From left to right: Tom, Parker, Sundee, Emerson and Telley Hess. Ben Stansell/Salisbury Post 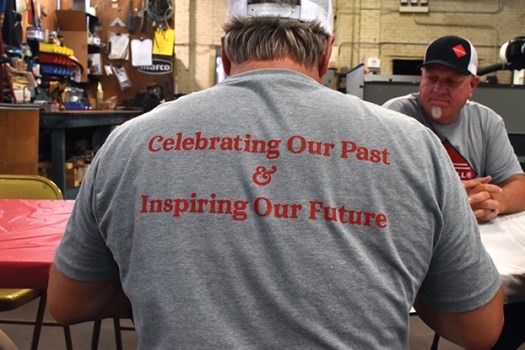 The message on the back of the 50th anniversary shirts handed out to Blast-It-All employees during the company's celebration. The company is deeply rooted in its history and has dedicated significant wall space in its office to pictures and memorabilia. Ben Stansell/Salisbury Post 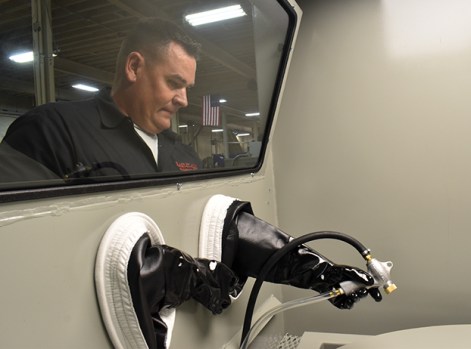 Telley Hess demonstrates how someone might use one of the company's blasting machines. Blast-It-All's products can be found in factories across the country and globe. Ben Stansell/Salisbury Post 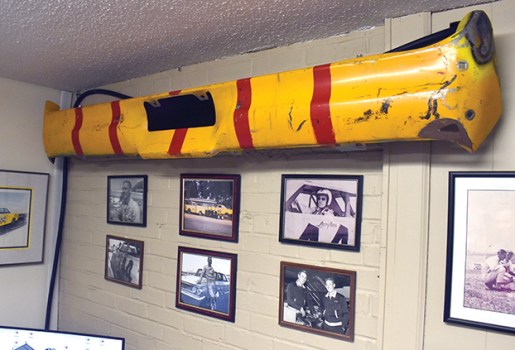 The rookie racing bumper used on Larry Hess' first racecar in the 1960s. Larry, the founder of Blast-It-All, was also a NASCAR driver for several years. The bumper is one of many objects and pictures on display in the company's office. Ben Stansell/Salisbury Post

SALISBURY —  After loading up a few blasting machines into the back of his brother’s pickup truck, Tom Hess gave his sibling some advice.

“I told him don’t come back until they’re sold,” Tom said.

That was in 1971, when Tom and Larry Hess were just getting their business off the ground. The brothers, both with a passion for race cars and service in the Marines, decided they wanted to make and sell blasting machines. They use pressured air and fine, abrasive materials to clean, smoothen, de-paint or achieve other results when finishing or improving the surface on a number of different materials.

Larry must’ve taken Tom’s advice to heart. Those machines were sold and Blast-It-All was born.

Blast-It-All has been selling its products ever since and celebrated its 50th anniversary on Thursday. Now led by Tom’s son, Telley Hess, the company is headquartered in a former cotton mill on Piper Lane, near Fleming Candy Company and the site of a former Salisbury racetrack.

The company acknowledged the milestone two days before the anniversary of the official incorporation date of Aug. 14, 1971. That’s because the 14th is a Saturday and Telley said he wouldn’t be celebrating on Friday the 13th.

Telley brought in a food truck to provide his 26 employees with free lunch and let them spend the day celebrating and playing cornhole in the warehouse instead of working to produce or sell more machines. He even ordered commemorative shirts and invited back former employees to participate in the shindig.

The event was not surprising given the company’s great appreciation for history.

“For all of us, it’s important to know and understand where you came from,” Telley said.

The company’s history isn’t hard to find — it’s hanging on the walls in the hallway outside of Telley’s office. Pictures and other memorabilia representing the past have been affixed chronologically, starting with the 1970s on the right side of the room where a yellow bumper is proudly posted.

The bumper is from the first race car that Larry drove on the NASCAR circuit. Larry was a race car owner and driver for several years in the 1960s. He even competed in the Daytona 500 in 1965, with Tom acting as his “wrenchman” during pit stops. In addition to his racing career, Larry, who moved to Salisbury in the late 1960s, worked as a salesman for a company that made and sold blasting machines.

Larry might’ve continued to work for that company if it hadn’t been for a tragic accident on Jan. 29, 1971. Larry’s father, Lawrence Emerson Hess, was delivering an emergency supply of blood from the American Red Cross to the Apollo 14 launch site in Cape Canaveral when he was killed in a crash.

While mourning the death of his father, Larry felt like the company didn’t permit him enough time to grieve, or properly acknowledge his loss. That catalyzed his departure and the eventual founding of Blast-It-All — a company that he wanted to feel like a family. Once Larry and Tom launched the business in the early 1970s, it was still a tough road to sled.

“It was a long process,” Tom said. “We started with very little money and everything we got we tried to put back in the company as best we possibly could. But we’ve been blessed. The lord has looked after us and we’ve had a good run.”

Business started to really pick up, Tom said, in the mid 1980s.

“Once they found out how good our machine was and that we were selling our machines at a reasonable price, not an extraordinary price, we sold a lot of machines,” Tom said.

In addition to shipping blasting machines to manufacturing companies across the world, Blast-It-All also sent teams around the globe to install what’s called a blast room. The rooms are large rectangular metal containers, not unlike a shipping container, that allow a person to safely perform blasting or painting in an enclosed area.

It was during a trip to install a blast room for a client in New Hampshire where Telley got his first true taste of the business his father and uncle started.

From that point, Telley started spending more time in the company’s shop, helping out here and there where he could while learning the intricacies of the machines they made and how to make them. Although he held a few other jobs early in his career, Telley decided to take over the mantle at Blast-It-All in 2000.

Things have changed over the years, but instead of making just a few models of blasting machines, there’s now a three ring binder full of different designs. That doesn’t include the 500 custom jobs the company has done as well. Different types of Blast-It-All machines can be found in the garages of almost every NASCAR team and in factories producing everything from tires to firearms to toys.

The secret to the company’s 50 years of success, Telley said, is the way it treats its employees.

“We do care an awful lot about our employees here first and taking care of them and their families,” Telley said. “That’s always been a big part of Blast-It-All. And once you care that much for your extended family, which is how we view them, then you learn how to care for your customers in the same way.”

It’s that approach that’s kept Tracy Tatu at the company for 13 years.

“We operate this company as a family,” Tatu said. “It’s hard to find that anywhere in the world.”

Now a sales manager for Blast-It-All, Tatu started with the company after losing his job during the economic crisis in 2008.

“I was wondering what I was going to do with myself and Blast-It-All kind of saved me,” Tatu said. “I was offered a job by Tom and my predecessor Rich Hawkins. They said ‘Hey, come work for us.’ So I did and it’s been great ever since.”

Tatu was one of several dozen past and present employees who gathered around the table for the anniversary lunch on Thursday.

The celebration was about appreciating the employees who have stuck with the company over the years, but it was also about remembering those who are no longer around, like Larry Hess, who passed away in June 2020. Larry’s death was a loss for both the company and Salisbury community. A longtime member of numerous civic organizations, Larry was awarded Person of the Year by the Salisbury Lions Club in 2017.

While employees enjoyed the meal, Telley, his wife, Sundee, and Tom gathered with Telley’s children, Parker, 13, and Emerson, 8, around two of the company’s smallest blasting machines. Three generations of the Hess family worked together to place commemorative 50 year anniversary stickers on the machines.

Although Telley expects to run the company for a long time, he’s already making plans to hand the reins over to the next generation who will be responsible for making sure Blast-It-All continues to prosper for another 50 years.

“This company is positioned for Parker and his sister, Emerson, to carry on the legacy,” Telley said.

More information about Blast-It-All can be found online at blast-it-all.com.