1,000 rubber ducks race for glory at ‘the Bullhole’ 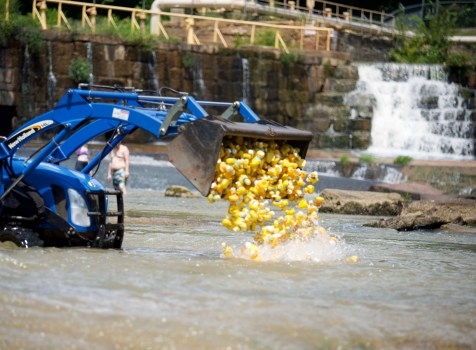 Carl Blankenship/Salisbury Post - A tractor dumps a load of rubber ducks into the water during the Great Bullhole Duck Race at RiverPark at Cooleemee Falls on Saturday. The event is a fundraiser for the park. 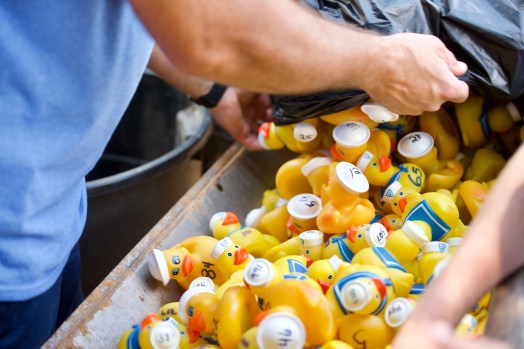 Carl Blankenship/Salisbury Post - There were 1,000 ducks entered in the race.

Carl Blankenship/Salisbury Post - After the ducks had passed the fast, clear water at the base of the falls, they slowed down significantly and spread out as they meandered toward the finish line. 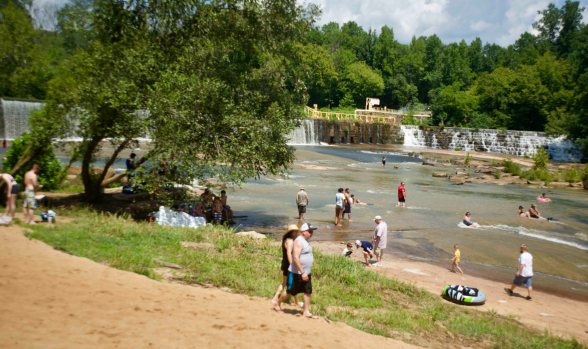 Carl Blankenship/Salisbury Post - The beach was full of families, before and after the race, enjoying the river and beach music pumping from a sound system. 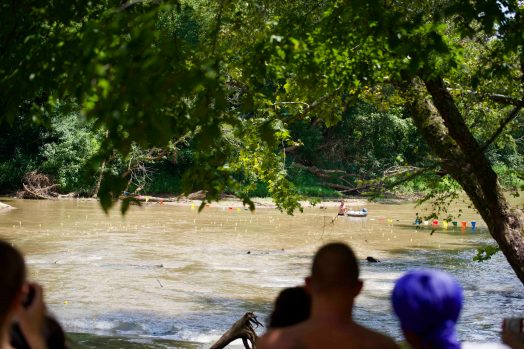 Carl Blankenship/Salisbury Post - People crowded on the hill overlooking the finish line as the speediest rubber ducks crossed and were tossed into floats to swim again next year.

WOODLEAF — A legion of inanimate ducks rode the Yadkin River’s current on Saturday to raise money for a local park.

Saturday was was the 11th edition of the Great Bullhole Duck Race at RiverPark at Cooleemee Falls, known as “the Bullhole.” The event sold 1,000 rubber ducks, which were dumped near the waterfall and snaked their way a few hundred yards downstream. Onlookers were hoping one of their entries floated faster than the others to finish in the top three and net a cash prize.

A single duck was $5, but a quack pack of five came with a discount.

There were a handful of ducks left as the race was about to start. Emcee Stephen Allred pushed the crowd to sell through every duck, and a few people stepped up to get the last spots on the front loader that Jamie O’Neal drove to the middle of the water to let the ducks loose.

The duck swarm’s journey started fast, with the ducks zipping about halfway to the finish in a few moments before hitting slower water and navigating around logs. Volunteers waited in floats at the finish line to recapture the ducks as they passed by. The ducks were all numbered.

Money from ticket and duck sales directly supports the park. Byrne said it helps with little details such as trash bags, paint and tools. It will also help the park save up for larger projects such as purchasing a new ATV.

The event took a hiatus last year because of the COVID-19 pandemic, but it came back in force and sold every duck this year.

Park board member Paul Moore said the park is one-of-a-kind in the region because it gives people a bit of everything.

Moore said part of the fun of Saturday’s event is watching kids get excited about cheering on ducks even though they can not tell them apart from a distance.

Lola Jones Baker volunteers at the park. For her, the work is is all about the kids in Rowan and Davie counties.

“This is a gold mine,” Jones Baker said. “Its been hidden for years.”

Charlie Carter’s duck came in third in the race. The South Davie Middle School seventh grader said he was happy to win.

A Boy Scout, Carter said he hopes his troop can come to the park for service projects and to hike in the future. He was given a few things to do to help out with the event by Byrne on Saturday. He said that added to the fun during the day.