Forest Service maxed out as wildfires stretch across western states 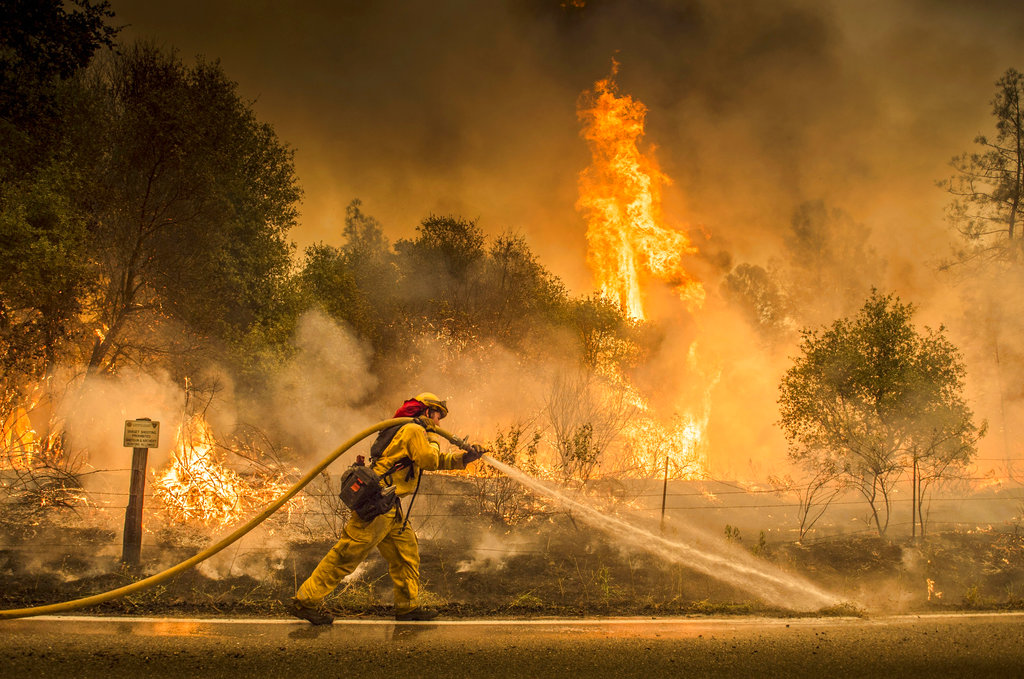 A Cal Fire firefighter waters down a back burn near Igo, Calif. (Hector Amezcua/The Sacramento Bee via AP/File photo)

By EUGENE GARCIA and DAISY NGUYEN

WESTWOOD, Calif. (AP) — The U.S. Forest Service said Friday it’s operating in crisis mode, fully deploying firefighters and maxing out its support system as wildfires continue to break out across the U.S. West, threatening thousands of homes and entire towns.

The roughly 21,000 federal firefighters working on the ground is more than double the number of firefighters sent to contain forest fires at this time a year ago, and the agency is facing “critical resources limitations,” said Anthony Scardina, a deputy forester for the agency’s Pacific Southwest region.

An estimated 6,170 firefighters alone are battling the Dixie Fire in Northern California, the largest of 100 large fires burning in 14 states, with dozens more burning in western Canada.

The fire began a month ago and has destroyed more than 1,000 homes, businesses and other structures, much of it in the small town of Greenville in the northern Sierra Nevada.

The fire had ravaged more than 800 square miles  — an area larger than the city of London — and continued to threaten more than a dozen rural and forest communities.

Containment lines for the fire held overnight, but it was just 31% surrounded. Gusty and erratic winds were threatening to spread the fire to Westwood, a lumber town of 1,700. Lightning could spark new blazes even as crews try to surround a number of other forest fires ignited by lightning last month.

“Mother nature just kind of keeps throwing us obstacles our way,” said Edwin Zuniga, a spokesman with the California Department of Forestry and Fire Protection, working together with the Forest Service to tamp out the blaze.

Meanwhile, firefighters and residents were scrambling to save hundreds of homes as flames advance across the Northern Cheyenne Indian Reservation in southeastern Montana.

The blaze was still burning near the tribal headquarters town of Lame Deer, where a mandatory evacuation remained in place and a second fire was threatening from the opposite direction.

Smoke from the blazes grew so thick Friday morning that the health clinic in Lame Deer was shut down after its air filters could not keep up with the pollution, Northern Cheyenne Tribe spokesperson Angel Becker said.

An air quality alert covering seven Montana counties warned of extremely high levels of small pollution particles found in smoke, which can cause lung issues and other health problems if inhaled.

The fires near Lame Deer combined have burned 275 square miles this week, so far sparing homes but causing extensive damage to pasture lands that ranchers depend on to feed their cows and horses.

In southeastern Oregon, two new wildfires started by lightning Thursday near the California border were spreading through juniper trees, sagebrush and evergreen trees.

Gov. Kate Brown declared an emergency for one of the fires to mobilize crews and other resources to the area of ranches, rural subdivisions and RV parks about 14 miles from the small town of Lakeview.

The blaze grew from a lightning strike to 11 square miles in less than 24 hours, said Tamara Schmidt, a U.S. Forest Service spokeswoman.

Authorities Thursday evening ordered the evacuation of an RV park that stood in the path of the Oregon’s Patton Meadow Fire.

The fires are near the area torched Oregon’s Bootleg Fire which started July 6 and burned an area more than half the size of Rhode Island before crews gained the upper hand. The fire is not yet fully contained and was the nation’s largest until being eclipsed by the Dixie Fire.

Triple-digit temperatures and bone-dry conditions in Oregon, enduring a third day of extreme heat, could increase fire risks through the weekend.

Climate change has made the U.S. West warmer and drier in the past 30 years and will continue to make the weather more extreme and wildfires more destructive, according to scientists.

More than 6,000 square miles have been burned in the U.S. so far this year. That’s well ahead of the amount burned by this point last year, but below the 10-year average, according to the National Interagency Fire Center.

Parts of Europe also are burning, including in Greece, where where a massive wildfire has decimated forests and torched homes, and was still smoldering 10 days after it started.