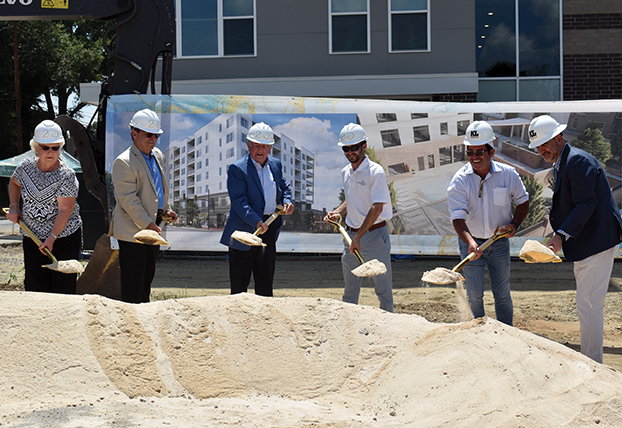 KANNAPOLIS — When Peter Flotz visited downtown Kannapolis for the first time about a half decade ago, he said the city looked and felt empty.

“This looked like a Hollywood set,” Flotz said. “It was like fake buildings with nothing behind them.”

Standing in an empty lot in the city’s downtown Thursday afternoon, Flotz was surrounded by a much different landscape. Breweries, boutiques and barbers have filled in the facades on West Avenue and the town’s baseball team is in the midst of its first season in the $52 million Atrium Health Ballpark.

The revitalization of Kannapolis can be attributed in part to Flotz’s development company, Lansing Melbourne Group, which bought several blocks of the downtown area years ago. The company’s first major downtown project, a mixed use residential and commercial space called Vida, towered behind Flotz as he celebrated the groundbreaking of a new project next door.

“It’s like watching your kid grow up,” Flotz said. “You nurture it, you put everything you have into it and you know at some point it’s going to be on its own, growing on its own and living on its own. That’s what is starting to happen here. Downtown has a life of its own now.”

Although Flotz refers to the building as “Vida Two,” the mixed used project’s official name is 200 Main. It will be constructed at the corner of Main Street and Cannon Baller Way, adjacent to Vida. The building will be approximately 90,000 square feet and will include retail space and 78 residential apartments in a seven-story building. LMG is investing $21 million in 200 Main. The building is expected to be finished by spring of 2023.

“We look forward to welcoming the new residents and business owners of 200 Main. It has already been a pleasure meeting the many people who have already moved into VIDA,” Kannapolis Mayor Darrell Hinnant said. “The dynamic energy of the entrepreneurs who have opened small businesses and those who are moving to our city is inspiring and exciting.

While the Vida units are designed to accommodate young professionals, the apartments in 200 Main will be geared toward adults between the ages of 30-50.

“This will be more mature renters, perhaps larger units that are more sophisticated,” Flotz said.

Flotz said they will be priced 10-12% higher than the units in Vida.

The walkway between 200 Main and Vida will get a makeover and will be an “interactive, pedestrian safe and aesthetically pleasing entrance for downtown visitors.”

An aerial rendering of 200 Main. The roughly 90,000 square foot building will include retail space and 78 residential apartments in a seven-story building. The Lansing Melbourne Group is investing $21 million in 200 Main. The building is expected to be finished by spring of 2023.

The gathering under the sweltering sun on Thursday afternoon was more than just an official start to construction on 200 Main; it was also a celebration of Vida. The building was completed in December and has already reached about 80% capacity.

“This is beyond our wildest dreams in terms of its success,” Flotz said. “We are basically going to be full by October 1st and we didn’t think that was going to happen for at least another year. In the middle of a pandemic, we’ve filled up this building and we’ve filled up 120,000 feet of retail space along West Avenue.”

After Kannapolis officials and staff members ceremoniously shoveled dirt in the lot that will eventually be 200 Main, tours of Vida were provided. The building boasts 289 apartments of various layouts, a swimming pool, fitness center, game room and dog park. There is a public parking deck under the building and  commercial space accessible on West Avenue. The commercial space is still empty, but that could soon change.

“We’ve got about 50% of it with active conversations going on right now,” Flotz said. “Those people will be brought to fruition in leases, I would imagine, by the middle of October or November and then they’ll build out those spaces in the spring.” 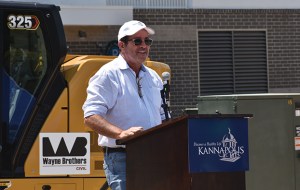 Lansing Melbourne Group is also involved in a project to bring apartments, retail and a hotel space to property overlooking right field at Atrium Health Ballpark. Beyond that, Flotz said there are plans to bring more Vida-like developments downtown.

“What we’re trying to do is populate downtown Kannapolis,” Flotz said. “In order for the retail to survive and for the downtown to become the center of downtown again, we need people living here.” (Vida) was the first step in that direction.”

The Vida project and 200 Main project benefit from the fact that Downtown Kannapolis was designated as a federal Opportunity Zone two years ago. Building in an opportunity zone provides tax benefits to private investors who invest in properties and areas which need to be revitalized.

More information about 200 Main can be found by emailing 200Main@lmgroup.us.