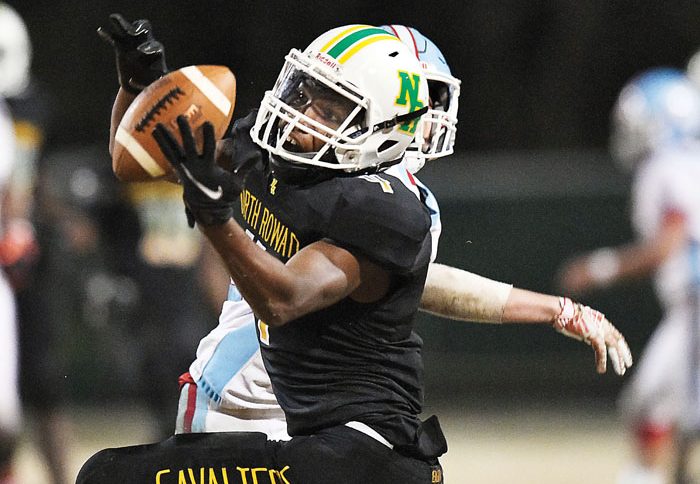 North Rowan's Amari Mcarthur, the county’s reigning 100 meters champ, is among a talented group of receivers returning for the Cavaliers. File photo by Wayne Hinshaw, for the Salisbury Post

But who’s going to get them the ball?

That’s the million-dollar question facing second-year head coach Nygel Pearson, who successfully steered the Cavaliers into the state playoffs through the twists and turns of the spring COVID season.

North was just beginning to hit its stride when the short season ended. Down the stretch, North was an offensive machine, scoring 59 points to close the regular season and putting up an astounding 66 in the first round of the playoffs in a game that was considered a toss-up.

QB Kyree Sims rushed for almost 400 yards in North’s last three games and threw for 269 in a losing cause in the finale.

But Sims is now a Catawba College freshman.

So Pearson and offensive coordinator and QBs coach Quinn Martin have to make a decision on a new field general pretty quickly. North plays at East Rowan on Aug. 20.

“Sometimes you don’t realize how good someone was until they’re gone, and that’s the case with Kyree,” Pearson said with a laugh. “Only God knows who our quarterback’s going to be.”

Pearson probably has got a pretty good idea, but he’s not showing all of his cards yet.

The QB is going to be one of three youngsters. None of them have ever played in a varsity football game — or even a jayvee football game.

Sophomore Nazarion “Naz” Stinson is athletic. He’s played basketball at North, but he didn’t play football back in the spring.

The other two QB hopefuls are freshmen — Jeremiah Alford and Will Klingler.

While North’s new QB is going to be short on experience, he’s going to have talented skill people around him. North will miss towering wideout Kendrell Goodes and fearless back Zay Davis, but the Cavaliers almost always have quality backs and receivers. That’s still the case.

Jaemias Morrow, exploded onto on the scene as a fast and furious freshman with five rushing TDs in his first two varsity outings. While he’s not big, big things are expected of him. Another sophomore, Khoron Miller, also will be a factor in the running game.

North’s junior receivers are considered the most talented male athletes in the school. Amari McArthur is 6-foot-3, 190 pounds, and he can scoot. He’s the county’s reigning champ in the 100 meters. McArthur had 29 catches for 535 yards and five TDs as a sophomore, with most of those numbers coming late. McArthur piled up 387 receiving yards in the Cavaliers’ last three contests. Keep up that pace over the course of a 10-game season, and you’ve got 1,290 receiving yards.

Pearson has been saying for a while that McArthur can be as good as he wants to be, and no one is arguing with that assessment.

Kemon O’Kelley didn’t match McArthur’s production last season, but he’s blessed with similar physical gifts. He’s still got most of his career in front of him, and there’s a good chance he’ll have a breakout season.

Senior Orion Harris is the third returning starter at wideout and is a very solid guy. He reeled in three TD catches a year ago, including two in the playoffs.

North normally will employ four wideouts to spread out defenses. Sophomore Amir Alexander will be asked to replace Goodes in the lineup.

“Our receivers are very talented and that’s also the group where we’ve got some experience,” Pearson said.

The offensive line is going to be an inexperienced crew, but the Cavaliers still have senior Tristian Summers, a returning starter. He’ll man the right tackle spot.

Left guard is still up in the air.

“Summers gives us an anchor, but that’s a young group when it comes to actual game experience,” Pearson said.

North might have set a county record for successful 2-point conversions a year ago, with Sims and Zay Davis taking turns putting the ball in the end zone. If  North kicks some PATs this year, it’s going to be Khalil Davis, Zay’s younger brother, doing the kicking. Harris will be the punter.

“We’ll kick the PATs until we miss one,” Pearson said. “Then we’ll go for two.”

North’s biggest issue is going to be depth.

Pearson said the Cavaliers only have 40 in the program. That means no jayvee team and it’s going to mean a lot of guys playing on both sides of the ball.

Sam Howard, a former linebackers coach at Harding, is the new defensive coordinator, and will try to find ways to keep everyone healthy and reasonably rested.

Ian Tatum will be coaching the linemen.

North will employ a 3-4 base defense. The linebackers should be a strength.

Jamar Jefferies is making a transition from defensive line to linebacker and is expected to be stout. Bryson Crisco is a sure-tackling inside linebacker who made All-Yadkin Valley Conference in the spring. Khalil Davis is still only a junior, but he’s experienced. Miller, the backup running back, projects as a starting linebacker.

Zion Milton is a returning starter at cornerback. Morrow and Harris, key offensive guys, will man the safety positions, and Pearson is also counting on some of the youngsters on the back end.

North’s new league is expected to be a positive, although sure wins against schools such as North Moore and Chatham Central have been replaced by schools that are traditional rivals of the Cavaliers such as Thomasville and Lexington.

North also is back in the same league as Salisbury, and that’s always fun.  The Hornets and Cavaliers will finish the regular season against each other.

“The new league should be good for us,” Pearson said. “Much shorter trips and we should have some good home crowds. We’re looking forward to it.”

North will tangle with West Stanly at 7 p.m. as part of the Rowan County Jamboree that will be hosted by Salisbury on Friday.

Playoffs: Lost to Polk County in 2nd round