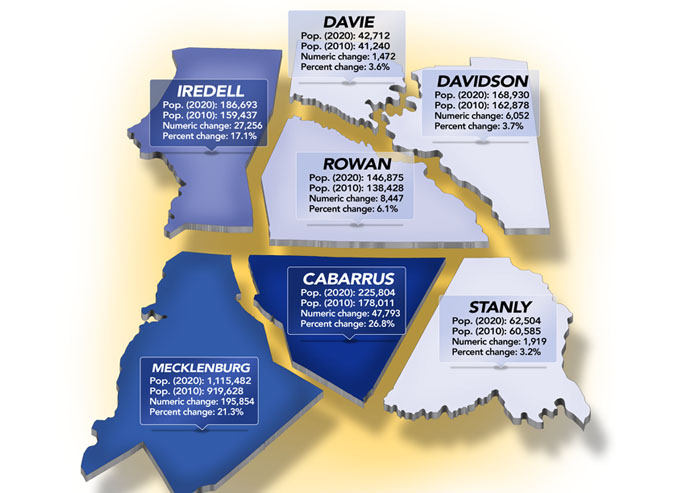 SALISBURY — Data released from the 2020 Census on Thursday show Rowan County grew by 6% in the previous decade, bringing the population to almost 147,000 residents.

The U.S. Census Bureau on Thursday released local-level Census results, which will be used for N.C. lawmakers to draw Congressional and state legislative districts later this year. While the bureau regularly releases population estimates and other data, the U.S. Census occurs every 10 years. Results released Thursday include population totals at the county level along with demographic makeup and changes since 2010.

In April, the Census released congressional and apportionment data with population totals for each state. North Carolina gained an additional seat in the U.S. House for the first time since 2000, when it first reached 13 seats. Overall, the state grew by nearly 10%, totaling 10.44 million residents. Rowan County is currently part of the 13th Congressional district in the U.S. House.

Rowan County ranks 20th among the state’s 100 counties for population.

Of Rowan County’s total population, data show almost 2% of residents, or 2,210, currently live in group quarters, which includes nursing homes and correctional facilities for adults and juveniles. An additional 1,899 residents live in what the Census calls non-institutional group quarters such as student housing at colleges and universities.

Neighboring Davidson County grew by nearly 4% to make a total of 168,930 residents. Data shows 305 people per square mile in Davidson County, which now ranks 17th in the state for largest population.

Davie County also saw nearly 4% growth since 2010 to reach 42,712 residents in 2020. That makes it the 60th most populated county with an estimated 162 residents per square mile.

Stanly County grew by 3% to total 62,504 residents with an estimated 158 people per square mile. It’s 43rd in population.

Wake County, which contains Raleigh, is the most-populated county in North Carolina, with 1.13 million people. While the city of Charlotte has more people than Raleigh, Mecklenburg County is No. 2 in the state, with 1.12 million people. There’s a steep drop-off to third, with Guilford County coming in with 541,299 residents.