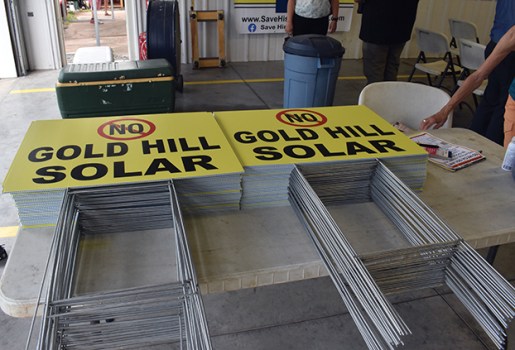 Neon yard sides displaying opposition to the solar project were handed out during an August community meeting. Ben Stansell/Salisbury Post 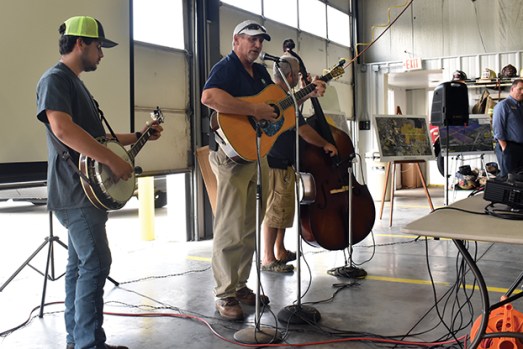 Bluegrass musicians played a few songs before several residents of Gold Hill voiced their concerns about a solar energy facility being planned in the town. Ben Stansell/Salisbury Post 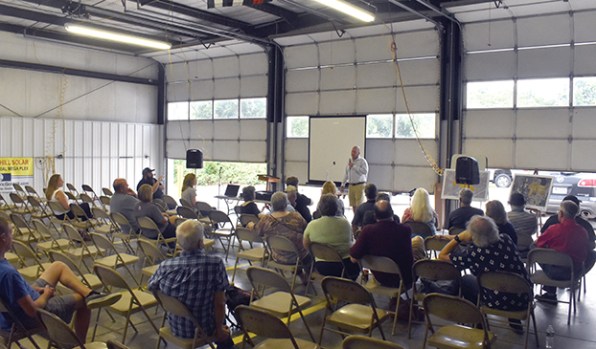 Lance Riley speaks to the people who gathered for a meeting regarding a proposed solar energy facility in Gold Hill. In addition to music and food, the meeting featured several speakers who vocalized their concerns with the project and worked to rally support. Ben Stansell/Salisbury Post

GOLD HILL — There was bluegrass music and food, but Tuesday night’s gathering at the Gold Hill Fire Department was not a typical party.

Several dozen Gold Hill-area residents convened at the department to voice concerns and rally support to oppose a major solar energy facility being planned for a 560-acre plot of land near Old Beatty Ford Road and U.S. 52, not far from the Gold Hill Airpark.

“It’s a contradiction,” said Darius Hedrick, a preservationist and fixture in the Gold Hill community. “It’s covering up the beauty and the history of this area. We can’t let that happen. There’s been too much effort by so many people to make Gold Hill here in east Rowan something that we’re proud of.”

The solar energy facility is being proposed by Birdseye Renewable Energy, a Charlotte-based subsidiary of Dominion Energy. The parcel of land targeted for the site is owned by four separate people and will be leased by the company. The lease will initially be for 20 years, with an option to renew for another 20 in five-year increments.

Birdseye submitted an initial application for the project to the Rowan County Planning Department months ago and a revised application Tuesday.

The proposal is the first big test for Rowan County’s new regulations for solar energy systems, which were passed in April after a moratorium on solar projects that lasted more than a year.

Unlike a community meeting led by representatives from Birdseye in Gold Hill last month, the meeting Tuesday night was conducted by community members who are opposed to the project. Those residents voiced many of the same concerns brought up previously, including the project’s potential impact on the airpark, the town’s historic tourism industry and the wildlife in the area.

John Ritchie, a resident of the Gold Hill Airpark, delivered a presentation listing his issues with the project. Ritchie lives in one of about 36 homes in the private airpark, which are located around a 3,000 foot runway. Ritchie utilized a map to show the take-off and landing patterns of airplanes at the park would go directly over the solar panels. This is a problem, he said, in the case of a crash.

“If, God forbid, you have to have a forced landing for any reason, the engine or something went wrong, you have to glide down into this no man’s land,” Ritchie said. “Going into that in a light airplane, you’re probably going 70 to 80 miles per hour, then you hit steel and glass that’s electrified. It’s a recipe for disaster.”

Ritchie also said the facility would be within a mile from a solar facility being planned in the northwest corner of Stanly County and questioned if that would violate Rowan County’s new solar rules.

Following Ritchie was Lance Riley, who is no stranger to fighting projects with potential environmental implications in Gold Hill. Riley, who has a doctorate in aquatic science from the University of Florida, spearheaded community opposition to the Charlotte-Mecklenburg Utilities Department plan spread sewer sludge from Charlotte over farm fields in the area seven years ago. Riley was living in Charlotte at the time, but has since moved to the Gold Hill area and has decided to help with the fight against the solar project.

Many of the concerns Riley vocalized during the meeting Tuesday night revolved around the potential environmental implications of the solar facility. Riley said the project is being planned for an area that has been designated as a Natural Heritage Area in which a federally endangered flower is located. He also said the project would disrupt wildlife, migration patterns and contribute to stormwater runoff.

Later in the meeting, Vivian Hopkins took the microphone and denounced the solar energy project for what she said would be a negative impact on the area’s historic appeal to tourists.

“We are not opposed to creating electricity in a clean and good way,” said Hopkins, vice president of the Historic Gold Hill and Mines Foundation. “There’s a place for solar, but it’s not here at this particular site.”

The meeting Tuesday night revolved mainly around the proposed solar project, but it was also a fundraiser for the Gold Hill Fire Department. The event’s organizers put a jar for donations on the same table that held bright neon yard signs stating “No Gold Hill Solar,” available to anyone who wanted one.

Matt Brock, chief of the fire department, was one of the last to speak during the meeting. Like others before him, Brock expressed his concerns about the proposed solar facility.

“Let’s just say this caught on fire,” said Brock, pointing to a map of the proposed facility. “One thing, there’s not training out here for firefighters on this. So, we’re going in blind.”

Brock said he was worried the solar facility could impact the department’s fire score, which he said was among the best in the state for rural, volunteer departments.

In addition to airing concerns, speakers encouraged those in attendance to voice opposition to the solar project during the Rowan County Planning Board’s meeting when the project is considered. Community members have launched a website (savehistoricgoldhill.com) where people can sign a petition against the solar facility.

Birdseye representatives were not present at the meeting to address concerns.

Since Birdseye’s revised application was submitted Tuesday, it is unclear if the solar project will be considered by the board during its meeting on Monday, Aug. 23.