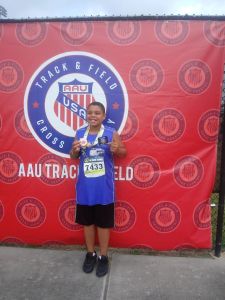 Bralin Ellis of the Rowan Express Track Club finished eighth in the shot put at the AAU Junior Olympics in Houston with a throw of 27 feet, 8 inches.

Owen White (Carson) is back on the mound.

White, a second-round pick by the Texas Rangers in 2018, had been on the injured list (hand) since May.

White recently pitched in a game for the Rangers’ team in the Arizona Complex League and was credited with his first pro win.

White pitched two innings with four strikeouts,  one walk and no hits on Tuesday for the Down East Wood Ducks in a 4-2 win against the Carolina Mudcats.

Corey Seager (NW Cabarrus, Kannapolis Legion) is back from an injury and has been a hot hitter.

He hit his 93rd career homer on Tuesday and is a .294 career hitter in MLB.

Carson’s Hayden Simmerson was clocked at 87 mph on Sunday in a showcase game and pitched his 5 Star Carolina 15U National team into the tournament championship game.

GARS members played at the Revival at the Crescent Golf Club.

David Huneycutt had closest to the pin. Don Carpenter made the longest putt.

Kiger is the grandson of  Salisbury’s Tom Kiger.

Catawba cross country and track and field student-athlete, Tom Joyce, has been named a second team Academic All-American by the  Sports Information Directors of America.

Joyce enjoyed a stellar career at Catawba, which started as a soccer player before moving to cross country and track his sophomore season. A biology major, he graduated with a 3.98 GPA. He earned the South Atlantic Conference Elite 20 Award for the highest GPA among the league’s male track & field athletes.

The deadline for YFL football (grades 2-6) and cheerleading sign-ups is Aug. 15. Register online at http://rcyfl.sportssignup.com/site.