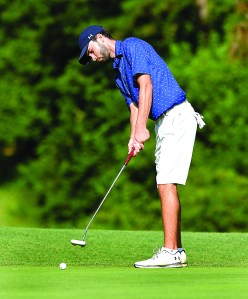 Lyerly played the treacherous Oakmont Course on Monday. The course, considered by many to be the toughest test in golf, crushed a lot of talented players, but Lyerly was steady. He made eight straight pars to start his round. After a rough stretch, he hung in there and finished with birdies on the 17th and 18th holes. He was tied for 16th as far as the players who tackled Oakmont on the first day.

Lyerly played the Longue Vue Country Club on Tuesday morning, a course which has been yielding lower scores than Oakmont. Lyerly shot 72, so he’s at 145.

The low 64 scores will advance to match play.

Play was suspended on Tuesday with many golfers still on the course, so Lyerly’s fate won’t be determined until the second round can be completed on Wednesday.