The Bullhole: Park rises from a place to be avoided to a family-friendly regional resource 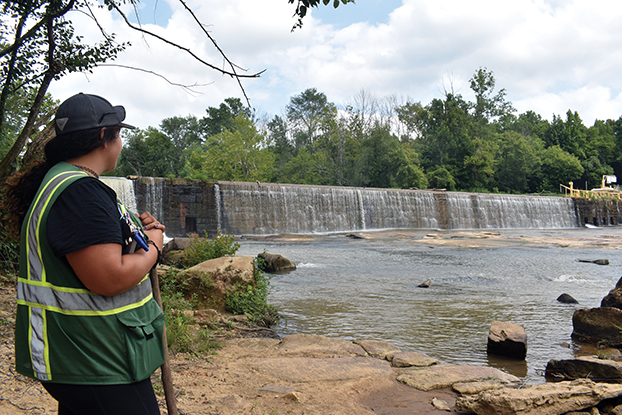 Chelsea Byrne looks out at the waterfalls cascading down the dam at "The Bullhole." The swimming spot has been a gathering place for decades, but has only more recerntly become a place that's safe for families to gather. Ben Stansell/Salisbruy Post

WOODLEAF — Like most teenagers growing up near the border of Rowan and Davie counties, Addison Davis wasn’t allowed to visit “The Bullhole.”

That didn’t mean he never did.

Once or twice, Davis mischievously snuck off to the waterfall and swimming hole located near the town of Cooleemee on the South Yadkin River. The area, unregulated and unmonitored, had become known as a place where misdeeds happened.

“It’s reputation preceded itself,” said John Peeler, who heard about The Bullhole shortly after moving to the area in the 1980s.

That’s why Peeler was shocked when his 10-year old daughter came home from an educational field trip to the Bullhole and only had good things to say.

Suddenly curious about the place, Peeler recruited a Davie County park ranger to give him a walking tour.

“When we got down there, my first sight was broken glass everywhere, a mud puddle with a broken-down backhoe,” Peeler said. “It looked like a place I would not want my daughter to be.”

But he also saw The Bullhole through his daughter’s eyes, focusing, if only briefly, on the cascading falls and lush woods around them.

“It was a pretty spot,” Peeler said.

Others saw it too. In the late 1990s, a grassroots effort led by organizers including Cooleemee Mayor Lynn Rumley and Ken Sales raised millions to turn the Bullhole into a legitimate park — a place where people weren’t afraid to go, and perhaps, even wanted to go.

Their efforts paid off, and in 2003, River Park at Cooleemee Falls was opened to the public. The movement to make the park a regional resource with a good reputation has continued ever since. It’s hastened recently with the hiring of a full-time park manager and even more ambitious plans in place for the future.

Long before The Bullhole was a place to be avoided, it was a gathering spot. First for Native Americans and later in the early 1900s for mill workers and their families who lived in Cooleemee, a town full of company homes built around Erwin Textile Mill.

The Bullhole’s waterfalls, in fact, are generated by the man-made dam used to power the mill, which was built around the turn of the 20th century and operated until 1969.

The area’s iconic name comes from a story in which a bull ox, while dragging lumber across the river, succumbed to the swift current and was carried down the Yadkin, never to be seen again.

There are plenty of other stories about The Bullhole, some of them carrying more truth than others, but the story being told about the area now started around 1998, when the Cooleemee Historical Association began to explore creation of a nature park on both banks of the South Yadkin River.

After an initial site visit, the North Carolina Department of Parks and Recreation encouraged this community-based effort and offered a professional “conceptual plan” for the park in 1999.

Money was raised, grant funding was obtained and the park was built, opening in November 2003 under the direction of a new, independent park board. The 13-member board is composed of representatives from both Rowan and Davie counties, including members from the board of commissioners, economic development agencies and wildlife organizations.

Peeler, who at one time didn’t even permit his own daughter to visit The Bullhole was one of the original members of the park’s board. Davis, who wasn’t allowed to go to The Bullhole, currently serves as the board’s president.

The park itself spans 80-acres and is technically located in the town of Cooleemee, but is split between Rowan and Davie counties. The principal access to the park, where the gate, bathrooms, walking trails and sandy shoreline beach are located, are all on the Rowan County side.

In an internal study conducted by the park board in 2019 using Google analytics, the park’s board found that Google data ranked RiverPark eighth in size and second after Dan Nicholas in Google ratings responses and first in hours spent on site, among parks in the Rowan/Davie/Davidson area. There are an estimated 22,000 visitors to the park each year. 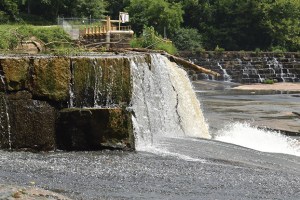 Water splashes over the dam at “The Bullhole.” The park has an agreement with the owner of the dam for the water to flow at full strength on the weekends, when the park is packed with visitors. Ben Stansell/Salisbury Post

The park’s board has guided the since its creation, but perhaps made one of its most important decisions earlier this year. The decision was precipitated in part by the COVID-19 pandemic, which drove an overwhelming number of people to the park last spring.

On the weekend before Fourth of July, the park’s board decided to close its gates. On the holiday itself, board members celebrated by standing out front, turning cars away.

It was an eye-opening experience for Davis.

“As a result of that, we truly began to look at the park, talk about the park, and emphasize that the park is more of a regional draw,” Davis said.

As the board plotted its next move, the park’s gates remained closed through the end of 2020. They didn’t reopen until Memorial Day weekend, and for the first time in the park’s history, visitors had to pay a fee to enter.

“When we implemented the gate fee, we had several people, of course there were the naysayers, but we had numerous people comment that they were glad we’re doing this,” Davis said. “It has become evident in the feedback we see on Facebook and on Google when you do a search about the park, has been very positive.”

Charging a gate fee, Peeler said, was something the board had avoided for years, but finally agreed was the right move.

The gate fee, $5 for a car, $3 for a motorcycle and $1 for walk-ins, allowed the park to hire a full-time park manager for the first time.

The board hired Chelsea Byrne, a “transplant” from New Jersey who had spent the last eight years of her life working in retail. Byrne, who officially took over in May, had moved to Cooleemee not long before with her boyfriend. She’d never even visited the park before interviewing for the position, but now she’s more than familiar with its 80-acres.

“Chelsea is an absolute dream,” said Ashley Honbarrier, a park board member. “People talk about struggling with applicants and hiring and we did get several to come through and show up for the interviews, but I don’t think we knew exactly what we were looking for, but Chelsea is it.”

Byrne has enjoyed working around lush forests, running water and rolling hills instead of around cash registers and price tags.

“It’s the best office in the world,” Byrne said.

She patrols the park six days a week in an old Kawasaki Mule — a green utility vehicle that has seen its fair share of use and makes a disconcerting, cantankerous cough when switching gears.

Replacing the Mule is one of the park leadership’s top priorities. Perhaps the most pressing goal is to build a gatehouse at the park’s Rowan County entrance. Currently, Byrne and two staff members collect gate fees from a pop-up tent and table that’s devoid of any air conditioning.

The dream of constructing a gatehouse became a reality on Monday night, when the Rowan County Board of Commissioners approved spending $15,967 to help build the structure.

The gatehouse, Davis said, will give the park a much more professional outward appearance. Byrne said the cool air will be nice. 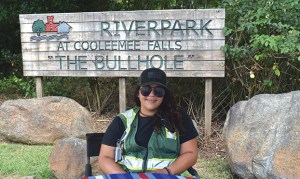 Chelsea Byrne seated at the current gatehouse, which is a simply tent and table near the front gate. The temporary structure will eventually be replaced with a permanent gatehouse. Ben Stansell/Salisbury Post

Loftier, longer-term goals harbored by the park’s leadership include construction of a pedestrian bridge over the Yadkin River, which would connect the two counties and could lead to more park development on untapped acres on the Davie County side.

“We want to put in a bridge across the river to tie the two sides of the park together, because half of it is Rowan and half is in Davie,” Davis said. “Once that happens, it’ll take some work to get there because it’s an expensive proposition, but once that happens, it will have a really positive impact on the local economy.”

An even more ambitious goal, which will likely take years to achieve, is to make the park a North Carolina state park. The minimum size of a state park is 400 acres, which means River Park has a lot of growing up to do before it can reach that milestone.

In the meantime, Byrne and the park’s board are focused on making the park as safe and fun as possible, while preserving its natural elements.

“This is a special place to a lot of people and we just want to do it justice,” Byrne said.

They’re well on their way to doing that. The park has become a hot spot for day trippers from the entire region.

Despite all the changes that have been made to the park, its leadership is still working to break down the stereotype that The Bullhole is a place where bad things happen. The tide is turning. Byrne is very proud of the park’s 4.2 rating on Google and is even more excited when she sees positive comments from parents who have visited the park with their children.

“My favorite moments are by far seeing a family come again and again and again,” Byrne said. “And then on they’re way out, they’re thanking me for what we’re doing here. That keeps me going everyday.”

Erin Bitterman, who lives in Lexington, brought her children to the park Wednesday morning for the first time. She’d seen her friends on social media post pictures at The Bullhole and wanted to see what the fuss was about. Bitterman reported that their time spent was fun, and that they would be coming back.

A mom bringing her children to The Bullhole would’ve been unimaginable decades ago. Now, it’s commonplace.

“On morning they opened the park and the first two people that came in there were two minivans with moms and kids in them,” Peeler said. “That’s the first time I’ve seen that ever at the park and that was very reassuring and comforting to know a mom can take her kids down there and feel safe.”

Peeler will be one of many gathered around the park’s shoreline on Saturday for The Great Bullhole Duck Race, which is the park’s largest annual fundraiser.

During the family-friendly event, people crowd around the shoreline to watch thousands of ducks dumped from a front loader race 100 yards down the Yadkin River.

This year’s duckie dash will be held Saturday. It costs $5 to enter one duck, $20 for a quack-pack (five ducks) and $100 for a flock (25 ducks). First place nets $250, second gets $100 and third takes home $50. Tickets can be bought at the gate every day the park is open, cash only at this time. All of the proceeds go to fund the park’s operation and infrastructure.

More information about River Park at Cooleemee Falls can be found online at www.facebook.com/riverparkatcooleemeefalls.