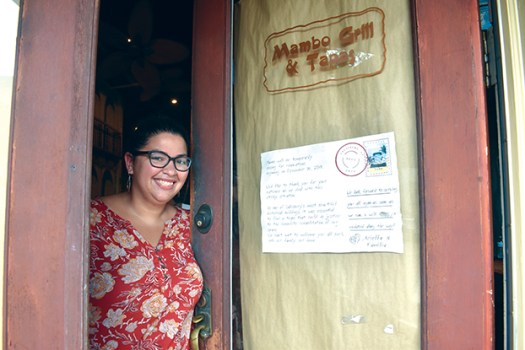 Ariella Sanchez looks out from the front door of Mambo Grill & Tapas. The restaurant has been closed for 19 months due to a complicated renovation process, but Sanchez is determined to welcome customers back in the coming months. Ben Stansell/Salisbury Post 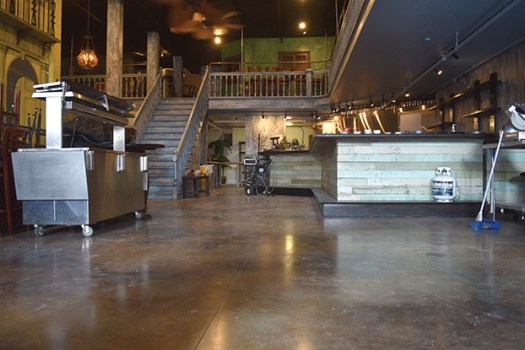 The new floors in Mambo Grill & Tapas. Replacing the old, deteriorating wooden floors was the main reason why the restaurant closed for renovations. Once the process started, a number of other issues popped up that extended the eatery's closure. Ben Stansell/Salisbury Post 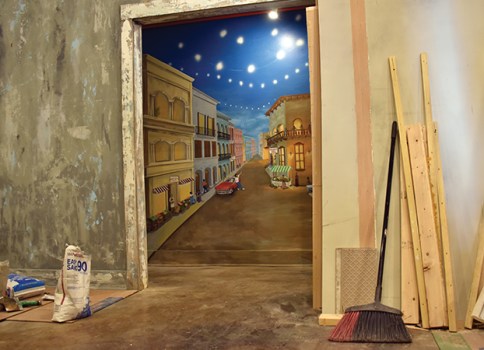 During the lengthy renovation process, Ariella Sanchez commissioned a few new paintings inside the restaurant. This piece of artwork, completed by a Charlotte-based artist, depicts an idyllic Cuban street. Ben Stansell/Salisbury Post

The restaurant’s staff and customers were celebrating the eatery’s impending closure, a temporary shut down for renovations to the building’s deteriorating hardwood floors.

While the floors in the 110-year old structure on East Fisher Street were historic, they had also been deemed a safety risk and had caused more than a couple customers to lose their footing — literally.

“People were getting stuck to the floor and losing shoes,” said Ariella Sanchez, the restaurant’s owner. “The floors were absolutely horrible.”

Looking forward to the prospect of new and improved floors, as well as a few other upgrades, Sanchez and her team turned the last night the Cuban-inspired restaurant was open into a celebration.

The joyous spirit didn’t last long. The renovations, expected to take between four and six weeks, were extended after construction crews unearthed other “surprises” that had to be addressed. With the COVID-19 pandemic complicating matters further, weeks turned into months, and months into well over a year.

Mambo Grill & Tapas has now been closed for inside dining for 19 months. Those months have worn on Sanchez, who found herself wondering if the celebratory party was, unbeknownst to anyone at the time, a going away party.

“It has sometimes felt like it doesn’t matter what I do and how much I push and try to stay positive for everybody else that needs me to be, and how hard I work to make this happen,” Sanchez. “I think at the end of (2020), I felt the heaviness of it not mattering how much I fought.”

The renovations have been moving at a slower pace because of the historic nature of the building. The goal, Sanchez said, has been to improve the restaurant while maintaining the character of the space.

Through it all, Sanchez said she found strength in the resilience she learned from her parents, who came to the United States from Cuba in the 1980s in search of a better life.

“The Cuban people are known for their resilience and for making beautiful things out of buildings and cars and things that most Americans would probably just give up on and completely gut,” Sanchez said. “Somehow they make the ruins beautiful. It’s been fun and humbling to get to honor that part of my heritage and generationally being able to pull on the strength my parents had.”

With her familial support, Sanchez is determined to reopen Mambo Grill & Tapas to the public once again. The only question is when.

Mambo Grill and Tapas originally opened at the Innes Street Market in 2008. The restaurant was a family effort led by Sanchez’s father and brother-in-law. The eatery moved to South Fulton Street in 2010, where the demand for its authentic Cuban dishes like Puerco Asado continued to grow.

“We have a very specific cuisine,” Sanchez said. “These are our family recipes. My brother-in-law is cooking. My mom, it’s her desserts and it’s my dad’s recipes. When you come here and dine with us, it is like you’re dining with us at our kitchen table at home.”

The restaurant made the move to 122 E. Fisher St. in early 2016, merging with MG Lounge and adding a vibrant nightlife component. When open, the restaurant offers 20 different taps of beer (one of the largest craft beer menus of any Cuban restaurant in the country, Sanchez said) and also mixes up cocktails.

The typically lively restaurant has been quiet since it closed for renovations, forced to serve customers food to go out of a side door only a couple nights per week.

Along with her bartenders, kitchen and wait staff, Sanchez eventually had to find employment outside of the restaurant. She landed a full-time position as an interpreter and family advocate with Prevent Child Abuse Rowan, where she’d volunteered for a half decade before.

Suddenly, she found herself serving others in a different way than she was used to at Mambo Grill & Tapas.

“I know it’s silly, but I feel like serving a plate of food to someone has the capacity to give someone a moment to either share a memory or take a moment to decompress,” Sanchez said. “I get to do that with the plates of food we serve them at Mambo. Working with Prevent Child Abuse, I get to nurture families in a completely different way.”

Sanchez said her job at Prevent Child Abuse Rowan kept her busy and sane while the renovations became more frustrating. The Mambo on Ruedas food truck, which has popped up at events and breweries throughout the region, has also been a way for her to stay hopeful and ensure Mambo stays present in the community.

Whenever Sanchez and her crew work an event, especially in and around Salisbury, they’re peppered with questions about when Mambo Grill & Tapas will reopen. Mambo’s staff, many of whom have found homes in other local restaurants and bars have experienced the same well-intentioned interrogations.

Sanchez said she never has a satisfactory answer for customers when they ask. Her plan is to have the restaurant reopened by the fall, but she realizes it might be closer to the end of the year.

“We want to be open and serving our guests and making drinks and serving beers for hem as much as they want to be here, eating and enjoying the full experience,” Sanchez said. “We’re doing everything we can to open, regardless of everything that gets thrown our way.”

Regardless of when Mambo finally does reopen our doors, Sanchez said she’ll be thrilled to welcome customers to the new and improved space.

“Overall we’re just excited and looking forward to opening doors again and hearing the sounds of people laughing and mojitos shaking and the kitchen bustling,” Sanchez said. “I can’t wait for this building to feel alive again.”

It’ll be a party.