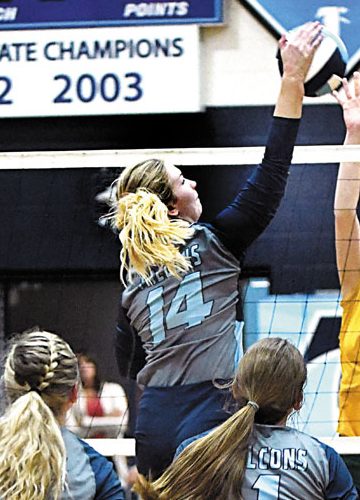 Senior Kelcie Love was second on the team in kills as a junior and is expected to be one of the county’s top hitters. She’ll be on the court for more rotations than in the past, as she continues to improve her mobility.

“She’s making the transition from middle to outside this year, and that’s an adjustment,” head coach Jan Dowling said. “You don’t get those easy kills that come your way in the middle, but you get more sets and you generally get better sets.”

Emma Clarke, a three-sport phenom, was impactful as a freshman last season. She’ll be a force operating at the net with Love.

“Very coachable, as long as I can relate a volleyball situation to softball or basketball,” Dowling said with a laugh. “She’s just really talented — a 6-foot beast.”

Noe Gaeta has been a smooth setter for two seasons and made good decisions during the Falcons’ powerful stretch run to the 3A state semifinals in 2019 after Allison Ennis was injured.  Gaeta will get the ball to Clarke and Love in positions where they can put it down.

West’s most improved player is Anna Grace Blackledge, a junior who should get her share of kills.

Blackledge has done a ton of fitness work in the off season. She’s lighter. She’s reacting quicker and jumping higher.

“A coach who saw us the other day asked me if she was new,” Dowling said. “We had her last year, but not like this. She’s a different player.”

Ashlee Ennis and Madelyn VonCanon are juniors with a wide range of skills, so they could have multiple roles. Ennis is one of West’s best diggers, but she also could hit some.

Dowling, who will be assisted by former South Rowan and Lenoir-Rhyne player Emma Pope, usually works a lot of people into a match, so they’ll all get chances to help.

It was tough for West not making the playoffs in the COVID-shortened 2020-21 season, especially after setting school records in 2019, but the Falcons have a good chance to get back on track.

“COVID hurt us a lot,” Dowling said. “Without a normal off-season and then that very short season, it was over before we ever put it all together. I’ll be disappointed if we can’t bounce back this year.”

West wasn’t required to play North Iredell and South Iredell, but Dowling has those always stout rivals on the schedule as non-conference opponents.

Actually, the whole non-conference schedule promises to be challenging.