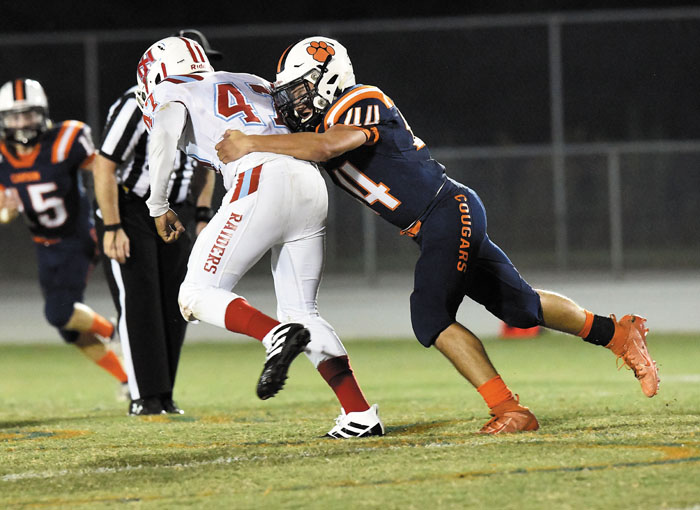 Carson's Carter Dowd (44) will be a key on defense and may be called on to carry the ball more also. File photo by Wayne Hinshaw, for the Salisbury Post

CHINA GROVE — Take a quick glance at the Carson football roster, and it appears the Cougars are starting over.

CP Pyle, Jake Harris, Andrew Rollins, Alex London, AJ Merriman, Aaron Bradshaw — the first guys who popped in your head when you thought about Carson football the last couple of years, have moved on.

But head coach Daniel Crosby insists Carson isn’t taking a step back. He believes the program is solid enough that there are capable replacements on the assembly line. Backups and youngsters moving up from the jayvees have been groomed to fill the holes. Crosby is confident they’ll come through without a drastic learning curve.

The team’s strengths appear to be the offensive line and the linebackers. That’s where most of the seasoned guys are.

“The amount of improvement we showed from the first year I was here to the second was huge,” Crosby said. “The difference in our level of competitiveness was night and day, and we’re excited about continuing to get better every day. We’re going to be playing a lot of inexperienced guys,  but we believe they’re ready for the challenge.”

Some of the adrenaline in the program comes from the way Carson finished off the COVID season on April 9. The 56-55 overtime win against South Iredell — Carson put the ball in the air 34 times — was one for the books. It was only the third win of the brief season for Carson, but there also were three other games that Carson could’ve won with one more break.

Carson had 68 practicing last week, so it will field small varsity and jayvee squads for a 3A school. Health, obviously, is going to be critical.

There are just eight starters returning, four on each side of the ball. Kicking and punting, things the Cougars haven’t had to worry about for a long time, also are going to be in inexperienced hands — at least at the varsity level.

The Cougars were exceptional on offense last season, posting their most prolific offensive numbers since the strong 2010 team, but there were shootout losses with scores such as 43-40, 43-31 and 48-28. Carson had sturdier defensive numbers than it had in 2019, but there’s still plenty of room to get better.

Hunter Burris, a senior who was the backup quarterback as well as a starting cornerback last season, takes over at QB. He’s an athlete who also starts for Carson in basketball and baseball.

“He’s a good runner and he’s good at running our offense,” Crosby said. “No worries about him, except keeping him healthy. He’s not the biggest guy.”

Who will Burris throw to? That’s a fair question. Three guys caught a ton of balls last season, but two were seniors and Emory Taylor, another of the school’s multi-sport standouts, isn’t playing football this year.

Weston Lee will be a starting safety, but he also is the leading returner as far as receptions. He had 13 catches, including a touchdown. Easton Mullis, who caught a TD pass in the wild victory against South Iredell, is back in an H-back role. New receivers include Cade Cranfield, C.J. Guida, Michael Guiton, Trevor Vaughn and Jay Howard.

Howard, a rangy basketball player, is giving football a try.

Jordan Galarza, the top jayvee running back, got 15 varsity carries and scored a TD last spring. He could be the workhorse back. Crosby also sees an expanded ball-carrying role for Carter Dowd, who was a goal-line option in the spring when he put the ball in the end zone five times.

“We’re going to be very inexperienced at the skill positions,” Crosby said. “But we feel good about those guys.”

The offensive line looks sturdy. Cole Carmack and Coby Sandusky are veteran starters, although Sandusky is expected to make a move from right guard to center. Right guard Caleb Moore is another senior with experience. Tristan Ruhnow is at the top of the depth chart at right tackle. Bryson Bare (6-foot-3, 280 pounds) and Tristan McBride are sophomores with plenty of size. Garrett Christy and Drue Gillis are in the mix. Gillis is capable of stepping in at any of the five 0-line spots.

Brendan Lettice is expected to handle kicking duties, with Graham Yarbrough, who plays several positions, ready to do the punting.

Defensive lineman Joseph Giles could become a star. The junior has been a starter since he was a freshman. He’s played on both lines, but the plan is for him to be a full-time defensive lineman this season. Giles and McBride will man the interior line spots and should slow down running teams. They’ll get help from Sam Pepper.

“Hill is a very tough kid and Collins has bounced back well from an injury that kept him out in the spring,” Crosby said.

Carson’s linebackers should be solid. Dowd and Austin Cook are two of Carson’s most experienced and dependable players. Jake Ross, Carter Breitzman and sophomore Connor Rayfield will be factors.

The defensive backs will be mostly new. The Cougars are counting on returner Lee and newcomer Vaughn at safety, with assistance from Carson Aman and Josh Heath. Drew Masingo, Cody Samples, Christian Kluttz and Ryan Adkins are the cornerbacks. Adkins might be the fastest player on the team.

There are sure to be some growing pains with so many new faces, but Crosby is ready for that.

“We’ve got four non-conference games before we play that first league game (West Rowan, Sept. 17) and our kids will have a chance to get some experience,” Crosby said. “We feel good about what we have.”

The last winning season for Carson was in 2015, while the last trip to the playoffs was in 2016.

Barry Mitchem,  who was retired for six months, is back to help out with the offensive line and rejoins familiar staffers such as Jason Stanley, Jason Rollins and Josh Trexler.

The Cougars have a scrimmage with West Davidson planned. They’re also the team that gets to tackle Salisbury in Friday’s Rowan County Jamboree.