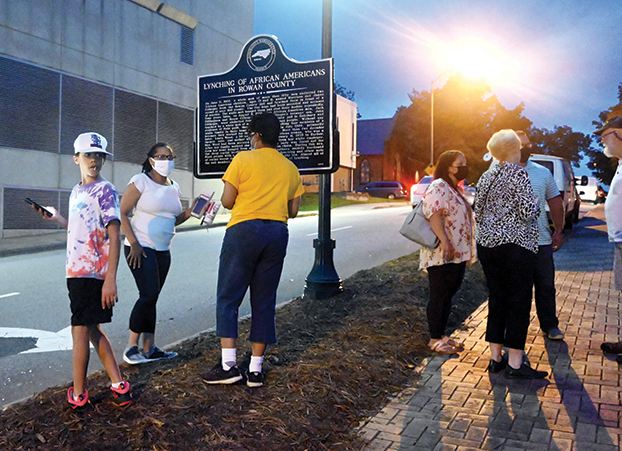 But a focus on truth gathered around 125 people at Soldiers Memorial AME Zion Church for the opening service of “Truth Be Told,” which features two days of events surrounding the dedication of a historical marker that memorializes six Rowan County lynching victims.

Members of Salisbury’s Actions in Faith and Justice organization have worked since 2017 with churches, Alabama-based Equal Justice Initiative and local residents to install a historical marker acknowledging the lynchings that took place in Rowan County between 1902 and 1930. The marker now sits adjacent to the Rowan County Detention Center and close to the original Rowan County Courthouse — from which three Black men, Jack Dillingham, Nease Gillespie and John Gillespie were abducted and dragged to what is now North Long Street and lynched by a white mob in 1906. The three had been accused of the ax murders the Lyerlys, a white family who lived in the Unity Township at Barber Junction.

Just four years earlier, Harrison and James Gillespie, aged 13 and 11, were lynched. Wife and mother, Laura Wood, was lynched in 1930 at the age of 59.

The historical marker is placed outside of Oak Grove-Freedman’s Cemetery, which contains more than 150 mostly unknown African-American men, women and children. In April, the city issued a certificate of appropriateness to install the marker, which shipped from EJI’s headquarters in Alabama.

Rev. Olen Bruner, co-chair of Actions in Faith and Justice, said the purpose of Friday’s event and the symbolic installation wasn’t lynching. It was inequity.

“It’s about understanding what has happened in our past so that we can talk with another to create a brand new future,” Bruner said. “I’m a firm believer that this is not an erection to some horrific act that took place. History is history. A lot of bad things happened in our past. But when we’re able to come face-to-face with another, talk about it to understand what happened or, more important, how do we go forward is really what this remembrance should be about.”

AFJ Co-chair Susan Lee asked all attendees to take a moment of silence to contemplate what Soldiers Memorial AME Zion Church — because of its location in downtown Salisbury — witnessed during the Jim Crow era and continues to witness today, citing mass incarceration, racial profiling and unnecessary use of force on people of color as “things we’ve come to know as Jim Crow 2.0.”

“When we stop trying to hide racial injustice and trying to hide from the pain it causes, the work of reimagining and recreating this world begins,” Lee said. “As people of faith, we believe in things not seen. And we act on that thing. In the just world that faith builds, this church will no longer look out at a jail disproportionately filled with people of color, many of who have not been proven guilty. They’re held months and sometimes years before standing trial.”

Included in the marker’s narrative is the Salisbury City Council’s decision in January 2019 to adopt a Resolution of Reconciliation condemning “all acts of violence and racial terrorism perpetrated against African-Americans, from which they were not rightfully protected during the Jim Crow era” and initiating the process of “reconciliation of racial injustice.”

Lee said the inclusion of the resolution aims to hold city leaders accountable to their commitment of eliminating racial inequities and wrongful disparities.

“According to Hebrews 11:1, faith is the belief in things unseen,” Lee said. “And truth be told, justice for all is a thing unseen both in our community and in our nation.”

In her remarks, Mayor Karen Alexander referenced 1 John 3:18 in which God calls on his children to love with actions and in truth, not with words or speech.

“It is important to tell all of our history, the good, the bad and the ugly, which reveals our fragile humanity and important lessons in mercy and love,” Alexander said. “This project is an important next step in the ongoing work of building bridges, of fostering better understanding and deeper compassion as we all commit to continue the symbolic and transformational work toward racial justice.” 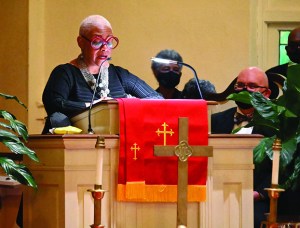 When Green took the podium as Friday’s keynote speaker, she shared how she has worked to redefine her storytelling by owning her history “with an intentional focus outside of the traditional white gaze.”

I weep for all I do not know about you

I weep with the bullet that is lodged in my throat

Whispering its own requiem

The bullet, the bullet

The bullet, the bullet

The red of the bullet cries out your name

… I want to be the water

The sweet oils that rub into the skin of you

I want to hold your bones steady

So your mother can identify your face

And rub the soft earlobes she’s kissed a thousand times

Green said she used to visit historical markers to learn something. That was until she visited Montgomery, Alabama, home of the National Memorial for Peace and Justice commemorating Black victims of lynching in America. There, Green said, she experienced the full comprehension of what it means to embrace the nation’s histories.

Green said she also witnessed the “perpetuation of white supremacy” in the form of white individuals gossiping, taking selfies and viewing the experience as just another day out.

“White supremacy in America and related violence does not begin or end with racial terror lynchings, and it is not exclusive to extremists and extremism,” Green said. “It is not always the face of the neo-Nazi or the KKK member. Often, it’s your neighbor, your family member, your classmate, your coworker, that nice lady that sells the best tomatoes at the farmers market.”

Green said landscape and nature is always a witness and an accomplice, against its will, in the history of racial terror. She articulated her experience visiting the plantation where her great-grandfather was sold for $17 in “I Wanted to Ask the Trees”:

I wanted to ask the trees

But the ground spoke first

Who cry out to me

Plantation ground scratches the soles of my feet

Ancestors begging me to lie down

They’ve waited so long for this day

When someone would come and dance with their spirits

They are everywhere, whispering

Holding up this house that bares to ignore them

Holding up a sanitized history and herstory

One for the trees, one for us

I wanted to ask the trees

Did you refuse to hold his weight?

Did your branches crackle?

Did you refuse to hold him?

Did you feed his blood to your roots?