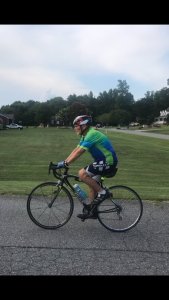 Livingstone graduate Quanera Hayes reached the  finals of the 400 meters in Tokyo but fell short in her bid for a medal.

Absher coached War Eagle basketball for 19 seasons and has coached in North Carolina for 33 years.

The next stop for him is Sunset Beach.

East Rowan rising junior pitcher Chance Mako, an NC State commit,  has been invited to try out for next year’s Team USA 16/17U squad.

Rowan Little League 12U plays the Indiana champs at 4 p.m. on Wednesday in the first round of pool play in the World Series in Greenville, N.C.

Michael Childress made and eagle and shot  3-under 68 at Bermuda Run East in pre-qualifying for the PGA Tour’s Wyndham Championship.

Childress advanced to Monday’s second round.

Beaver has overcome a stroke and has continued to cycle. He’s biked  122,300 miles over the last 25 years.

Reynolds ranks second  all-time for the 49ers in passing yards.

Salisbury was fifth, while South Rowan was sixth.

West Forsyth held off a tough challenge from Reagan, 98.5-94.5, to capture the CPC Cup.  Davie was fourth.

North Carolina champion Fuquay-Varina is 3-1 in the Mid-Atlantic Regional being played at Asheboro’s McCrary Park.

Fuquay-Varina will play today  at 1:30 p.m. Also still alive in the double-elimination is unbeaten Maryland, which edged Fuquay-Varina 7-6.

The other six teams, including host Randolph County, have been eliminated.