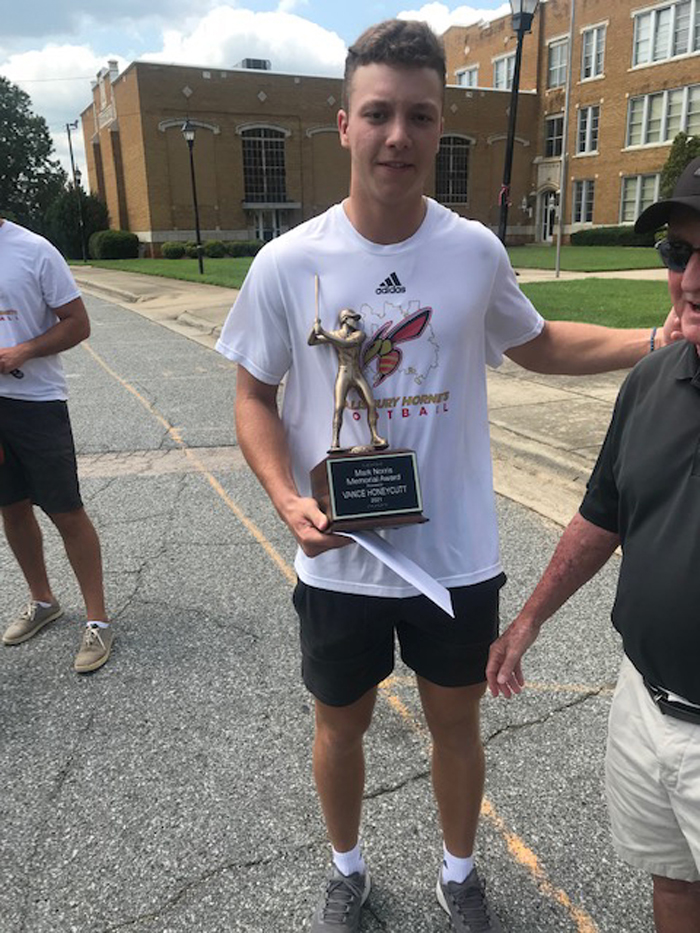 SALISBURY — It was Tuesday, July 13, and Salisbury High graduate Vance Honeycutt was interested in what was going on with regard to the final day of the MLB draft, but he wasn’t exactly following it.

He was too busy to think about it, sweating through an afternoon weightlifting session in Chapel Hill.

“Then, one of the coaches yelled, ‘Hey, Honeycutt, you just got drafted — but you’re staying in school.'”

Honeycutt was a 20th-round pick in a 20-round draft by the San Francisco Giants, the 596th player chosen, so there was never much doubt about the staying-in-school part.

“It was exciting to be drafted as a high school player and also humbling,” said Honeycutt, a big, fast shortstop who batted .548 for the Hornets and scored 23 runs in 12 games. “The Giants did contact me, we talked a little bit and they did make an offer, but it never got very serious. My goal is to get bigger, faster and stronger over the next three years and hopefully, I can put myself in position to be drafted again (in 2024).”

Honeycutt didn’t comment on the size of the Giants’ offer, but he was offered substantially more than the $125,000 signing bonuses that landed the Giants their 13th, 18th and 19th-round picks. That 18th-rounder was Hunter Dula, a pitcher from Division II champion Wingate.

Honeycutt was with the Rowan County American Legion team for about 10 days before he headed to Chapel Hill. He practiced with Rowan County and also played in a handful of games, so intriguted scouts could get a look at him. He launched one home run.

“Legion was super-fun, great coaches and great guys,” Honeycutt said. “I wish I could have stayed around longer, but I had to report to summer school at UNC.”

Honeycutt was a skinny kid when UNC offered him a scholarship a couple of years ago. Actually, that offer surprised a lot of people. Now he’s 6-foot-3, 195 pounds, and looks like he could wrestle a grizzly bear on even terms. Now it’s obvious UNC knew what it was doing. If the stays healthy, you’ll be hearing and reading about him.

Honeycutt’s summer-school days were almost as regimented as if he’d enlisted in the military. He got out of bed at 6:15, ate breakfast and took a team walk. Then it was lifting, class and study hall. D-I baseball is a full-time job, but it’s a fun job, and he did have some free time in the evenings.

“I’m loving Chapel Hill,” Honeycutt said. “I was really worried about getting homesick, but they keep you too busy to be homesick.”

Honeycutt is on a break now and is back in Salisbury, spending some quality time with his family. There’s a beach trip planned for next week. He’ll return to Chapel Hill on Aug. 15.

It’s a remarkable family. Both of Honeycutt’s parents were stars at North Rowan and were UNC athletes. Vance’s father, Bobby, played baseball for the Tar Heels. His mother, Leah Ann, was quite a runner back when she was Leah Ann Miller and competed in track and field for the Tar Heels. Vance’s crazy wheels come from the Miller side of the family.

The three Honeycutt children have all been Rowan County Players of the Year.

Kayla was 2014 2A state champ in tennis. Julia also stood out in tennis, but she was best known for her exploits on the soccer pitch.

Eric Norris, whose family annually presents the Mark Norris Memorial Award to the Rowan County Baseball Player of the Year, was thrilled to get to meet the Honeycutts on Tuesday in a small gathering in the Salisbury High parking lot that attracted among others, Honeycutt’s grandparents, Salisbury High’s baseball coaches and SHS principal Marvin Moore.

Sammy Miller, Honeycutt’s grandfather, is 80 now but still looks too young for Social Security. He’s something of a legend in Spencer, a blazer for North Rowan in its debut season of football in the fall of 1958.

Every Mark Norris Memorial Award winner is important to Eric Norris, who has provided the award since the first one went to Salisbury outfielder Clai Martin in 1978.

But the Salisbury winners always mean a bit more to Norris. That’s because he graduated from the school in 1967, back when it was known as Boyden High.

Honeycutt is the first Salisbury Norris Award winner in a decade. Philip Tonseth, a 2015 graduate of West Point, was the 2011 winner.