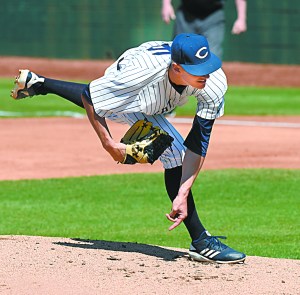 A left-handed pitcher, Ketchie was South Atlantic Conference Pitcher of the Year in 2021 with a 10-1 record and 1.82 ERA.

Harwood used a 6-iron to ace the 157-yard No. 8 hole. A host of golfers witnessed the feat.

Childress was honored for the second straight year.

Golfers must have a  stroke average under 76.0 and a GPA of 3.2 or higher for the All-America honor.

GARS members played the third round of their annual ABCD Tournament at  Corbin Hills.

‘A’ Fight winner was Hal Jordan with a net of 60.15. ‘A’ Flight low gross winner was Larry Petrea.

Griffin won closest to the pin on the No. 2 hole, while  John Struzick made the longest putt on No. 9.

Carson rising senior Mary Spry has added an offer from Converse to earlier offers from Catawba and Emory & Henry.

Deven Youker (Carson) is the rear changer for the Brett Moffitt-driven Chevy in the Xfinity Series.

Moffitt, 2015 Cup Series Rookie of the Year and 2018 Camping World Truck  Series champion, is a grandson of Richard Petty.

Next race is at Watkins Glen, N.Y., this Saturday.